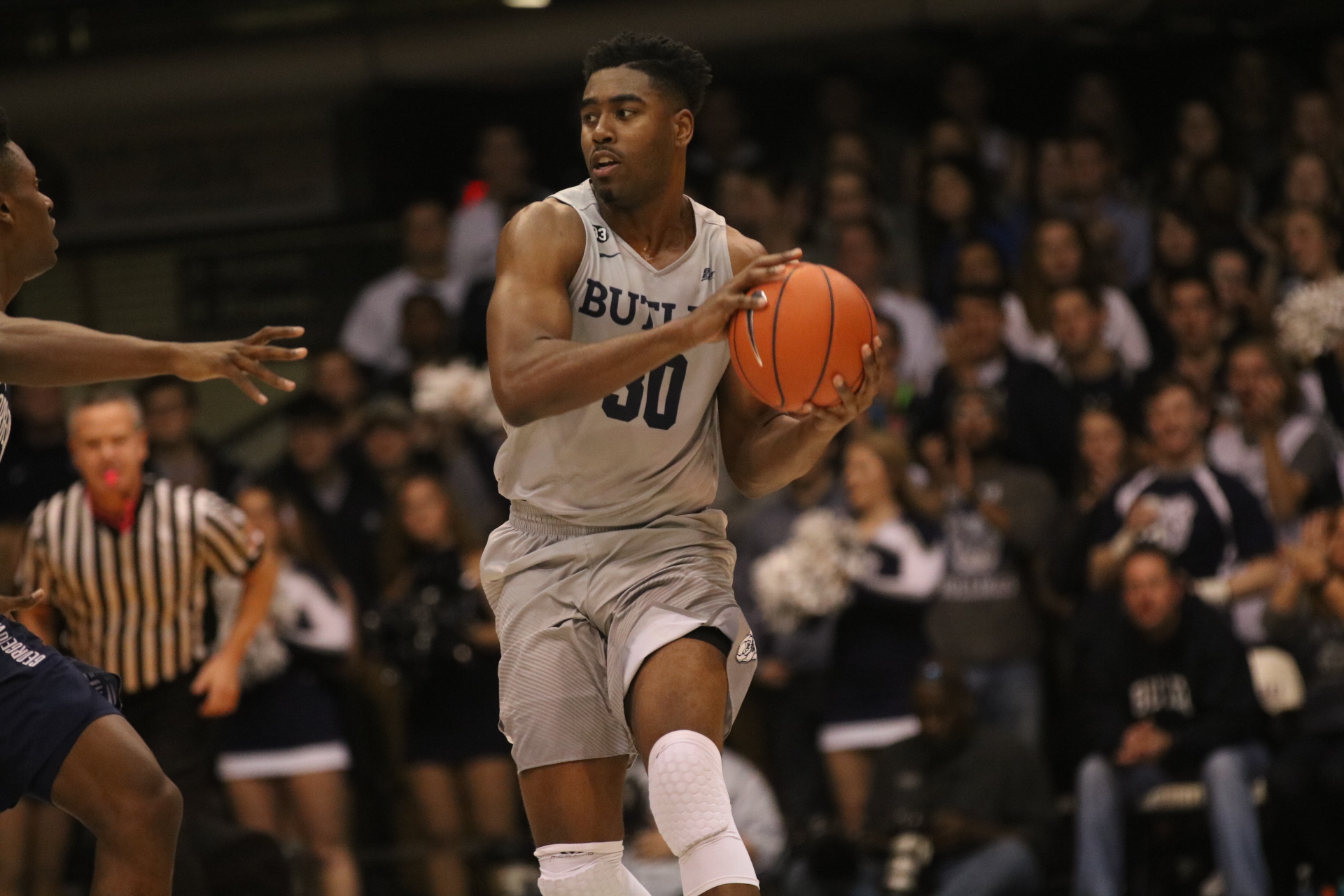 Kelan Martin looks to make a pass to a teammate. Martin led Butler in scoring with 22 points. Photo by Jimmy Lafakis.

The No. 11 Butler University men’s basketball team fell to the visiting Georgetown Hoyas 85-81 on Jan. 28 in front of a sold out crowd in Hinkle Fieldhouse.

Poor defense caused the Bulldogs (18-4, 7-3 Big East) to lose just their third Big East contest of the year. The defensive struggles showed in the second half as the Hoyas went 16-of-22 (73 percent) from the field and 6-of-10 (60 percent) from three point range.

“I just thought we had some of us that just had zero grit to us tonight defensively, just zero,” head coach Chris Holtmann said during the postgame press conference. “I’ve obviously got to do a much better job of getting guys to understand how important that is going to be.”

Due to the lack of defensive intensity, three Georgetown (12-10, 3-6 Big East) players finished with at least 20 points. L.J. Peak led the Hoyas with 22 points and six assists. Rodney Pryor, who didn’t score in the first matchup against Butler, ended the night with 20 points, and Jessie Govan matched him with 20 points of his own.

Govan, who had made just two three pointers in Big East play prior to the contest, went 3-of-3 from behind the arc and 8-of-9 from the field. His last three, a forced shot from the top of the arc as the shot clock was about to expire, essentially sealed the win as it put Georgetown up 82-77 with just one minute left.

“Govan’s three at the end of the game, that’s completely on me,” Andrew Chrabascz, who contested the shot, said. “Just cause of the rotations and like I said, he was way too comfortable already.”

On the offensive end, Kelan Martin led the team in scoring with 22 points on an 8-of-15 shooting performance. Chrabascz contributed 16 points while Kamar Baldwin was the only other Bulldog in double figures with 10 points. Tyler Lewis recorded a team high 5 assists.

In line with past performances, the Bulldogs had a slow offensive start but found their rhythm towards the end of the half. The team finished with 52 percent shooting from the field, but their defense allowed the Hoyas to shoot 56 percent from the field in the first half. Butler led 41-40 at the break.

With the loss, Butler’s record at Hinkle Fieldhouse this year is 11-1 and their 14-game home winning streak was snapped. Furthermore, this marks the first time Butler has lost under Holtmann when scoring 80 or more points. They are now 30-1 when doing so.

The next game won’t be any easier as the Bulldogs host the No. 16 Creighton Bluejays on Jan. 31 at 7 p.m. in Hinkle Fieldhouse. The game will also air on FS1. The Bluejays handed Butler a 75-64 loss at the CenturyLink Center Omaha in Omaha, NE on Jan. 11.