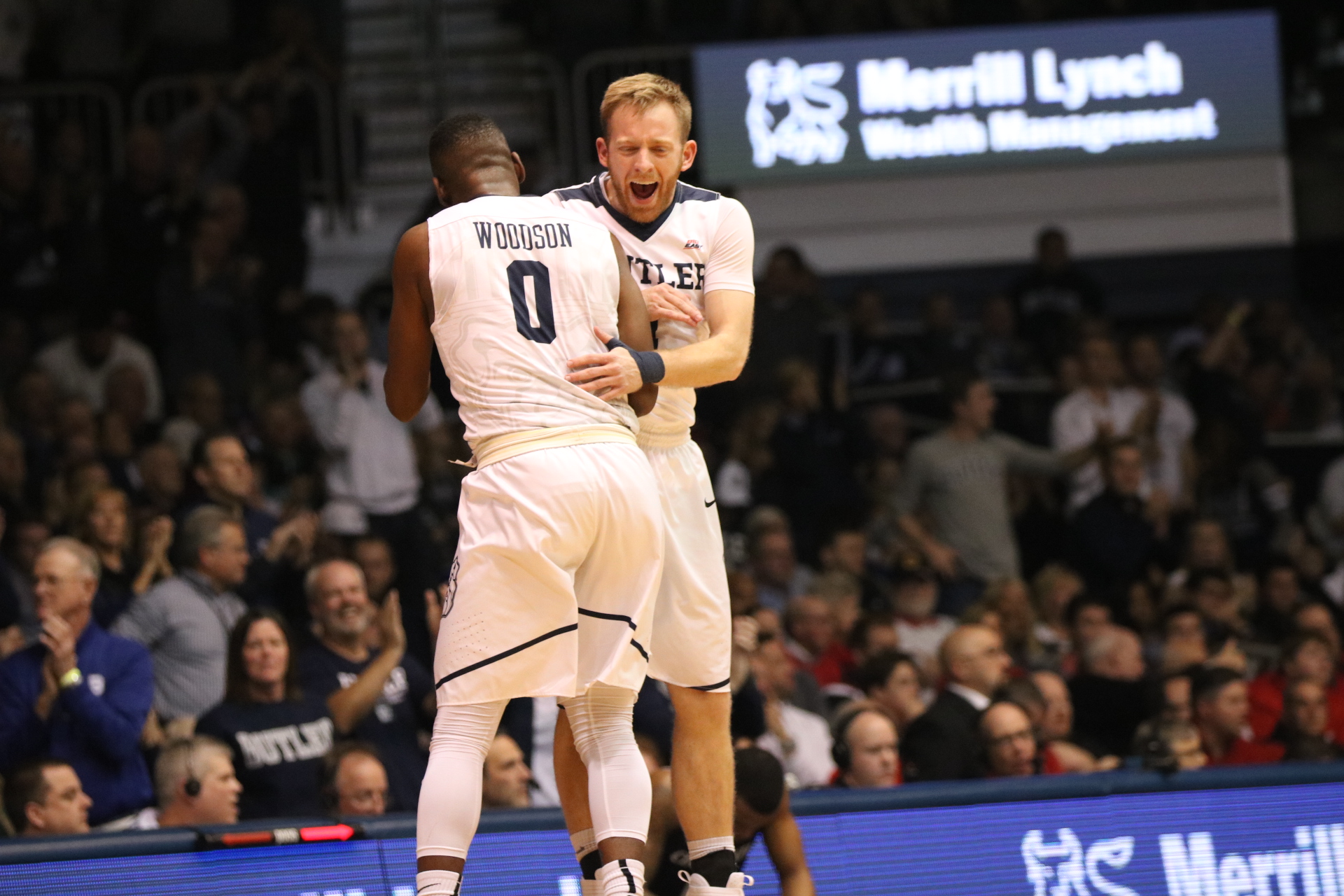 Avery Woodson and Tyler Lewis jump to celebrate during the game against Cincinnati. Photo by Jimmy Lafakis.

The No. 16 Butler University men’s basketball team pulled away from the No. 22 Cincinnati Bearcats down the stretch to win 75-65 in a sold out Hinkle Fieldhouse on Dec. 10.

Head coach Chris Holtmann changed his starting line up after their loss on Wednesday to the Indiana State Sycamores. Kamar Baldwin and Sean McDermott made their first career starts at Butler while Kelan Martin and Avery Woodson would come off the bench for the first time this year.

“That probably won’t be the last time that we mix up our line up,” Holtmann said. “People make more out of that than what it is, and I get it.”

Butler’s leading scorer, Martin, responded well to the shift as he led the team in scoring with 20 points on a 6-of-14 shooting performance.

“Just had to come out with a different approach than I did Wednesday,” Martin said. “Today I came off the bench with energy and fed off our guys.”

Bulldogs take down Cincinnati in a match-up of Top 25 teams. This is how they did it. pic.twitter.com/GhkSZ2d8Xd

Kyle Washington, Cincinnati’s leading scorer coming into the game, was held to just seven points on the night. Troy Caupain led all scorers with 22 points while Jacob Evans and Gary Clark each finished with 14.

Butler’s largest lead in a tight first half was six points while Cincinnati’s largest was four, but the teams entered halftime tied 35-35 after a deep Caupain three beat the buzzer. As a team, the Bulldogs were hot from behind the arc in the first half (7-of-12), including three three pointers from Martin.

Andrew Chrabascz led the team with five assists and added 12 points as well. Tyler Lewis and Nate Fowler connected for two points on a beautiful pick and roll play in the second half and both of them finished the game with nine points. Kamar Baldwin led the Bulldogs on the glass with seven rebounds.

Due to the line up shift, Butler had 33 points off the bench, but Cincinnati only had four from their non starters.

The Bulldogs have a full week of preparation ahead of them before they head to Bankers Life Fieldhouse on Dec. 17 to play the No. 9 Indiana Hoosiers in the Crossroads Classic.