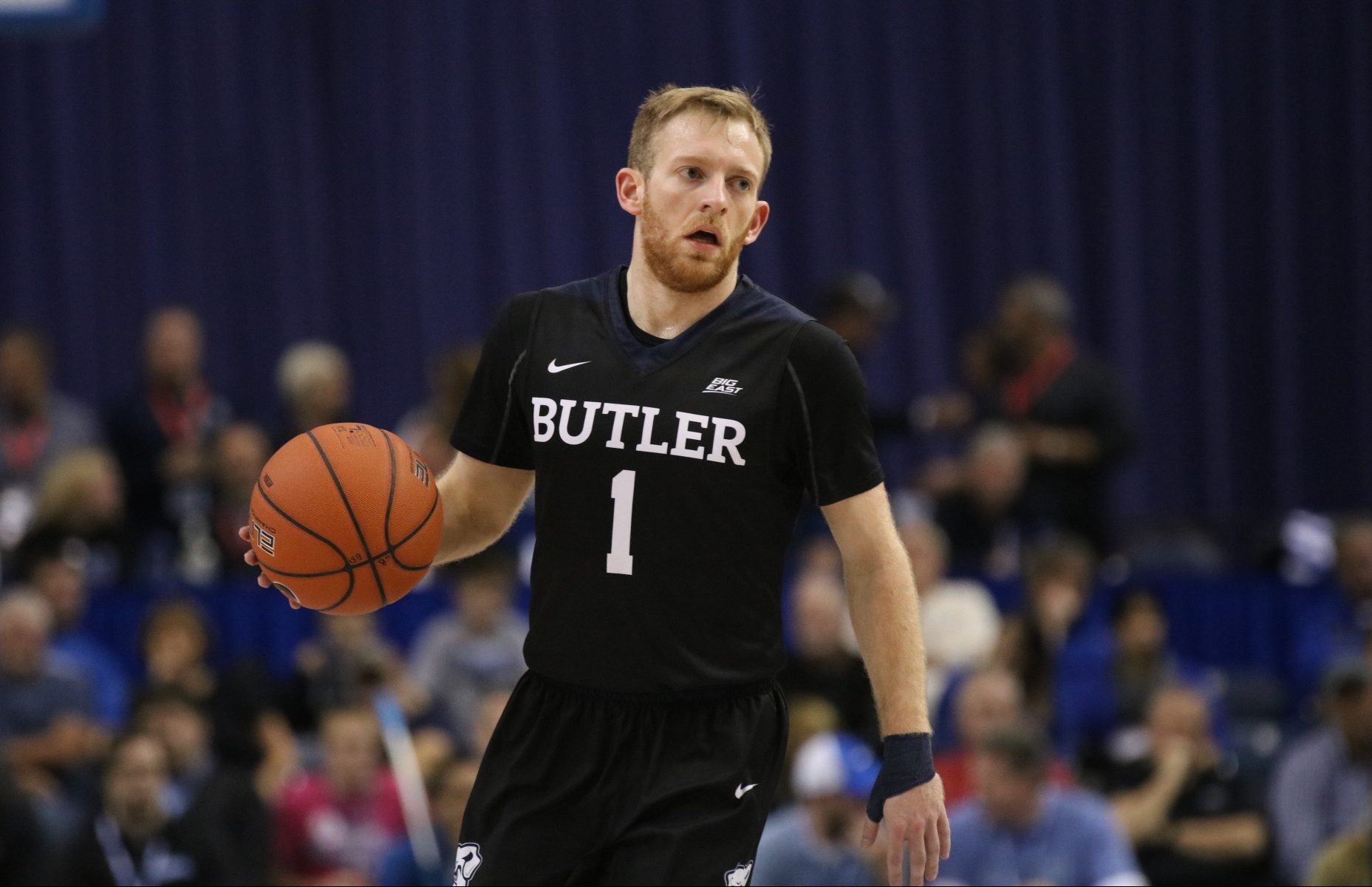 Tyler Lewis dribbles the ball against Indiana State in Terre Haute. He finished with 15 points and seven assists in Butler’s loss to the Sycamores.

The Butler University men’s basketball team suffered its first loss of the season after losing to the Indiana State Sycamores 72-71 on Dec. 7 in Terre Haute.

The Sycamores’s leading scorer, Brenton Scott, made the game winning free throw with 1.5 seconds left after he was fouled by Kelan Martin on a drive in the lane.

The Bulldogs (8-1, 0-0 Big East) had a legitimate chance to put the game out of reach with just under 13 minutes left to play as they led 48-42. The team was in the midst of a 16-2 run, which started after Indiana State (5-4, 0-0 MVC) led by eight points just minutes ago. However, the Sycamores refused to go away and Scott and Matt Van Scyoc delivered multiple times in clutch moments.

Scott led all scorers with 25 points while Van Scyoc scored 23 points. Van Scyoc was 6-of-9 from three point range. Five of his threes came in the second half, and he poured in nine points with under three minutes remaining as the Bulldogs defense failed to keep him from getting open looks from deep.

On Butler’s end, the duo of Andrew Chrabascz and Tyler Lewis kept the Bulldogs in contention down the stretch. Chrabascz was Butler’s leading scorer and rebounder with 18 points and seven rebounds. Lewis notched 15 points and led the team with seven assists. Chrabascz made multiple big shots late in the game, including two contested jump shots in the post and a three pointer. Lewis was highly involved in the Bulldogs 16-2 run in the second half as he assisted and scored on multiple plays.

Ohhh if you missed tonight's game against No. 15/16 Butler, you missed a good one! Catch all the highlights ⬇ pic.twitter.com/I4StGdS88a

Martin, Butler’s leading scorer, managed to end with 12 points, but he shot just 4-of-15 from the field and missed multiple open mid range jump shots throughout the night.

Historically, Butler has prided itself on being the more physical team, which includes out working their opponent on the glass. In the loss, Indiana State out rebounded Butler 37 to 29.

“We got beat tonight on the defensive end, but we didn’t have a good start or a physical start. We had lapses defensively, but it started with a lack of physicality. We expected this to be a dogfight tonight and it was,” head coach Chris Holtmann said on butlersports.com after the game.

The road ahead doesn’t get any easier for this currently ranked No. 16 Butler team. They will face the No. 22 Cincinnati Bearcats on Dec. 10 at 4:30 p.m. in a sold out Hinkle Fieldhouse. After that, the Bulldogs head to Bankers Life Fieldhouse on Dec. 17 to play the No. 9 Indiana Hoosiers in the Crossroads Classic.

“I think we have the most challenging segment of our non conference schedule here remaining in these last four games,” Holtmann said during a video posted before the Indiana State game on the Butler basketball twitter account. “We’ve got a full week ahead of us.”