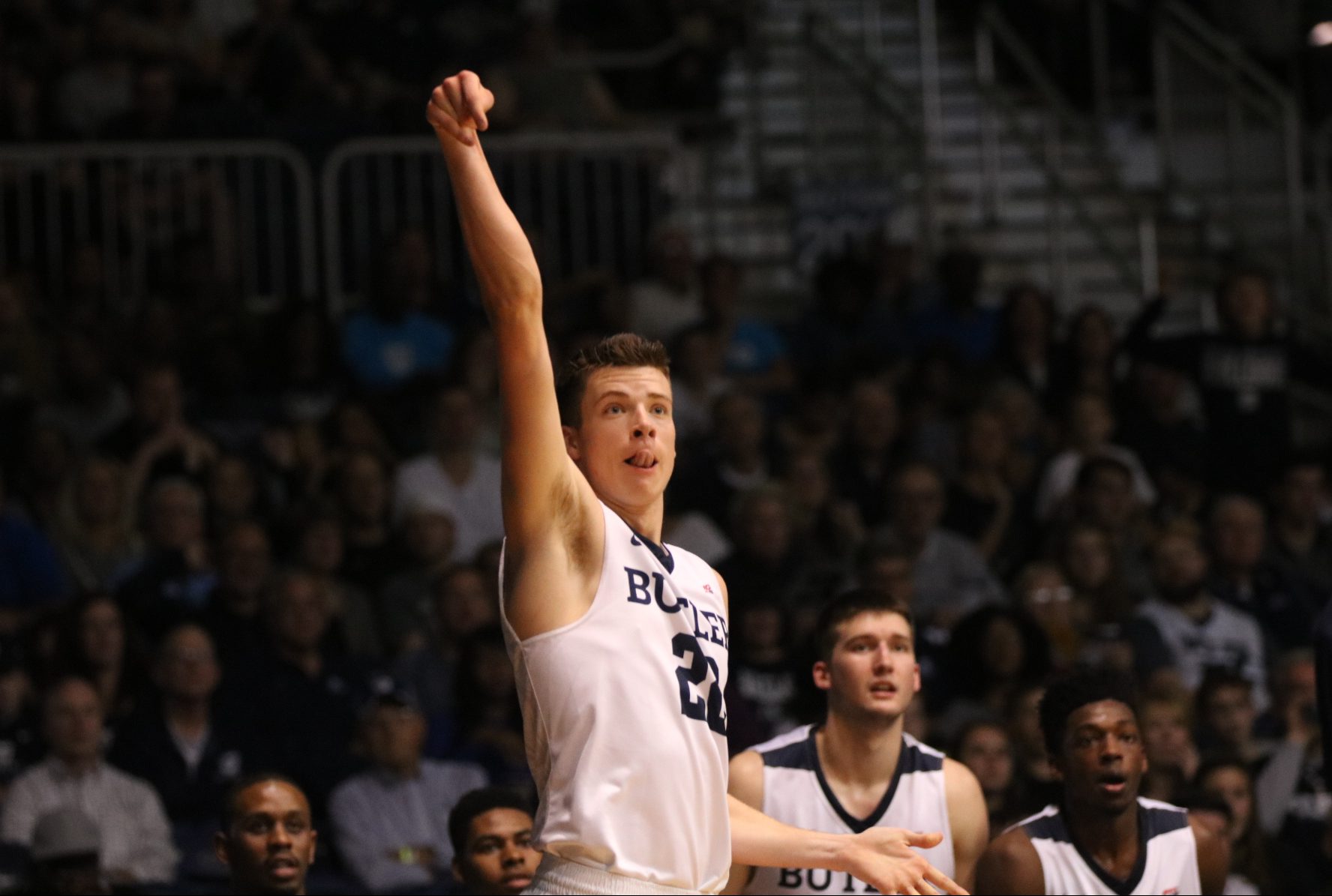 Sean McDermott follows through after releasing a shot. He was 3-4 from three point range. Photo by Jimmy Lafakis.

The Butler University men’s basketball team wrapped up their exhibition schedule with a 77-50 win over the Saginaw Valley State Cardinals on Nov. 5 in Hinkle Fieldhouse.

C.J. Turnage, the Cardinals leading scorer from last year, made a layup at the start of the second half to cut the Bulldogs lead to 34-29.

After that basket, forward Kelan Martin set the tone for how the rest of the half would unfold. He scored nine points in five minutes, including two dunks and a three pointer from the top of the arc. Martin led Butler in scoring with 15 points in the contest.

“I think I’ve been taking pretty good shots for our team and for me to be efficient, [and] that’s what I’m going to have to do every game,” Martin said.

Head coach Chris Holtmann said he warned Martin about the challenges he will face this season.

“I told [Martin] this is going to be his most difficult year, and I think he understands that because he’ll have added attention,” Holtmann said.

The Bulldogs also ramped up their defensive efforts in the second half as they held the Cardinals offense to 25 percent from the field as opposed to nearly 40 percent in the first half. Holtmann said he was pleased with his team’s defensive approach and believes that side of the ball will be crucial to Butler’s success this year.

Tyler Wideman grabbed a team high 12 rebounds, and four of those were offensive boards. This effort helped the Bulldogs dominate the Cardinals in the rebounding category by a tally of 40-25. He also had two blocks in the game.

Outside of Martin, four other Bulldogs reached double figures in the scoring column. Tyler Lewis, Sean McDermott and Avery Woodson each had 11 points while Andrew Chrabascz added 10 points.

McDermott scored nine of his 11 from three point range in the second half. After moving the ball down low, his teammates found him open on the right side of the floor outside of the arc multiple times.

“It felt good to see some go down,” McDermott, who went 0-3 from three point range in Butler’s first exhibition game, said. “I think my teammates put me in really good positions.”

Lewis, the team’s starting point guard, made an open three pointer as well and led the Bulldogs with three assists on the night.

“We’re not quite deep enough,” Holtmann said. “We’re going to need everybody to be available throughout the year.”

Another note is Kethan Savage did not play in the game because he is dealing with a case of pneumonia. Holtmann said the medical staff will reevaluate his situation on Monday, and he stressed practice is extremely important for the transfer guard.

The Bulldogs start their regular season schedule on Nov. 12 against the Northern Colorado Bears at 7:30 p.m. in Hinkle Fieldhouse.