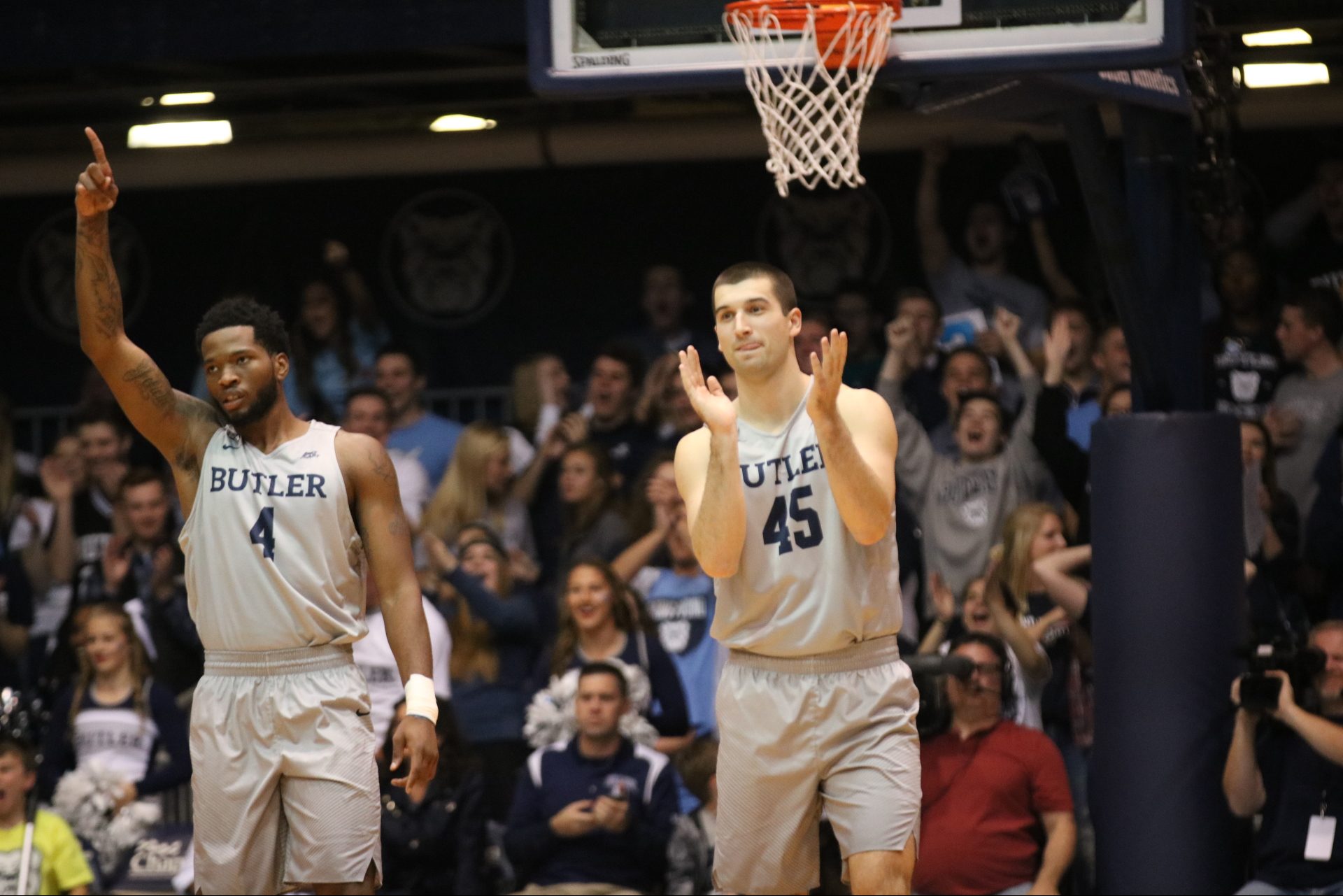 Andrew Chrabascz (pictured right) applauds as he gets set on defense. He scored 11 points against the Spartans. Collegian file photo.

The Butler University men’s basketball team rolled over the Norfolk State Spartans on Nov. 21 in Hinkle Fieldhouse by the score of 91-55.

The Spartans (2-3, 0-0 MEAC) featured a 2-3 zone for the majority of the game, and the Bulldogs (4-0, 0-0 Big East) countered with an effective mix of quick ball movement and accurate three point shooting. A 19-0 Butler run toward the end of the first half essentially put the game out of reach at halftime as the Bulldogs headed to the locker room with a 50-24 lead.

Avery Woodson erased all hope of a Norfolk State comeback in the second half when he made four three pointers in the first five minutes of the half. Woodson ended the game with 15 points on a 5-of-10 performance from behind the arc.

Avery Woodson comes out of the locker room for the second half HOT… https://t.co/L8Zf6EbVFE

Nate Fowler (6-of-7 from the field) scored a career high and team high 17 points and grabbed seven rebounds, including five on the offensive end.

Kelan Martin and Andrew Chrabascz each ended the night with 11 points. They both had a pair of three pointers as well. Freshman Joey Brunk poured in 10 points and pulled down four boards.

Tyler Lewis led the Bulldogs passing attack with eight assists, two of which were alley-oop passes to center Tyler Wideman.

Due to the large margin of victory, many bench players for the Bulldogs received a valuable amount of playing time in the early stages of this season. Butler finished with 46 points off the bench.

The Bulldogs also managed to hold Norfolk State’s leading scorer, Jonathan Wade, who was averaging just under 22 points per game coming into the contest, to only 13 points.

Butler will play the Vanderbilt Commodores on Nov. 24 at 8:00 p.m. in Las Vegas, Nev., to continue play in the Continental Tire Las Vegas Invitational.