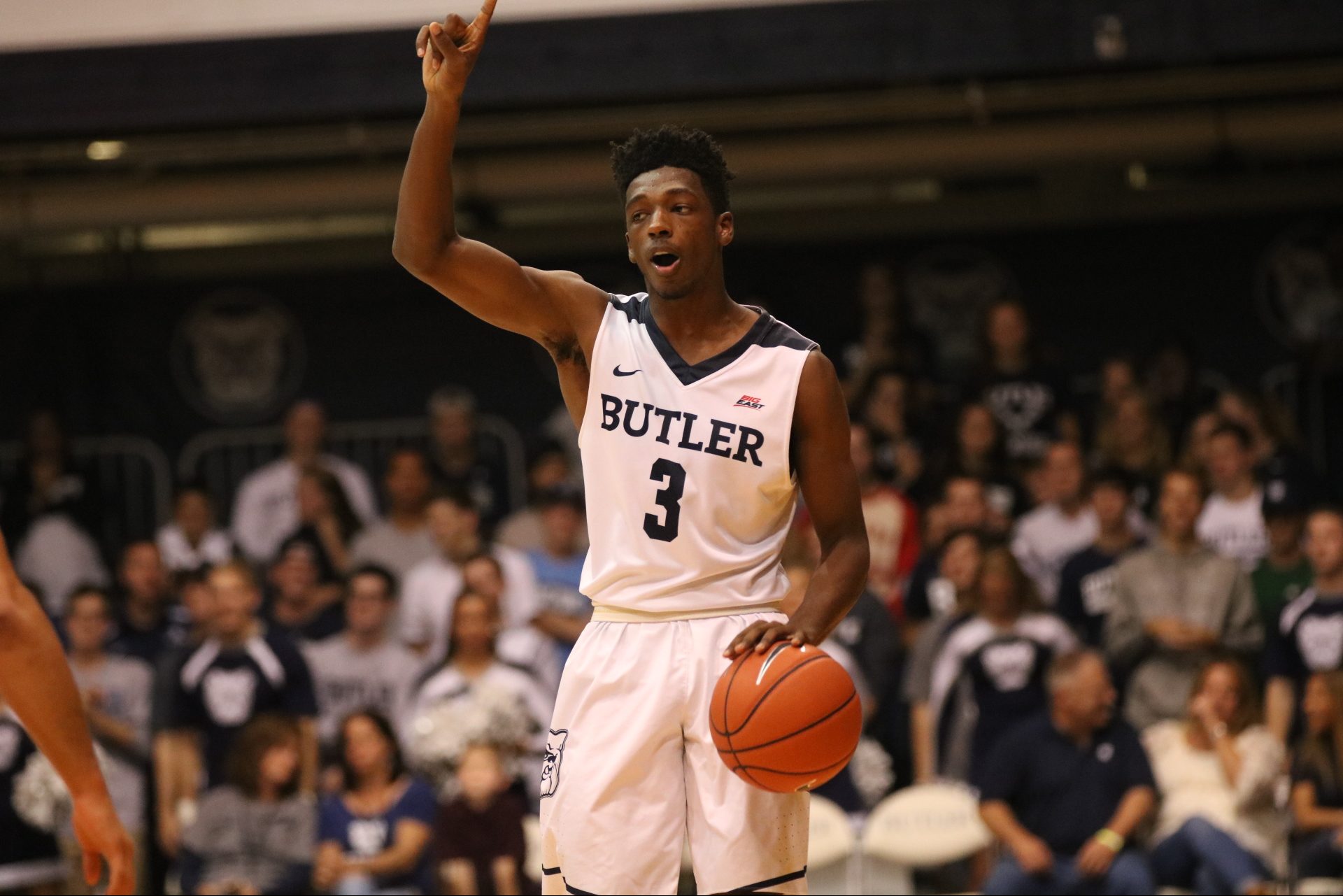 Kamar Baldwin calls out a play at Hinkle Fieldhouse. He scored 11 points against Arizona and had an important steal late in the game for the Bulldogs. Collegian file photo.

The Butler University men’s basketball team won the Continental Tire Las Vegas Invitational on Nov. 25 after beating the No. 8 Arizona Wildcats by a score of 69-65 in Orleans Arena.

Late game momentum is a hard thing to reverse, but that is exactly what the Bulldogs had to do in order to beat the Wildcats.

During those final two minutes, the Bulldogs went 8-of-10 from the free throw line. Their only field goals came on an Andrew Chrabascz layup and a Tyler Wideman dunk; both players were fouled on their shots as well. Wideman’s dunk and free throw gave Butler a three point lead with under 30 seconds to play. Kelan Martin drove to the top of the arc and wisely found Wideman open in the lane as opposed to shooting a contested jump shot.

Martin led the Bulldogs in scoring with 16 points despite shooting 1-of-6 from three point range and leading all players with six turnovers during the game. Chrabascz, Avery Woodson and Kamar Baldwin scored 14, 13 and 11 points respectively.

The majority of Woodson’s points came in the first half as he went 3-of-4 from behind the arc and helped Butler take a 36-34 lead into halftime.

Chrabascz was given the honor of being named the tournament’s most outstanding player; he finished the game with seven rebounds as well. Baldwin tallied two steals, one of which came late in the game after head coach Chris Holtmann decided to break out a 1-3-1 zone that proved to be a problem for the Wildcats.

Wideman’s only points came from his dunk and free throw, but he led the team with eight rebounds. Tyler Lewis led the Bulldogs in the assists category with six, and he also scored four points.

For Arizona, freshmen Lauri Markkanen and Kobi Simmons paced Arizona with 15 and 14 points respectively. Markkanen, Arizona’s leading scorer coming into the game, fouled out late in the second half after Chrabascz took a charge. Baldwin was able to force Markkanen to pick up two fouls after attacking him off the dribble when the forward tried to hedge the guard on ball screens.

Butler’s largest lead was at the nine minute mark in the second half when they pulled away from the Wildcats by nine points.

The Bulldogs have a quick turnaround as they will travel to Salt Lake City, Utah, to take on the Utah Utes on Nov. 28 at 9 p.m. After their latest win, Butler will likely be ranked in the AP Top 25 poll.

What happens in Vegas…becomes a carry-on for the trip to Salt Lake City. #GoDawgs pic.twitter.com/nNVNSW3Ctv