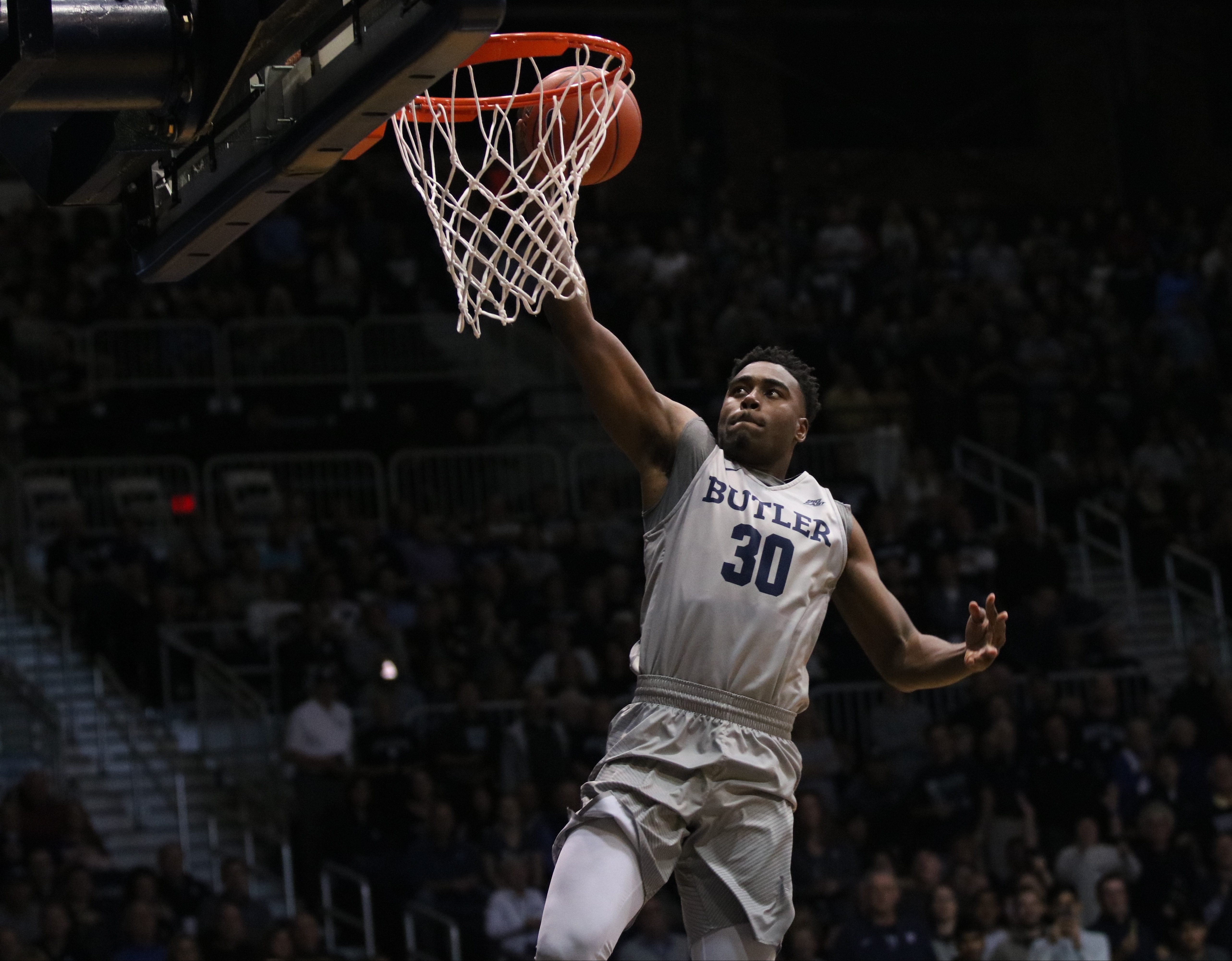 A strong end to the first half, which led to a dominant second half, propelled the Butler University men’s basketball team (1-0, 0-0 Big East) to a 89-52 victory over the Northern Colorado Bears (0-1, 0-0 Big Sky) on Nov. 12 in Hinkle Fieldhouse.

With 6:22 left to play in the first half, the Bulldogs led the Bears by three points. But just over three minutes passed, and the scoreboard read 40-27 Butler after a 10-0 run.

That stretch paled in comparison to the roughly 11 minute, 34-4 run the Bulldogs put together in the second half, which sent plenty of pleased Butler fans home early.

“We had a long talk in the locker room, talking about how can we have a more defensive approach,” Kelan Martin said in the post game press conference. “We came out in the second half with that energy, and it turned out well for us.”

Martin started his junior campaign with a 21 point and 6 rebound performance despite shooting poorly from behind the arc (1-of-7). Two of his 21 came in the form of a slam dunk off of the opening tip four seconds into the game.

Aside from Martin’s typical productivity, Tyler Lewis shot 7-of-7 from the field and finished with 16 points and a team high five assists. Both his mid range and three point jump shot looked smooth, and the ball came off his hands with a tight rotation.

“I put a lot of time into the gym,” Lewis said after being asked about his work during the offseason. “Just wanted to make sure I could hit open shots.”

The Bulldogs struggled to contain Northern Colorado’s Jordan Davis throughout the game until he exited with leg cramps early in the second half. Davis notched 25 points, he had 20 at the half, and shot a game high 13 free throws after driving into the teeth of Butler’s defense time and time again.

Head coach Chris Holtmann said he thought his team was too spread out defensively in the first half, particularly when switching on ball screens. Butler was also without Tyler Wideman for the majority of the first half after he picked up two early fouls.

“When you look at his numbers, he impacts our team defensively as much as anybody,” Holtmann said when asked about the impact of Wideman sitting out.

Other areas of intrigue from the contest were Kamar Baldwin scored all 11 of his points in the second half after shooting 0-of-3 from the field in the first half, Butler shot 31 percent (9-of-29) from 3 point range but shot 74 percent (23-of-31) from inside the arc and the Bulldogs out rebounded the Bears by 11.

The Bulldogs next contest will be on Nov. 16 against a Big Ten opponent, the Northwestern Wildcats, at 7:00 p.m. in Hinkle Fieldhouse, which is a Gavitt Tipoff Games matchup.

Highlights from tonight's 89-52 win over Northern Colorado to open the season… pic.twitter.com/IFKUtiWFvc