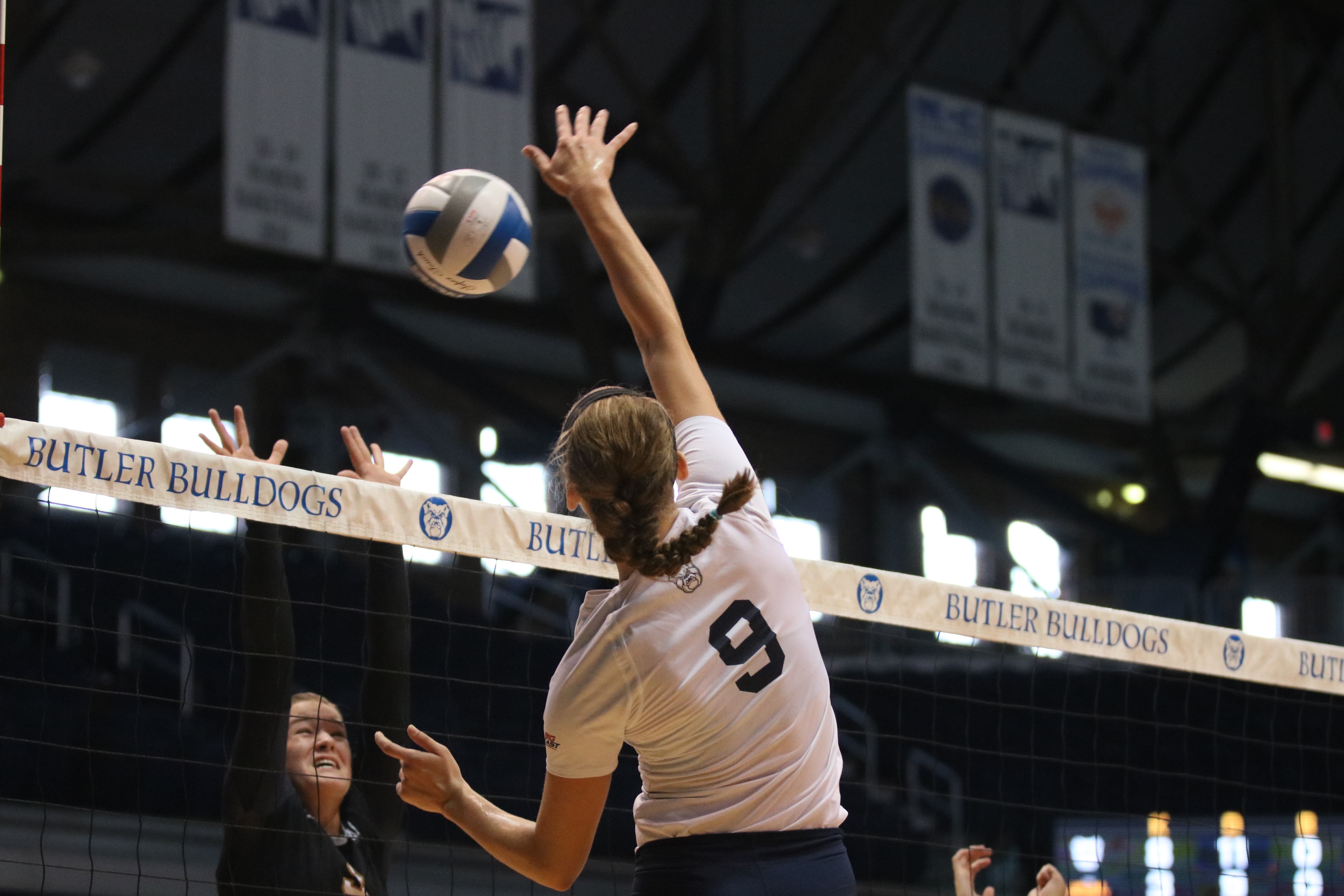 Anna Logan was in a rush. Her astronomy exam was at 1 p.m., and she did not want to be late. She tried to hustle out of Hinkle Fieldhouse at 12:30 p.m., but a gaggle of preteens mobbed her.

When the sophomore outside hitter isn’t surrounded by her adoring fans, she handles business on the volleyball court. As of this past Sunday, her 279 kills and 316 total points come in first and second in the NCAA, respectively.

As a Bishop Chatard graduate, Logan only lives five minutes from Butler’s campus. She has always called Indianapolis home, and she said she appreciates having her family and friends close to her. The 19-year-old said she never felt the need to get a driver’s license.

“Everything has always been so close,” Logan said. “I actually might have to get a license soon, though. My permit expires this December, so maybe I should.”

While she is the top scorer on the team, Logan always shrugs off her personal accolades and gives credit to the team, another thing that has always been so close.

“Our team chemistry is through the roof this year,” she said. “Our first contacts with the ball have always been great this year. When our team gets into that rhythm, it allows the second and third contacts to be just as good.”

She posted 366 kills in Butler’s 31 matches last year and was a Second Team All-Big East selection. Head Coach Sharon Clark said she was impressed with her captain’s first year campaign but did not anticipate her blazing start to this year.

“We knew that she would be even better this year because she got after it in the off-season,” she said. “But when you have exceptional athletes, they have a different personality that makes them rise above others.”

Butler has started off 11-5 and will kick off Big East action against Seton Hall University on Friday. Clark said she felt Logan’s team-first attitude helped guide the Bulldogs to early success.

“She is all about the team, whether that is on the court or off the court,” Clark said. “She is smart and she understands the bigger picture, which is hard to do when you are a young player. She recognizes that her success comes from her teammates.”

One of those teammates is junior setter Makayla Ferguson. Ferguson sets the table for Logan’s swings, and she said a mutual respect exists between them.

“We had already built a connection last year, but it is even stronger this year,” Ferguson said. “I know that even if the balls I place aren’t perfect, she is going to find a way to get to them. It gives me a lot of comfort and confidence out there.”

As the only player nominated to the Big East All-Preseason Team, Logan said she speaks up when she has to. She gives instructions to her teammates on the court but always rushes to comfort her allies after an error or missed opportunity. She said she always has the mindset of moving on to the next point.

“In volleyball, you have to have that next-play mentality,” Logan said. “If you think about it, then you are just going to make another error. That is why I encourage everyone to move forward.”

Logan rooms with sophomore Meredith Gallagher in Fairview House. Gallagher, who runs track, did not know Logan very well last year, but said the two have become fast friends because she respects her attitude and demeanor.

“Whenever I ask Anna how her games went, her response is always in terms of the team as a whole,” Gallagher said. “I was surprised to hear that she was leading the nation in kills because she never mentioned it. That speaks to the kind of person and player she is—she does her part for the team and focuses on winning as opposed to stats.”

She might be the last to admit it, but this is Anna Logan’s world. Right now, we are all just living in it.