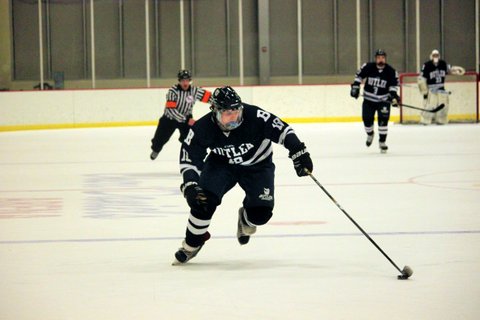 When the leaves fall and the weather starts to cool, the skates come off the shelf and the Butler club hockey team lets the Bulldogs out of their cage.

After the 2008 season, the club ran into financial issues that put them under a probationary standing with the university. However, last year was the team’s first year back on campus, making last season a rebuilding year for the Bulldogs.

“The freshmen this year are in a lot better shape than we were last year, and obviously coming off their senior seasons, they are bringing a lot of energy that we didn’t have this year,” senior forward Kyle Kortebein said.

Junior captain Noah Brayton is filled with high hopes and energy for the upcoming season.

“When you step on the ice and see your fellow peers and friends in the stands, there’s nothing like it,” he said. “Playing at home gives us a big advantage, and I believe all of our wins were at home last season.”

Brayton talked about the home crowd advantage, saying that having the big crowd behind the team really helps out with the team’s’ confidence. The crowd’s loud enthusiasm helps the club get in the zone and focus on the game.

With the first game of the season right around the corner, head coach Jeff Gasior is hopeful for the young team.

“This year we’re obviously setting our sights on trying to win a national championship and look forward to winning our division,” Gasior said. “We have the work ethic to do it. It’s just going to take a lot of hard work start to finish, so we should be a pretty tough team to beat this season.”

With tryouts, on-ice practices and off-ice workouts under their belts, Gasior, Brayton and Kortebein said this season will be one to remember.

Put down the lattes and pick up some hockey tickets. The team opens their season on Sept. 29 at Indiana University.