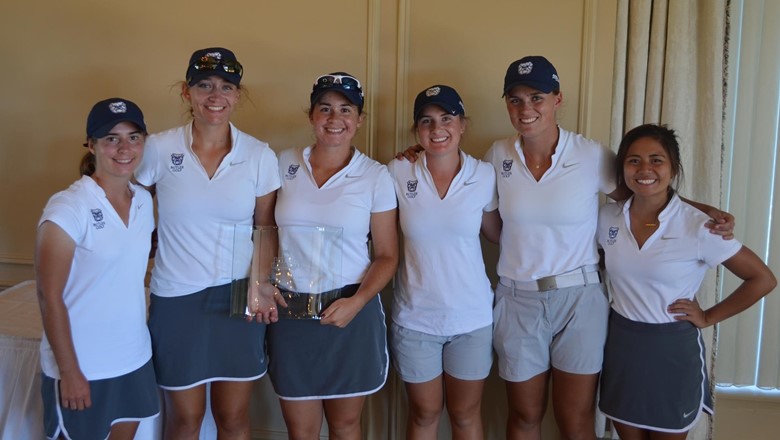 The women’s golf team poses for a photo after finishing first in the Loyola Fall Invitational on Tuesday. Photo from ButlerSports.com.

The Butler University men’s and women’s golf teams began the season looking to improve on their Big East placings from last season. They both start the year with several experienced players returning from last year.

“We are trying to improve everybody, if we can improve a couple of strokes on everyone’s average we should be competitive in both Big East Conferences,” Mattingly said. “We’ve got a lot of potential, we’ve got to get the averages down and improve on our short games and our course management.”

He said upperclassman leadership will be a crucial part of both teams’ success.

“Three juniors played in the conference last year, they are the leaders of the team,” Mattingly said. “Kelsey [McDougall], Abigail [Gleixner], and Rachel [Gathof] should provide good leadership to the younger ones. Joey Arcuri is the leader for the men’s team having played all four years.”

Christie Cates, a former member of the women’s team, joined Mattingly’s coaching staff while she completes her masters in accounting.

In addition to upperclassmen leadership, both teams have key pieces returning from the 2015-16 season.

“We are slow in our improvement in the Big East,” Mattingly said. “This year we look to jump several spots in the standings and we look forward to a good year.”

Mattingly is optimistic going into the 2016-17 season. Both teams look to take advantage of the returning experience and make a push in the Big East.

The men and women have several tournaments at home in Indiana this season. Both teams will compete in the Butler Fall Invitational.

The women’s team competed this past weekend in the Loyola Fall Invitational and brought home first place after a tiebreaker. Tibbets was the highest ranked player, finishing in fourth place.

The women’s team will compete in the Evansville Invitational, Indiana State Invitational and the Butler Spring Invitational. Other notable events include both the men and women travelling to Florida in early March for the Benbow Invitational followed by the Bulldog Florida Invitational.