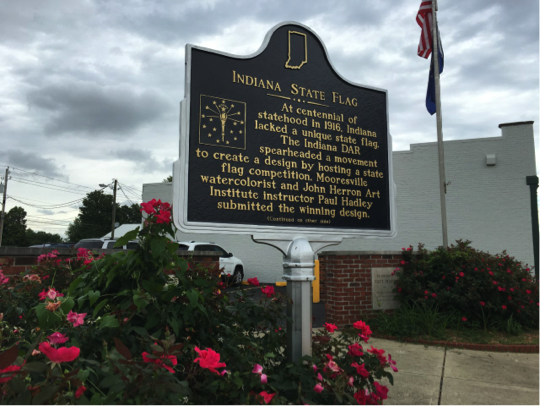 Mooresville is a small town southwest of Indianapolis and is known as the home of the state flag. This December, the flag is turning 100-years-old while the state of Indiana turns 200.

The bicentennial celebration is happening all year long with events throughout the state. Events such as 5K runs, book readings and festivals in many counties are all paying tribute to the bicentennial.

Susan Haynes, Morgan County Bicentennial board member, shared facts about the spending for the events. Most of the money spent for these celebrations was donated or given through sponsorship, showing the support that people from Indiana have for the bicentennial.

The most anticipated event of the celebration, however, is the torch run. Citizens of each county in Indiana were nominated to be torch runners and carry the torch through their own home towns. This torch run passes through all 92 counties, beginning in Indiana’s first capital, Corydon, and ending in Indianapolis on Oct. 15.

The torch is set to pass right through one special place with significance in Hoosier history.

“The torch will be coming through Mooresville High School the day of homecoming and the runners will even interrupt our homecoming festivities to pass the torch, so we are very excited,” Disney said.

The Mooresville High School football field was just updated to a turf painted with an outline of Indiana and the state flag in the middle. The 50-yard line says, “Home of the State Flag.” The football helmets also include stickers of the state flag.

Entrance to the Mooresville High School football field, identical to the turf on the 50-yard-line. Photo by Madi McGuire.

Mooresville native Andy Marine works at the high school as an English teacher and the director of the broadcast program. Marine said he is proud of where he comes from.

“Being a small town, we don’t get much recognition,” he said. “People know us for two things: being the home of the state flag and Gray’s cafeteria.”

The state flag was designed by a man who grew up in Mooresville named Paul Hadley.

Paul Hadley is the artist who made the design for the Indiana State Flag. He spent most of his time painting watercolor pictures.

The middle school in Mooresville is now named after Paul Hadley, and a historical marker was placed in the middle of the town and dedicated to Hadley’s accomplishments.

Many bicentennial events are open to the public and not far from Butler’s campus. Visit their website to learn about Hoosier history, upcoming events and more.