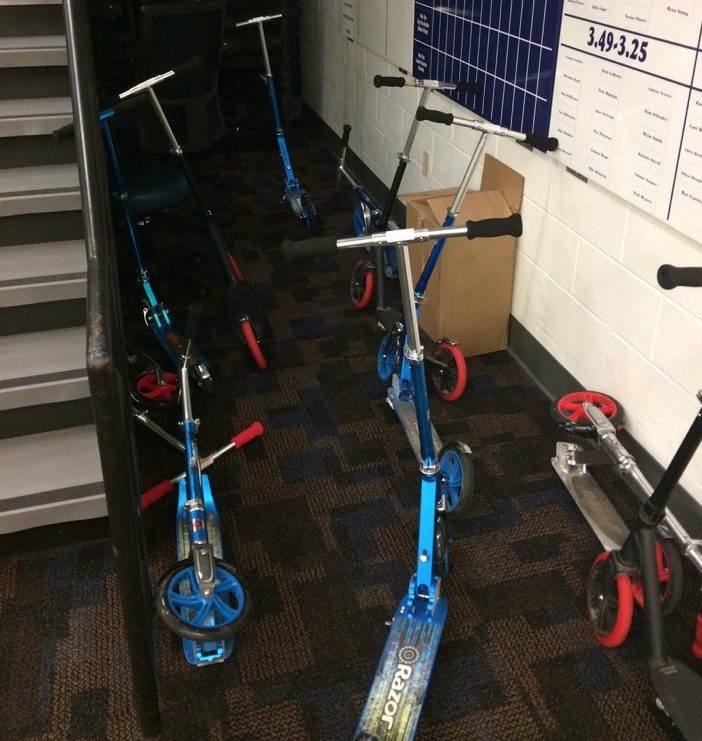 Butler students usually travel on foot, in cars or on bikes. But more than a few Bulldogs found an alternative method of transportation. Their vehicle of choice is an emerging trend in Butler’s athlete circles—a Razor scooter.

The scooters became in vogue on Butler’s campus a few years ago and recently rose in popularity.

The concept was the brainchild of recent Butler football graduates Marquese Martin-Hayes and Rico Watson. Martin-Hayes said he wanted scooters to be utilized and did not understand why nobody had one.

“It all started my junior year right after training camp,” he said. “I bought my own and started riding it, and we kept telling people that it was smart and rode them all around.”

The biggest boost in the scooters’ fame came after Martin-Hayes’ teammates saw him wheeling around campus.

“People started to really get them toward the end of the year,” he said. “Freshmen saw them on tours. The football players that were freshmen loved it, and now they are everywhere. It is kind of goofy, but still cool, you know?”

Sophomore outside linebacker Jack Disser purchased a scooter last year. Disser said he had to keep the tradition going for this year’s football season.

“You get around quickly on these things,” he said. “I could be laying in bed in the morning and get over to practice 10 minutes quicker. That’s an extra 10 minutes of sleep, and every minute counts when it’s 5 a.m.”

This year’s first-year football players wanted to follow in their teammates’ footsteps. First-year linebacker Austin Lewis said he is proud of his classmates for joining the movement.

“Riding scooters is more than a fashion statement,” he said. “It is a lifestyle that only a select few people can handle. I hate walking, so I love riding mine around campus and to Hinkle.”

“It is surprising that that it has caught on so quickly,” he said. “There seem to be about 18-20 scooters in here, so it has been an explosion.”

The phenomenon extends beyond Butler’s football team. A group of first years on the track team wanted a more convenient way to get across campus.

First-year triple jumper Dominic Keilty said buying a $32 scooter is one of the best decisions of his life.

“We didn’t even know the football players rode them around,” he said. “Six of us went to Target one night and bought them. I never thought anything like this would happen and I love it because the value was great.”

Most scooters around campus are red or blue. First-year James Route, who runs the 400-meter hurdles, said he takes pride in his rather unique scooter.

These Butler students wanted convenience, and the scooters gave them what they asked for. Watch where you are walking—a scooter might be zipping past you on the left.