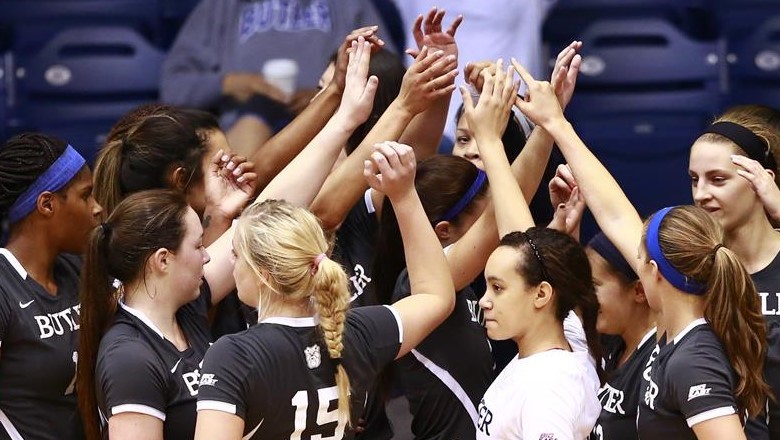 The team huddles together during a match. Photo courtesy of ButlerSports.com.

The Butler volleyball team snatched a five-set victory over the Eastern Illinois Panthers on August 30. Redshirt sophomore Whitney Beck paved the way to a “W” with her double-double, amassing 18 kills and 14 digs in the win.

This was a special match for Beck, who originally hails from Albion, Illinois. A crowd of 26 friends and family members came to Charleston, Illinois, to support her.

“It is always fun to play in front of family,” Beck said. “My old high school coach came to come watch. She has had breast and bone cancer since my senior year, and it was just really special that she got to watch me play.”

“Now that I am an upperclassman, I am really working hard on being that leader for the girls to look up to,” Ferguson said. “I want to work as hard as I can and never give up. I had a positive attitude and contributed all that I had in order for us to get the win.”

Logan said she was proud of her teammates for fighting through the grueling five-set match. Butler improved to 2-2 on the young season.

“When you play five sets, it is very exhausting,” she said. “It really was an all-around effort tonight. Our defense was struggling a little bit, and that’s when our front row came together and got some really good blocks. Our blocking is what won us the last two sets.”

Head coach Sharon Clark said she liked how the Bulldogs fought through service miscues and hostile territory in order to claim the win.

“We dug ourselves a big hole with our errors and had to fight to find a way to win,” she said. “The large and loud crowd was a factor, but we regained our focus when it seemed like the momentum wouldn’t swing our way.

Butler will travel to the Iowa Classic in Iowa City, Iowa. The Bulldogs will face the Oakland Golden Grizzlies and Arizona State Sun Devils on September 2. Their next tests will come against the host Hawkeyes and Western Illinois Fighting Leathernecks on September 3.