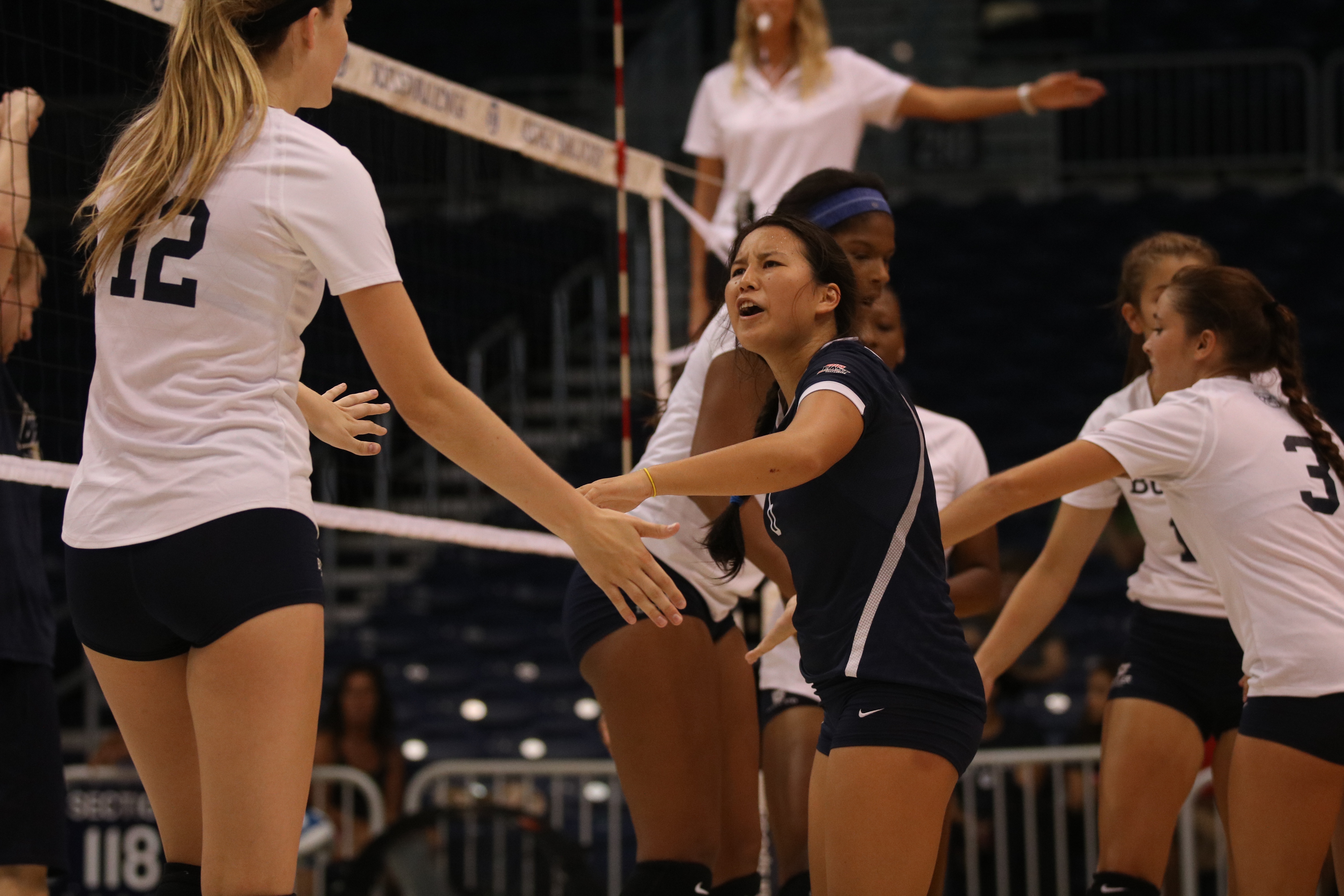 Taylor Takeda never thought she would be here. Four months ago, her current situation was unfathomable. But as she sprints around the court at Hinkle Fieldhouse, she realizes she was meant to be in this position.

Takeda is a sophomore libero on Butler’s volleyball team. She hails from Mililani, Hawaii, and attended Division-II Dowling College in Oakdale, New York last year. Dowling closed in June after failed efforts to grow enrollment and inability to find a partner to stabilize the debt-ridden institution. The Long Island liberal arts school had been in session for 48 years.

“It was really tough to hear that my school was closing,” Takeda said. “When I was back in Hawaii this summer, my dad kept asking me if I was OK and I kept telling him no. He kept saying, ‘You’ll be fine,’ and I kept saying, ‘No, I won’t be.’”

After Dowling closed down, Takeda became a hot commodity on the transfer market. She received interest from multiple schools, including Butler and St. John’s. She said she chose Butler because she felt confidence in head coach Sharon Clark after just one phone conversation.

“When the news got out, there were a lot of schools that wanted her because they knew what she could bring,” Clark said. “I knew she could play a major role, took that chance and got her. In my eyes, she has earned that starting libero position.”

Takeda, who was added to Butler’s roster in late June, was named East Region Freshman of the Year by the American Coaches Volleyball Association and First Team All-Region at Dowling.

“I had a lot of fun last season because I was able to jell with my teammates,” she said. “It was tough to separate from them. The whole week before coming to Butler, I was freaking out. With the Big East and Division I, I was asking myself, ‘Oh my God, can I really do this?’”

Clark said she believes that Takeda is a great fit for the libero position and spoke glowingly about her on-court attributes and intangibles.

“She just has a knack for the game and a feel for the ball,” Clark said. “At times, you have players that develop that, but she is coming with that in full force. She is going to dazzle people because her volleyball IQ is through the roof.”

Takeda never traveled to Indiana before arriving on campus. When she speaks about how her teammates welcomed her, she mentions how her soul was touched.

“Everyone was so friendly from the start,” she said. “Before I got here, I was really nervous and didn’t know what to expect. When I arrived at the airport, I was greeted by Makayla [Ferguson] and Kayla [Bivins], and they were holding a sign that said ‘Welcome to Indy, Taylor.’ I still have it.”

One teammate’s hospitality stood out to Takeda. Sophomore Anna Logan, who lives a mile from Butler, hosted Takeda at her house over the summer. Logan jumped at the opportunity to assist her new teammate.

“We had a whole lot of fun this summer,” Logan said. “Her family sent us Hawaiian dried mangoes in care packages. We took her with us to our family reunion near Buffalo this summer and she loved Niagara Falls.”

Logan immediately took note of Takeda’s kindness and generosity. Her thoughtfulness extends beyond mangoes in care packages. It is a part of the fabric of her being.

“One thing I have noticed is that she holds the door open for every single person,” Logan said. “She does that until the last person is out of Hinkle, no matter what. She is just like that.”

Takeda says she has found another home far away from the islands. She never imagined ending up in Indianapolis, but her enthusiasm for Butler glows throughout her words.

“Everyone is so accepting and kind here,” she said. “I feel like my old school was meant to close so that I could be here and push myself in academics and athletics. It just feels right.”