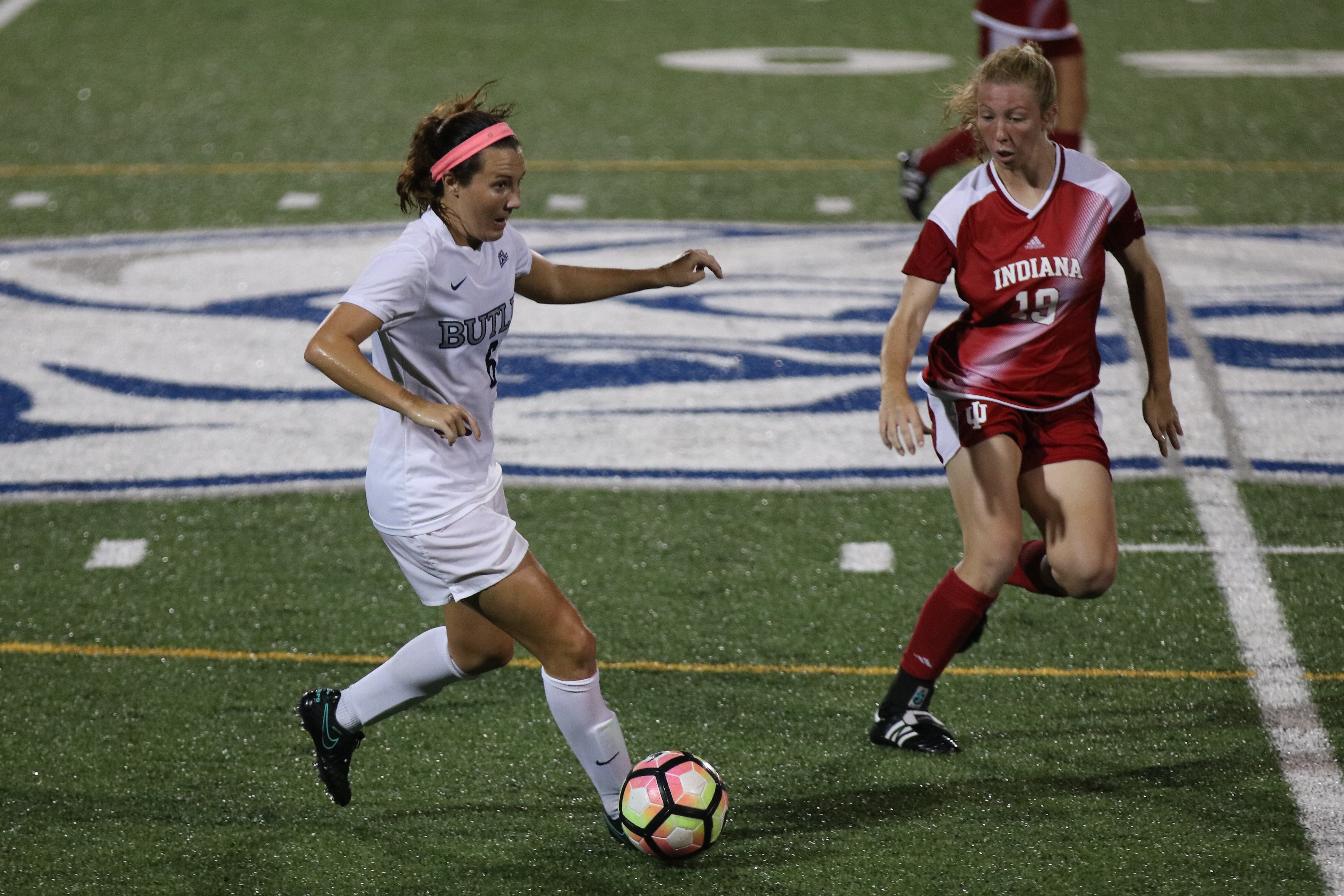 The Butler University women’s soccer team found themselves on the wrong side of luck, losing their first game of the season to Indiana University 1-0, putting them at 1-1-2 on the season.

“The last 45 minutes was the best soccer we’ve played all season,” Butler Co-Head Coach Tari St. John said. “It was really quite good. You want the results to validate when you play really well, but sometimes in soccer that doesn’t happen.”

Final Score from the Butler Bowl. The Bulldogs will return to action Sunday when they host the Akron Zips pic.twitter.com/sf1PAG8d71

Senior midfielder Serina Kashimoto was proud of her team’s effort.

“We made a lot of chances, we just couldn’t hit on target,” she said.

The game was delayed just over an hour due to lightning and rain. Storms were so strong that water flooded the sidelines of the field, almost reaching the numbers painted for football. Thanks to new turf and drainage system at the Butler Bowl, the water quickly diminished once the storms stopped.

Butler started an uneventful first period with the possession. Both teams started the game with a slow pace, and neither team scored.

The most eventful time of the first half was in minute 18 when Abby Allen of Indiana received a yellow card.

Butler ended the first half with three shots, two saves and six fouls. Indiana ended the half almost even, bettering the Bulldogs in shots with five, as well as recording one save and four fouls.

When the second period rolled around, Butler picked up the pace and outplayed the Hoosiers. They constantly teamed up on Indiana and kept the shots flowing.

Also during the second half, another Hoosier earned a yellow card. Justine Lynn made a hard collision with Kashimoto at midfield, causing Kashimoto to take her time getting up.

The Hoosiers found a little bit of luck in minute 77 when Caroline Dreher made a shot from 25 yards out. The shot was deflected and found its way past Butler’s sophomore goalkeeper Hannah Luedtke to take the 1-0 lead.

St. John was disappointed that the Hoosiers’ goal came in the way that it did.

“It’s just unfortunate that IU was able to get a somewhat fluky goal, I would say,” St. John said. “It was nothing that was really earned.”

“There’s no excuse [for losing],” Kashimoto said. “Everything was the same for IU. Obviously, IU is pretty strong … but we could do better somehow.”

While the final score says the Bulldogs lost the game, it wasn’t necessarily a lost cause.

“I think there is a big realization for our team that we did make a major stride forward today,” St. John said. “I think it’s important that we’re not hung up on the actual result of the game and it being a loss and thinking that we didn’t play well.”

Butler Co-Head Coach Rob Alman thought tonight’s game was a move in the right direction for the rest of the season.

“That performance was a really, really good performance in terms of game control, game management and absolute domination of possession,” he said. “We created more chances than they did, and we played very well.”

The Bulldogs are in action again on Sunday as they host Akron at 1 p.m.