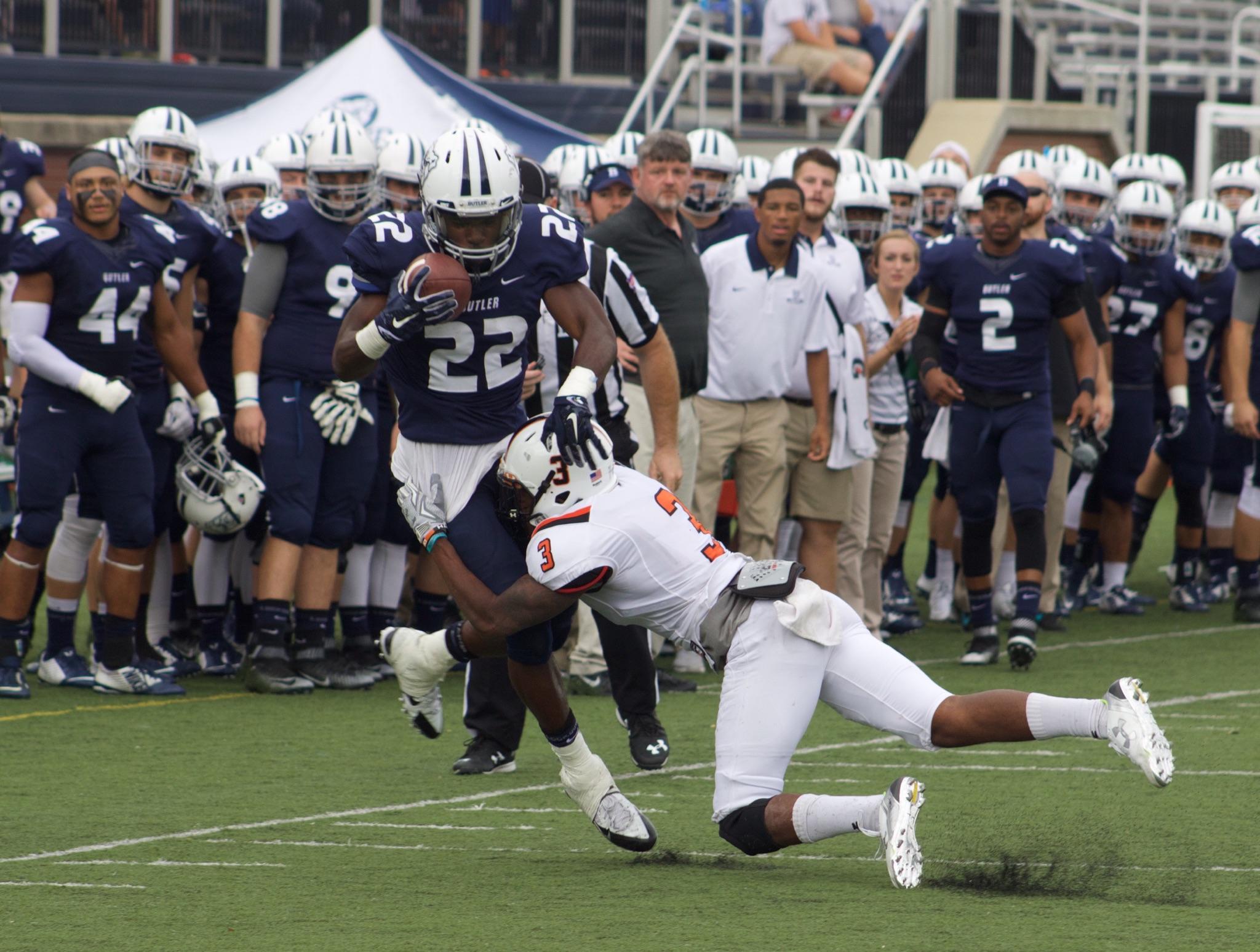 Marquese Martin-Hayes catches a pass during the 2015 homecoming game against Campbell University on September 26. Photo by Jimmy Lafakis.

Underneath a rugged exterior lie both a cerebral mind and a heart of gold. Senior Marquese Martin-Hayes made football magic at the Butler Bowl for four years, but he feels it is time to move forward.

This past season, the Chicago native played in all 11 games and finished his career as an All-Pioneer Football League Second Team wide receiver. He also earned an Honorable Mention as an All-PFL return specialist, secured 47 receptions and led the Bulldogs with more than 1,000 all-purpose yards.

For Martin-Hayes, these mere statistics will go down in a book.

“Playing for the Bulldogs was fun,” he said. “But like I said in a Twitter post after the end of the season, it was never really about the things people think you will miss. It wasn’t really the fans, touchdowns or dope pictures, it was more about the fact that I was losing a family.”

On April 4, he announced on Facebook he had accepted a job in Indianapolis at TEKsystems, a provider of IT staffing, talent management and services. He will help clients find jobs in IT for six months and will then move into a sales position. The economics and finance double major said he felt happiest in a new realm.

“I was deciding on this job for about three weeks,” he said. “It stood the test of other offers, and when I spent time in the office, I truly enjoyed the people I was around and the line of work that they were doing.”

Redshirt junior Jordan Ransone is one of Martin-Hayes’ closest friends. The defensive lineman feels both sorrow and happiness about his roommate’s departure.

“I am excited for what he will do in the future,” he said. “I am going to miss living with him and the small things like chilling on the couch and playing video games. Now that he is about to graduate and enter the next stage of his life, it’s going to be tough not seeing him as much.

Martin-Hayes and redshirt junior Malcolm Weaver formed a connection at Loyola Academy, a prep school in Wilmette, Illinois. The duo is more than just a quarterback-to-wide receiver tandem: they are best friends on and off the gridiron.

“We have been through the good and bad of a friendship,” he said. “We are always there for each other in the end, and I think that will last forever. He has a bright future, and he will definitely be someone that is at my wedding party.”

Before joining TEKsystems, Martin-Hayes attended an NFL Regional Scouting Combine in New Orleans on March 12. He also flirted with the idea of joining the Canadian Football League, but ultimately decided it was time to hang up the cleats.

Head coach Jeff Voris said he feels his former player’s intangibles will serve him well in the next chapter.

“He truly cared about his teammates and how he could help the team,” he said. “He was always around Hinkle. He has an unbelievable will and competitive spirit, but most of all, he is a tremendous representative of Butler and was a great leader within our program.”

Each year, the Butler football team chooses seniors to mentor freshmen. Pace Temple, a freshman wide receiver, was under the tutelage of Martin-Hayes last season.

“I came in like the rest of the guys, really nervous and questioning myself,” Temple said. “He can be a great vocal leader, but what I think is more important was how he led by actions. He didn’t just tell me what to do. He showed me how to work and how to get things done.”

Even though Martin-Hayes is leaving Butler in May, Temple aims to continue the friendship.

“Marquese is the type of guy you want in your life,” he said. “He is a positive, uplifting guy that truly cares about you, your family and your overall happiness. I am blessed to have had him in my life as a mentor, teammate, friend and eventually family.”

Martin-Hayes will walk across the stage with comfort. His past is behind him, his immediate future in place. His old soul knows that more is on the horizon.

“I loved Butler football,” he said. “I was fortunate enough to accomplish my dreams in that realm of life, but I wanted to accomplish my career dreams. I know the power of my actions, and I fully plan on using that knowledge to make me successful.”