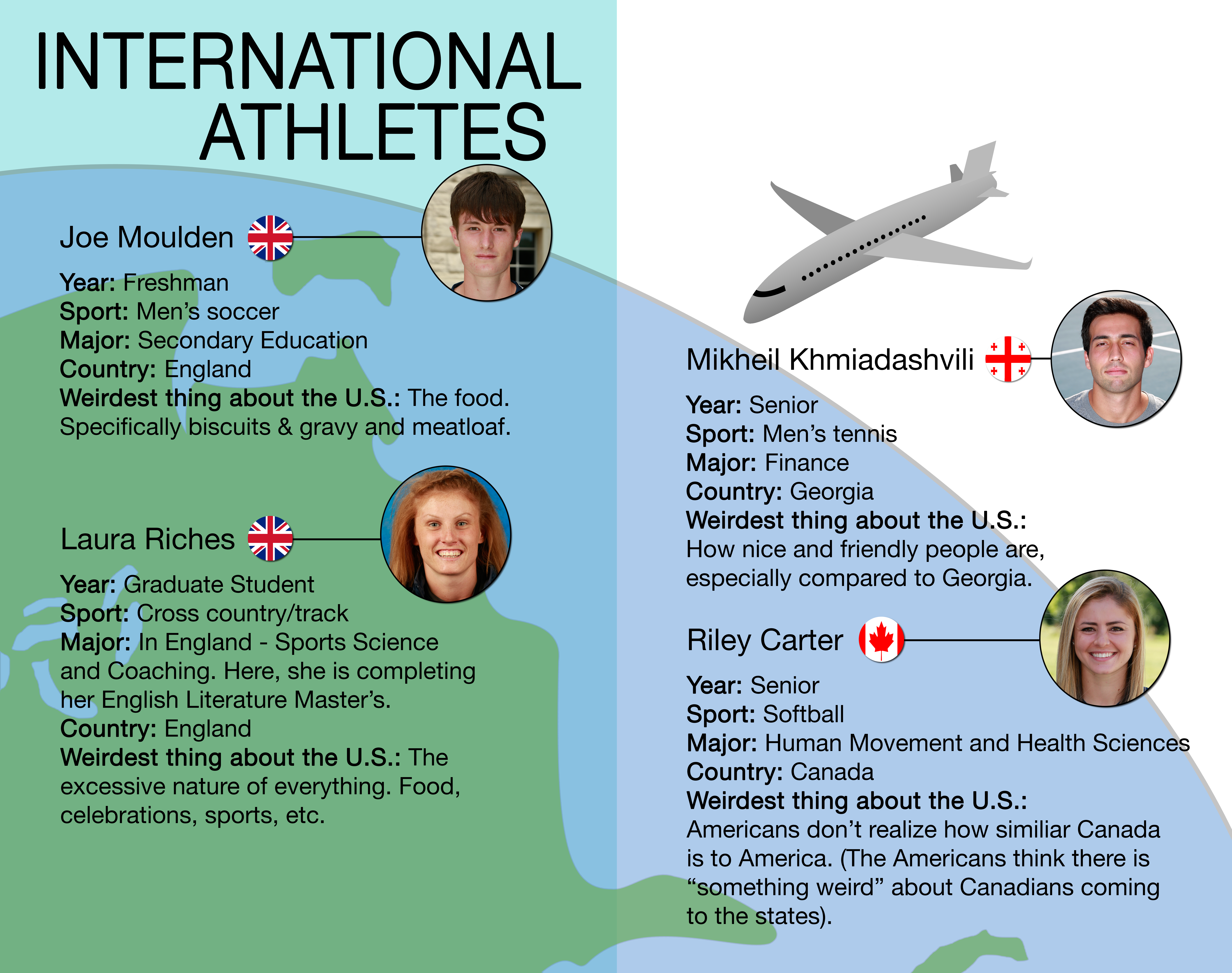 When you grab a program at a Butler sporting event, do not be surprised if you see names of student-athletes from around the globe. Over the last few years, Butler acquired international praise. Bulldogs from across the world have made an immediate impact on their respective teams.

Freshman Joe Moulden hails from Bolton, England. Moulden honed his soccer skills across the pond by playing for Manchester United’s youth system as an Under 16.

He then left and signed an apprenticeship contract at Blackpool FC for two years, which enabled him to play full-time. After some initial struggles of returning from a two-year education hiatus, he said he feels like Indianapolis is his new home.

“At first, people did not understand me when I talked,” Moulden said. “It was hard to drive on the other side of the road, and it was really tough to leave my family.”

After a year of competition in a top conference, he said he believes he found his niche.

“Butler has helped me improve my ability as a soccer player, as well as addressing my weaknesses as an athlete,” Moulden said. “Off the field, it has helped me to become a more organized individual because my time management skills have improved a lot.”

Butler provides a welcoming environment for a student-athlete in the middle of his college experience.

Junior Mikheil Khmiadashvili came to Butler from Tbilisi, Georgia. The country of Georgia does not have high school tennis, so he hired a coach when he was 13 years old.

As a transfer student, he experienced some culture shock, but he said he found his place on the men’s tennis team.

“I found out about Butler through the respected business school,” Khmiadashvili said. “People talk and behave much differently here, but Butler is small enough so one can have both a good education and an amazing athletic experience.”

He moved to the United States only a year ago, but Khmiadashvili said the Butler culture already impacted him.

“I have now learned how to be a better teammate and a better student,” he said.

Another Bulldog will look back with fond memories as she nears the end of her time at Butler.

Carter, who played softball, volleyball and baseball at Bill Crothers Secondary School, found softball to be her true calling.

She sent a video of her playing softball to schools before she was one of 25 players nationally selected to attend the final Junior National Team Evaluation Camp. Butler was one of the schools who responded to her, and when she arrived in Indianapolis, she immediately felt at home on the diamond.

“It helped that when I got here, I had an immediate group of friends on the softball team,” she said. “Stepping on the field has been awesome because I have a few teammates that I would consider family, which has been tremendous for me because my family is not here.”

Carter, a human movement and health sciences major, thinks Butler prepared her well for her endeavors beyond softball.

“Being here has been incredible,” she said. “I know that when I get out of here, the education I am leaving with will provide me with unlimited opportunities. I have learned a lot through my program because I have been lucky enough to have awesome professors who have been extremely helpful on my journey here.”

A student-athlete who walked across the stage found a second home at Butler.

Laura Riches does double duty for the Bulldogs through running cross country and track. The English Literature graduate student felt an urge to become a Bulldog when the chance presented itself.

“The past few years, Butler has had success on the track,” she said. “After the women’s cross country team won bronze at Nationals, it put them on many people’s radars. Many others, including some Brits, had success here, so when Coach [Matt] Roe contacted me, it seemed like a great opportunity.”

Staying at Butler for two years helped her adjust to her new lifestyle. She said she misses the landscape of her native England, but she has found her stride.

“I guess I miss hills from time to time, but who really likes running up hills?” she said. “The class sizes are a little different and the humidity levels destroy me, but it’s all stuff that you get used to. I have learned to listen to orders, and I now value the support I have here from coaches who know so much.”

Riches said she knows going to school across the world was the right decision. There is no convincing her otherwise.

“If nothing else, I learned that the Midwest is the place to be,” she said. “Butler students rock.”

They miss their families, they have adjusted to new environments and their personal worlds may have changed drastically. One trait unites these international Bulldogs: their ability to fight.