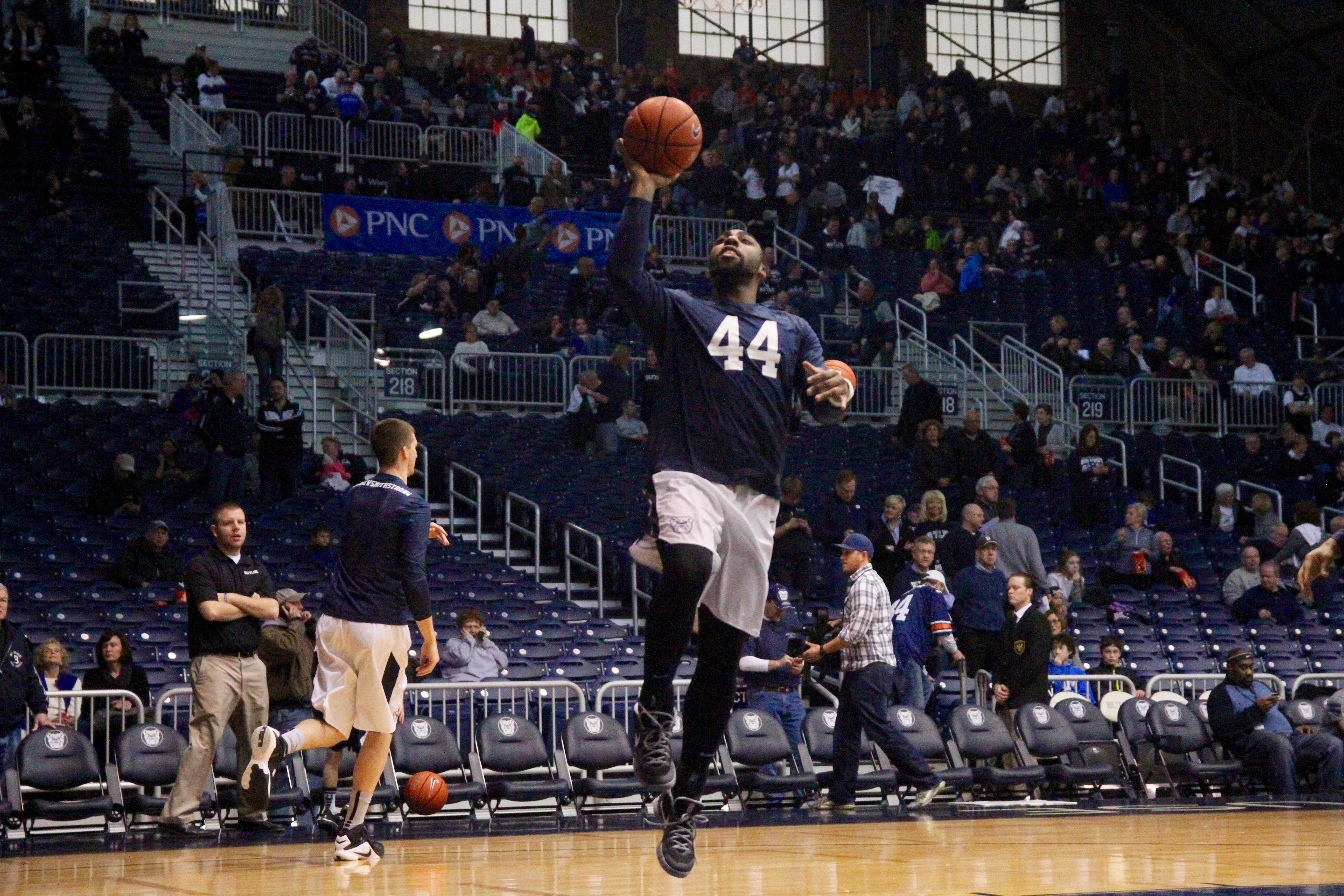 Smith, 25, died on Jan. 12 after a two-year battle with cancer. He was diagnosed with an aggressive form of non-Hodgkin’s Lymphoma in 2014, which turned into Leukemia in November after his body rejected a bone marrow transplant.

The entire game was dedicated to Smith and his legacy.

After winning the tip, sophomore forward Tyler Wideman scored the first points of the game. St. John’s and Butler battled through most of the first half.

Students in the Dawg Pound wear Stay Positive shirts for the game. -Photo by Nora Navin

A 10-0 run put the Dawgs squarely in the lead, which was in double digits through the entire second half.

Dunham led the way for the Bulldogs, scoring 24 points and five rebounds. Sophomore forward Kelan Martin was close behind with 22 points and 10 rebounds.

“[The win] meant a lot for our team,” Martin said. “We wanted to win for [Andrew] and his family. He was a tough guy and we just wanted to come out and play tough for him.”

To go along with the game’s Stay Positive theme, Butler passed out t-shirts to students in the Dawg Pound in honor of Smith, who was nicknamed “Moose.” The shirts featured a bulldog with moose antlers on the front, and the mention of the third annual Stay Positive day accompanied with #AndrewSmithStrong on the back.

During the first media timeout, Eric Day, the creator of the Stay Positive organization, spoke to the sold out crowd at Hinkle. He spoke of his own personal battle, how he met Smith and how Smith inspired him.

Day told the crowd how he struggled to get into Butler three times and then was diagnosed with a brain tumor. While receiving treatment, Day was given a ball signed by all the members of the Butler men’s basketball team by a family member who knew of his passion for Butler basketball.

“If you look closely,” Day told the crowd, “Andrew Smith autographed that ball.”

During halftime, Smith’s wife Samantha spoke to the crowd as she fought back her emotions.

“Andrew and I had this game on our calendar to come say ‘thank you’ to you guys,” Samantha said. “I’m here because it meant so much to him.”

Also during halftime, the video board showed highlights of the 2011 game in which Butler defeated Purdue University 67-65 in the Crossroads Classic thanks to a last-second tip-in by Smith.

“Obviously [Andrew] has been spoken so well of by so many people,” Holtmann said. “At the end of the game, we just thought that this would be a good time to give Andrew’s family the game ball.”

After the game, Curt met with the team at center court to talk and give his thanks.

“We just had a minute to talk about Andrew and what he has meant to our guys that knew him, and our guys that didn’t know him in our program as a whole and the warrior he was,” Holtmann said. “[Curt] just said, ‘Thank you for what you’ve done.’”

Some athletes currently in Smith’s previous position took time to give their thoughts on him.

“He was a warrior, like coach always says,” Martin said, who never played with Smith. “I’ve just heard stories about him, and we wanted to win for him and his family.”

“He was never about himself,” Dunham added, who played one season with Smith. “He always put team first.”

Smith’s legacy of caring for other can be seen through his teammates, his family and his wife.

As she addressed the crowd, Samantha said, “The thing Andrew was so worried about was who was going to take care of me.

“You guys have answered that.”