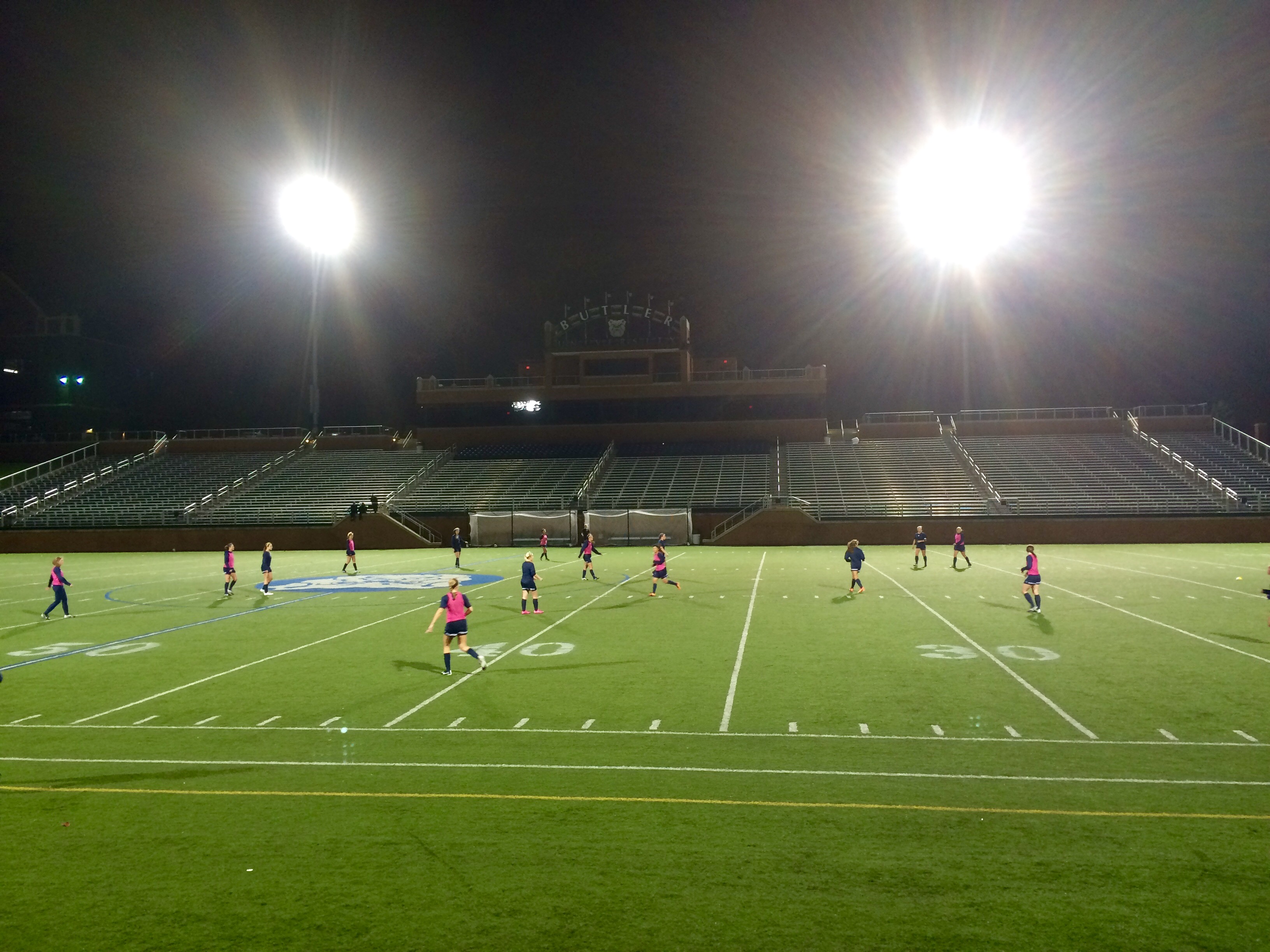 This season for the Butler University women’s soccer team has been nothing short of historic. The history-making will continue Saturday, as they play the program’s debut game in the NCAA Tournament against Ohio State University.

Multiple records have been broken this season. With 16 wins, this has been the winningest season in Butler women’s soccer history. This year’s senior class has also become the most successful group on record – not only by wins, but winning percentage, too.

Also, the team has won a record nine shutouts this season. Sophomore goalkeeper Madison Card was the winning goalie for eight of those games.

From the beginning of the season, there has been a special feeling inside of the locker room. Co-Head Coach Tari St. John couldn’t have truly predicted this monumental season for the Bulldogs back in August, but she knew there was potential.

“Back when we started recruiting Sophie (Maccagnone) as a sophomore, we kept saying his senior class, when they are seniors we could do something,” she said. “Did I think we were going to win 16 games? I don’t know about that. But certainly, I thought this was going to be a year that we could do some things.”

After watching the team practice for the first time, assistant coach Rob Klatte believed in what he saw.

“I looked at (co-head coaches Rob Alman and St. John] after watching us train for about two weeks and I was like, ‘It’s a special team, like, we can do something special,’” he said. “But that’s just possibility, that’s opportunity. There’s no guarantee… you don’t know what twists and turns a season is going to provide.”

The Bulldogs have several things up their sleeves that make them a scary opponent for Ohio State. One advantage is how quiet they are.

“I think our only advantage is being an underdog,” said senior midfielder Randi DeLong.

“We’re always the underdog,” senior midfielder Sophia Maccagnone added. “I think that’s something we always really enjoy because people don’t expect us to come out as hard, and we like to surprise people.”

Another advantage the team has is their coaching staff. St. John played in the NCAA Tournament as a soccer player at Purdue. With that, she is able to relate to the girls and help them understand how to play in such a high-stakes game.

“I can only tell you I remember being really excited about doing it. It was the first time that Purdue had gone to the NCAA Tournament,” St. John said. “I just remember that feeling of, ‘This is pretty cool playing now, when literally three fourths of Division I teams are done playing.’ So I can relate maybe a little bit. I’m encouraging these kids to really relish that … and to know what an awesome experience that they get to have that night.”

Also of great help is Klatte, former head women’s soccer coach at Purdue University. Klatte is the only member of the staff that has coaching experience in the NCAA Tournament, and St. John is taking advantage of what her collegiate head coach has to offer.

“I’ve actually been asking him about some of the NCAA Tournament rules,” she said. “Just even game protocols and things like that, mindset going into the NCAA Tournament, because we often talk about three seasons; nonconference, conference and your conference tournament. Well, this is a fourth season that none of us at Butler have been a part of.”

Klatte hopes that he can be as beneficial to his fellow coaches as he appears to be.

“(Hopefully I can give) a bit of a rudder and guidance, steering and trying to ensure that we never get too high and never get too low,” he said. “(I’m) just trying to provide the young ladies with confidence and make sure that they stay focused on the things that they can control.”

On Saturday, certainly anything can happen. The fact that the players have no experience in the tournament could be a detriment. However, Maccagnone doesn’t see it that way.

“I think the great thing about it is that we have no expectations; no expectations for what we’re going to receive,” she said. “We just know it’s going to be a great game, a great tournament, and it’s just an awesome opportunity.”

While, Maccagnone is focusing on the excitement of the tournament, DeLong prefers a different approach.

“I’m just going into it as if it’s another game, just because there’s only two teams, one soccer field, a soccer game and 90 minutes,” she said. “It’s just a regular game.”

Typically the players do not research the opponent too heavily. They leave that up to the coaches. DeLong, however, has spent the last few days figuring out just who Ohio State is.

“I’ve been doing some research online,” she said. “I’m looking at records, stats, how they did against certain teams, highlights of different games that they’ve been playing, players that they talk about in their press releases and everything.”

As for the game, the team is focused and ready to take on Ohio State.

“I feel that the team has had that time to have a refocus, and I think certainly it was an enjoyable experience [last week] and well-deserved for the team,” St. John said. “We’ve now hit a point where it’s on to the next, and you start chasing that feeling of winning because you like it so much that you start to put in the work for it.”