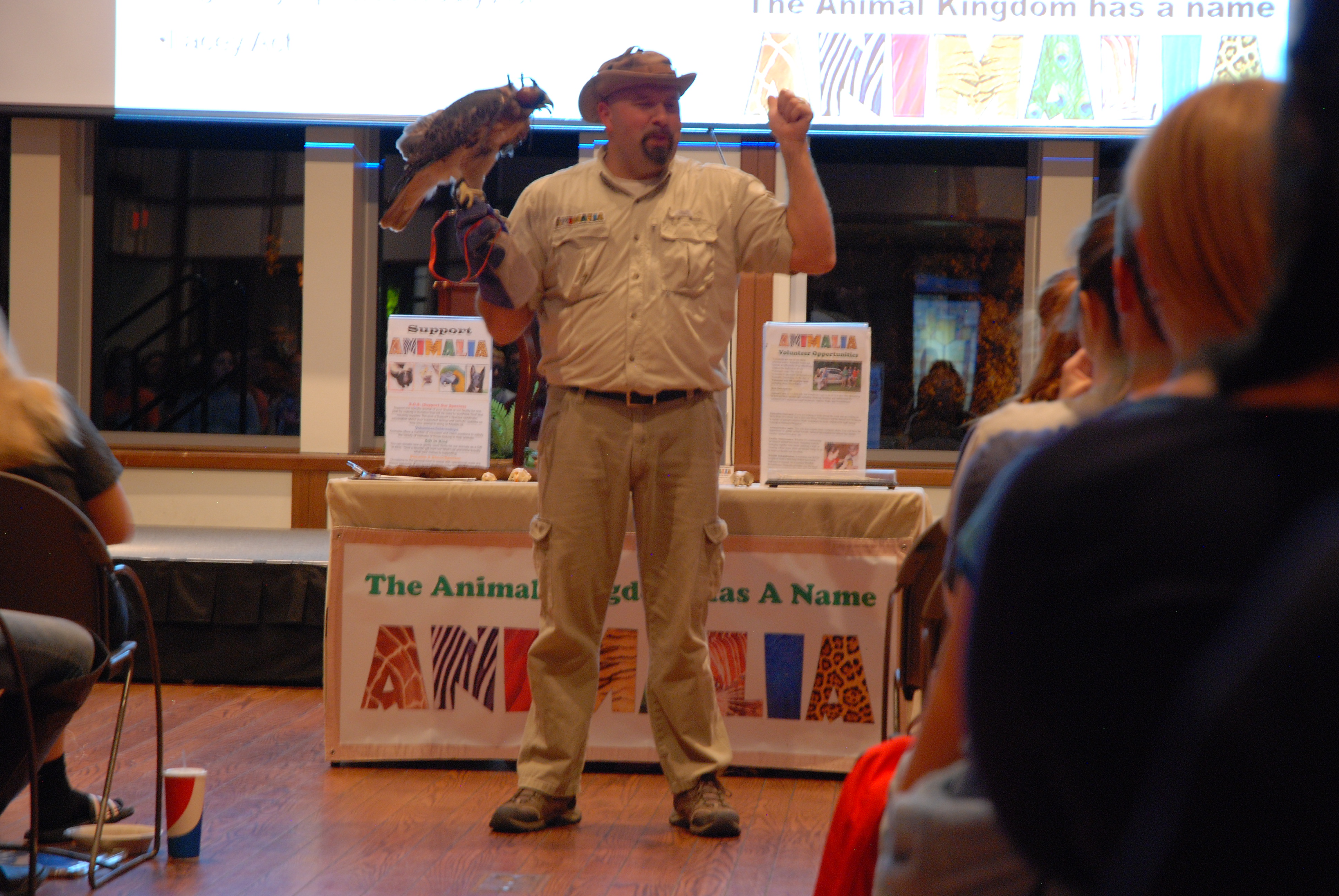 A man with a goatee, khaki pants and shirt and a bucket hat stood at the front of the Reilly Room. Perched on his hand rested a red-tailed hawk, a cousin of the bald eagle. People around the room gasped as they saw the bird flap its wings.

The man holding the hawk, Joel Vanderbush, was the founder of Animalia. Animalia started in 2005 as a consultation company to build outreach, volunteer and animal training programs at zoos across the country.

Students sign up for Animalia Newsletter. Photo by Michael Brown.

In 2009, Animalia was launched as a non-profit organization. Today it serves to help animals and to educate people not only about endangered species, but also about animals in their own backyard.

The evening in the Reilly Room was filled with different feathered, furry and even scaly creatures. One example of what Vanderbush displayed was two chinchillas, the world’s softest animals. The audience learned that it takes approximately 250 chinchillas to make a full-length coat, which is one reason why they became extinct in the wild.

Throughout the evening, Vanderbush received help from one of his previous interns, Heather Bates, a senior at Butler University. Bates detailed in an interview after the event all the things she learned from her internship at Animalia.

“I learned a ton,” Bates responded while holding a ground boa. “I learned what all the animals eat. I had to feed them in the morning and at night. I also learned how to handle them. I got to do so many different things.”

The internship opportunity allows students to do possible tasks such as animal care and handling, education outreach, wildlife rehabilitation and horticulture practice.

However, people don’t need to work at Animalia to make a difference in their ecosystem. Vanderbush explained how everyone in the audience can help and inform others.

Freshman Lila Filer learned that a prominent animal in her home state is suffering.

“[I learned] that prairie dogs are having problems,” Filer said. “Since I’m from Colorado there are lots of prairie dogs, and I never really thought of that.”

“You can tell that they’re really learning something, and that they’re taking it and keeping it in,” he said.