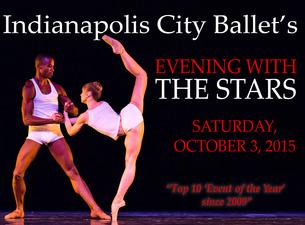 Several of the top names in dance honored Butler University this weekend.  The seventh annual Evening With the Stars took place in Clowes Memorial Hall this past Saturday.  It showcased top performances in ballet, Broadway dance and ballroom with both new and well-known dancers from all over the world.

The first performer of the evening was 12-year-old Leah Danek.  The Indianapolis native was featured because she was one of the youngest finalists in the Indianapolis City Ballet Competition in June, Meehan said.

She performed a variation from “La fille mal gardee.“  The dancer showed high levels of professionalism despite her young age.

The dancers blew the audience away with their high levels of skills.  Bosco whipped multiple fast “fouette” turns and Pillette’s jumps seemed to float in midair. The young dancers train in New York City with Edward Ellison’s training program.

The next piece performed was the act two pas de deux from the romantic ballet “Giselle.”  It was performed by famous ballet dancers Daniil Simkin and Misa Kuranaga.

Both Simkin, a member of the American Ballet Theatre in New York City, and Kuranga, of the Boston Ballet, are at the highest level a dancer can be at, called a principal.

“The ‘Giselle’ was the best part,” sophomore Joel Morin-Kensicki said.

The following piece was completely different from the previous soft and gentle ballet.  “Espana Cani,” performed by Antonina Skobina and Denys Drozduyk, was a high-energy Spanish-influenced ballroom dance.

The famous Sugarplum pas de deux from “The Nutcracker” was shown next.

The final piece of the first act was another remake of a classic.  The “Romeo and Juliet Balcony” pas de deux follows Shakespearean characters Romeo and Juliet as they dance together and have their first kiss.

This new take on the dance by Leonid Lavrovsky was performed by principal dancers Evgenia Obraztsova and Vladislav Lantratov from the Bolshoi Ballet in Moscow, Russia.

“’Romeo and Juliet’ was my favorite,” aspiring ballerina Fiona Huber said. “Evgenia was so beautiful in it.”

Act II opened with another winner of the Indianapolis City Ballet Competition, 18-year-old Daniel Durret.  The gold winner of the oldest age division performed the “James Variation” from the romantic ballet “La Sylphide.”

The next piece included the choreographer in the piece.  Whiteside choreographed the contemporary pas de deux “On the Water” and performed it alongside Murphy.

Ballroom dancers Skobina and Drozdyuk returned to perform “You and I,” a much more sensual but still Spanish influenced ballroom piece.

The next dance was a section from the hit Broadway musical “On the Town.”  Ballerina Georgina Pazcoguin and Tyler Hanes performed the “Dream Sequence,” where Hanes’ character dreams about having a boxing-style fight with Pazcoguin’s character.

Simkin returned to the stage with the self-choreographed “Les Borgeois.”  This piece was about a young French man mocking the upper class and then ironically becoming one of them.

“I feel it connects to a young and old generation of dancers,” Simkin said.

The final piece of the night was performed by Obraztsova and Lantratov.  They performed the “Don Quixote” pas de deux, a Spanish-themed classical ballet.

The couple wowed the audience with their fast turns and gravity-defying lifts so much, audible gasps could be heard throughout the house.

“I’ve seen this pas done a million times, and that was one of the best ones I’ve seen,” dancer Isabel Amador said.

“There was beautiful dancers all over the world.  We all have something different and I need to show what I can do,”  Obraztsova said.

The evening celebrated beautiful movement and a passion for dance.

“Indianapolis City Ballet Gala is second to none in the world,” Meehan said as he closed the show.