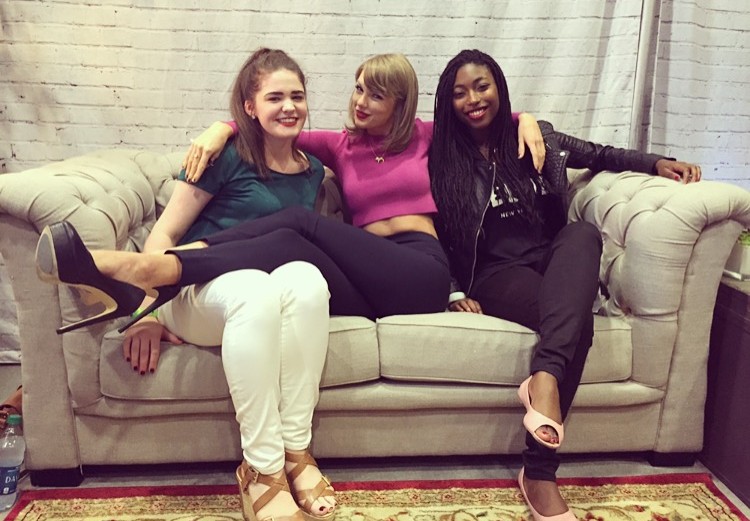 I have always been one of those people who seem to watch things happen to other people. You know, when someone has something incredibly fascinating happen to them and they share it with the world and you just sit there and attempt to live through it vicariously?

Maybe they went on a cruise around the world, or maybe their parents bought them a brand new car. You sigh and think, “Maybe one day,” never really expecting it to actually happen to you.

For me, that “one-day” occurred Sept. 16 –the day I was going to see Taylor Swift live. It was of those days where absolutely everything that could ever possibly go wrong was going wrong.

I didn’t have much time to prepare for the concert. My friend and I had split up the fangirl responsibilities: she would make the posters and I would buy the supplies to do some last minute bedazzling. I wasn’t able to get to Target until the day before the concert. Poor choice.

I was a walking plague at the time, coughing and sneezing constantly. My throat was swollen and my head was pounding incessantly; but this was the day I had been eagerly awaiting the last nine months and I was going to make the most of it.

Our trip took longer than expected, but that gave me some extra time to do some last-minute research– or maybe some would call stalking. For this specific 1989 World Tour, Swift didn’t have a meet and greet that fans could purchase tickets for. Instead, her mother Andrea Swift walks around and picks random fans during the show to meet her afterwards, known as Loft ‘89.

On top of making giant, Polaroid-photo-resembling posters clad in strings of lights, we decided  to have something to give Swift’s mother, in hopes of  bettering our chances of holding a conversation with her and receiving the potential opportunity to meet her daughter. My mind immediately thought of flowers.

We arrived at the concert in a haste.

Even though we were seated on the far side from the catwalk and we only knew one song by Vance Joy, the opening act, my friend and I were determined to have a good time.

Eventually the lights dimmed and the crowd let out a deafening roar. This was the moment everyone had been waiting for. The intro to her song “Welcome to New York” began and our bright posters flailed around the dark stadium like fireflies.

During the middle of one of her songs, teenage-girl squeals caught my attention. I saw Swift’s mother walking down the aisle, security guards forming a circle around her. I frantically grabbed for the bouquet on my chair, but by the time I looked up she had disappeared. I refused to leave the stadium with that damn bouquet.

My arms were aching from holding up the poster and my voice was sore from screaming, but I was going to give this experience my all. As I swayed to Swift’s song “I Wish You Would” a swatting on my left arm abruptly interrupted me. Confused, I looked over to my friend.

Sure enough, Swift’s mom had reappeared. My friend shouted to me, “Go!” I grabbed the bouquet without a second thought and ran.

I realized the guards may not let me pass, so I thrust the bouquet in front of me, under the guard’s arms and held it out to Andrea.

A smile lit up her face as she pushed through the barricading arms to hug me. Her sweet-smelling perfume filled my nose.

About a minute later she walked past us yet again and my friend stopped her and asked for a picture. Upon her arrival, she looked us over and at our ridiculous posters and smiled.

“Are you guys the ones who got me the bouquet?” she asked. I nodded enthusiastically.

“Have you guys ever met Taylor?” she asked.

This was it. “No!” my friend replied.

“Would you lie to Mama Swift?” Andrea asked.

Andrea smiled before motioning to her assistant. A lady walked up to us and began strapping bright green wristbands around our arms entitled “Loft ’89,” and handed us a purple slip telling us where to meet after the show. We were met with various reactions from other audience members, ranging between short “congratulations” from parents to angry glares from teenage girls.

We were going to meet Taylor Swift.

I couldn’t concentrate the rest of the concert. All I could think of was the fact that I was going to meet Swift and debate what on earth I was going to say to her. This was happening to me. Not to a distant friend or an acquaintance, but to me: Taylor Jankowski.

After the final song, “Shake it Off” and a confetti shower, the show ended.

We sat down at the meeting spot with about 15 other people and listened to instructions from the workers regarding rules and other behavior expectations. Each group was allowed one photo and each individual was allowed one autograph.

We were escorted to the area backstage where we would meet her. We passed showcases of costumes she had worn in music videos and performances and walked down this long hallway to a lounge area set up with couches, a TV, rugs and a photo booth.

Taylor’s mom walked in and began to talk with the various groups around the room. Upon reaching us, she thanked me yet again for the flowers. Best $5 I’ve ever spent.

She informed us that it’s really hard picking people to meet Taylor, and while a lot of people will go all out and wear light-up tutus or paint their whole bodies in crazy colors, sometimes it’s solely about the mere look or the feeling you get from a person.

When she realized we were together she said it was “magic.”

Shortly after, Taylor walked in. I thought I was going to make a fool of myself, but she was just another human being, standing about 10 feet away from me.

Yes, she is incredibly talented, but at the end of the day she’s a person, just like you and me. It felt completely normal to be in a room with her. She made a circle around the room, stopping to have conversations and take photos with the scattered groups.

Some people were jumping up and down and others were crying. And as much as I had initially thought I would’ve done the same, I felt completely at peace watching her walk around the room and talk with people.

Many of us are so eager to put these people on an unattainable pedestal or to define them as a “celebrity,” but fame is not an identity. While it may be found in Taylor’s identity, her identity isn’t fame.

My friend and I were the last group that Taylor visited. I still remember the first thing she said.

“This makeup, and your eyebrows: Wow, I wish I could get mine like that,” she said. “I can never draw mine in well, so I just never have any.”

We laughed, and this single sentence formed a friend-to-friend bond. The three of us talked together about little things, like our chipped nail polish and our general experiences with music. It didn’t feel like I was talking to “Taylor Swift,” but rather, Taylor.

She autographed each of our phone cases and when it came time for the photo we wanted something unique, something that wasn’t just another photo. When we told her this she enthusiastically agreed.

Jankowski (left) and her friend with Taylor Swift.
Photo: Courtesy of Taylor Jankowski

When the photo was snapped, we all stood up. Before she left I took another opportunity and told her what I had wanted to tell her since the sixth grade: I thanked her for being such a positive contribution to the media and for keeping her head up. I told her I admired that she did not let her character or what she believed in to waiver. I couldn’t imagine the challenges she must go through every single day, with the media constantly trying to knock you off the pedestal they placed you on.

She was able to laugh over this with us and when it came time for her to leave, I wasn’t sad it was over, but rather very appreciative that it had happened. I had gotten the chance to have a 15-minute conversation with an absolutely incredible individual.

When talking about it with other people, it felt like a completely normal experience I was sharing. Taylor is one of the most sweet, down to earth, and humble people I’ve ever met. This is both a memory and a friend I’ll never forget.