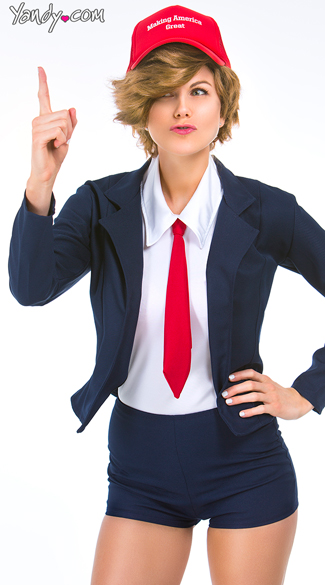 I am a firm believer in Halloween. I believe September isn’t too soon to begin decorating or preparing a costume. I believe “It’s the Great Pumpkin, Charlie Brown” should be watched annually. And I believe that when it comes to costumes, humorous is sexier than just simply wearing less clothes.

So, I have compiled a list of 13—see what I did there?—Halloween costumes that should be on your radar this year.

Let us just start with the one that sparked the whole idea of this piece—the sexy Donald Trump costume.

Officially called the “Donna T. Rumpshaker costume” on Yandy.com, it is composed of a red hat, what appears to be a shorts-suit and his infamous hair. It may be ridiculous, but in pursuit of irony, humor and making people extremely uncomfortable, I would fully recommend this costume—“Make America Great” this year with your choice in guise.

Second on the list is the sexy squirrel costume—because who doesn’t want to sexualize animals? However, this costume isn’t too scantily clad. It’s a very subtle sexy, and it shows Butler University campus squirrels that they can feel sexy, too.

And just to do one for the guys—which are harder to find than I would have thought—there is also a sexy skunk costume available through Yandy.

And some animals are better off represented after they become extinct. Next on the list is the sexy dinosaur. While I personally think the costume itself does not actually look anything like a dinosaur, I can applaud the innovation—perfect for Jurassic World lovers and paleontologists.

When all else fails and you can’t think of a witty animal or pop culture icon to be, sexy food seems to be the next go-to. Since Indiana is known for its extensive cornfields, a sultry stalk of maize could be a costume option. One could even opt for a carrot or a banana—after all, you would be promoting healthy choices.

Now, I am an Avengers fan. I love Marvel and I own a Spiderman blanket, lunchbox and two T-shirts. So you can imagine that I would fully support superhero costumes—that is, until they become impractical.

OK, I get it. Girls want to spice up their Spiderman or Superman costumes—but there is physically no possible way one could fight crime or save damsels in these so-called “sexy superhero costumes” without something fighting its way out of the costume.

Spiderman wore a spandex suit for a reason. Superman did not wear a bandana as a shirt, because frankly, that would be illogical for flight. And Ironman is who he is because of his bulky, iron suit; take that away and you might as well just be sexy Tony Stark.

Sometimes, there are just costumes that scream offensive and unrestrained—such as a sexy Geisha or a “sexy space slave.”

Let me just take a minute to brief you on what a Geisha is. While these women traditionally do entertain men through dance, song and conversation, they were certainly not barely clothed while doing it. As a matter of fact, they wore loose fitting, bulky, floor-length robes—they were still sexy while clothed.

And a sexy slave? A sexy space alien—maybe. But why are individuals sexualizing slaves, even if it is a fictional one from outer space?

The final costume on my list does not necessarily look sensual—but more so suggests something sensual for our generation. And for the evident humor, the “Netflix and Chill” costume takes the crown for the sexiest costume in my book. Because, frankly, what’s sexier than a slew of movies, a fuzzy blanket and a guy or girl with a confident sense of humor?

But despite the absurdity, and my utter lack of approval of so many “sexy” costumes, I can always count on them to give me something to talk about. Something to make me laugh about, or to just downright annoy me.

So, I wouldn’t want Halloween stores to present their merchandise in any other way. Bring on the absurdities, guys. Because, as I am a firm believer in holiday tradition, my Halloween season just wouldn’t be the same without sexy corn and Donald Trump costumes.