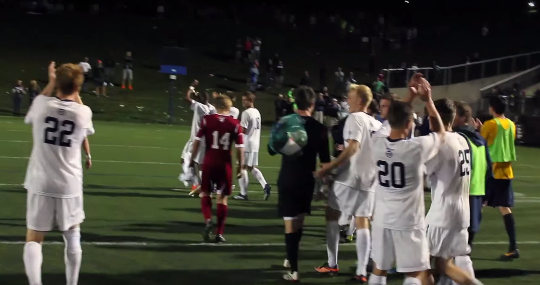 The Butler men’s soccer team had gotten out to a 5-1-1 start to the 2013 season, the program’s first as a member of the Big East Conference.

Indiana University was 3-4-2, with three of its losses coming in overtime. Not stellar, but they were, in fact, the defending national champions.

Ranked No. 23 in the nation, the Bulldogs were hungry for a big-time statement win on their home turf against a traditional in-state powerhouse. But the Hoosiers didn’t care, building a 2-0 lead early in the second half.

And then the magic happened. In front of more than 5,000 fans at the Butler Bowl, the Bulldogs pulled off a stunning comeback under the lights.

Senior Jordan Burt got the rally underway by scoring one in front of the goal in the 87th minute.

Just 69 seconds later Vincent Mitchell sent a cross from the right side in front of the goal and freshman David Goldsmith sent a header to the bottom right corner, tying the game.

The freshman wasn’t done yet. In the 104th minute, he flew in towards the left post and sent another header past goalie Michael Soderland, sending the Bowl into a frenzy.

Butler head coach Paul Snape said that was a moment he will never forget.

“(Adkins) sent a fantastic cross over, and Goldsmith was just there at the right time, like he is all the time, and he headed it, and we won,” he said. “It was one of the best feelings I’ve ever had in soccer to win a game, especially against such a quality opponent in front of our home crowd.”

Butler went on to the Big East Tournament semifinals that November where it lost 1-0 to Marquette in overtime.

The Hoosiers were unable to exact revenge on the Bulldogs last season when they played to a scoreless tie in Bloomington. They will again be looking to right their late-game meltdown when they pay a visit to Indianapolis Wednesday night. Kick-off is set for 7:30 p.m. at the Butler Bowl.

What you need to know leading up to Wednesday’s big match with IU –> http://t.co/b0O5pD0p0g pic.twitter.com/KxB0kmZ32t

Indiana head coach Todd Yeagley said he’s got a young team, but he believes they have big things in store for this season.

Yeagley said getting a win in Indianapolis Wednesday will be no easy task.

“Butler is having a fantastic year,” he said. “They’re undefeated, and they’ve played a couple of nice teams.”

“This is one of the strongest Butler teams I’ve seen in a long time. We’re going to have a really difficult challenge Wednesday.”

Goldsmith, now a junior, leads the team with three goals this season. He said the Hoosiers, as always, will be a tough matchup, but the Bulldogs won’t be backing down.

“They’ve got a great program, they always produce really good teams,” Goldsmith said. “But we fully believe we can play anyone in the country. So we’re expecting nothing more than a win Wednesday night for us.”

But Goldsmith said he knows it won’t be easy to remain unbeaten.

“I’m sure, obviously, with them coming to our place, they’re going to look for bitter revenge from what happened last time, and we know that,” he said. “But we’ve beaten them in the past and we fully believe that we can do it again. It’s going to be a special night, and one that we’re really looking forward to.”

The Bulldogs and Hoosiers are even at 3-3-2 over the last eight meetings, including a 1-0 upset win for the Hoosiers in the 2009 NCAA Tournament when the Bulldogs were the No. 12 overall seed.