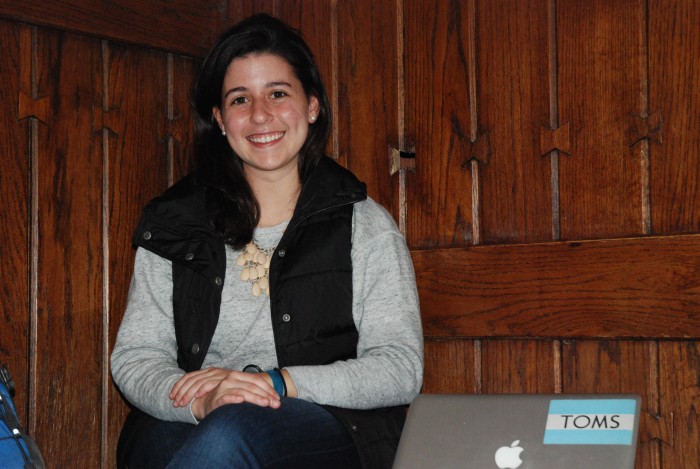 Jenny DiVincenzo sits on the second floor of Jordan Hall, busily typing away at her laptop.

She is working on a 10-page paper discussing the theme of marriage in Geoffrey Chaucer’s “The Canterbury Tales.”

The stories are all written in Middle English, which she says makes the assignment more difficult.

Perhaps her favorite story in the set is “The Wife of Bath’s Tale,” she said.

“She’s kind of the feminist of her time,” DiVincenzo said. “She’s on, like, her fifth husband and jokes about finding her sixth. Even though it was written in the 1300s, you can still find feminist connections.”

This 10-page assignment is just one of many the junior has to finish before wrapping up her semester.

DiVincenzo is a middle/secondary English major and special education minor from Wilmette, Illinois.

During her time at Butler, she has become a sister of the women’s fraternity Alpha Phi, worked as a swim instructor at the Health and Recreation Complex, earned her English as a New Language license and joined College Mentors for Kids.

DiVincenzo learned about College Mentors for Kids at Block Party her freshman year at Butler.

“Since I’m an ed major, it goes pretty well with my major,” she said. “I started off as a mentor, and then I was something called a general manager my sophomore year.”

As a general manager, DiVincenzo helped oversee a group of Butler student mentors and their mentees, or little buddies.

This year, she applied to be a vice president, and got the job.

“A lot of the kids come from lower-income backgrounds and don’t have very much to look forward to during the week,” she said. “We bring them to Butler’s campus, so it’s fun to show them around and get them excited about things that they might not necessarily be exposed to.”

DiVincenzo also plans to use her major, minor and licensure to help people once she leaves Butler.

The junior is a triplet to two brothers, one of whom has Down syndrome and inspired her to pursue education.

“I’ve always been kind of exposed to people with special needs my entire life,” she said. “Originally, I wanted to be a special ed teacher.”

But once she got to high school, she realized her passions went further than just special education.

“I love reading, and I like writing papers,” she laughed. “I’m weird. So I’m going the middle/secondary English route, but then I also got my special ed minor. I’m completely done with that.”

Now, DiVincenzo is exploring her interests in English as a second language.

But in terms of the college experience as a whole:

“You have to take advantage of everything you can while you’re here,” she said. “That’s what I’m trying to do.”