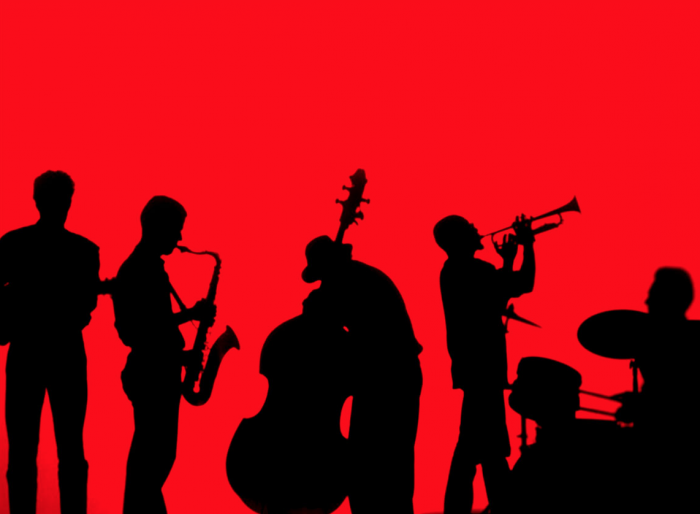 A wave of freshly ground coffee beans and the hoppy sweetness of a fresh brew filled The Thirsty Scholar last Saturday during a performance by Broad Ripple’s The Sunset Four.

The gentle sounds of smooth jazz caressed the ears of listeners, and an unoccupied wooden barstool sat at the bar.

The soft light emitted by the old-fashioned fixtures dimly illuminated the room, highlighting the abstract paintings on the walls and the rustic-but-classy décor behind the bar.

As the audience of the packed house mingled about, their heels clicking on the checkered tile floor, the band prepared to begin its first song. A man in a plaid button-up and shorts, sitting in front of the keyboard, pulled the microphone and introduced himself.

“Hey, y’all, I’m Andy Greenwell. And we are The Sunset Four,” said the pianist and vocalist of the group. “Take it off, Jordy!”

The band jumped right into an upbeat funk rhythm as Greenwell’s fingers flew up and down the keys.

Long delved into the flow of the music as the drum sticks became an extension of himself, connected by the rhythm.

The trance of the music broke as the bartender offered a sample of the brew of the day and a menu.

“This here is the newest and hottest India Pale Ale,” the bartender said. “Just let me know when you are ready to order.”

The lights dimmed further as the band began a rendition of Billy Joel’s “Movin’ Out.”

The people buzzing about the rest of the tables all stopped to listen.

Guitarist Patrick Wright coaxed the melody out of the strings.

Even the bartender halted work to listen.

At the end of the song, a roar of applause went up, and the bartender resumed his duties.

Greenwell showed his gratitude by saying, “Thank you very much, ladies and gentlemen.”

Bassist Alexandro Cazares began to walk his fingers up and down the instrument.

The band concluded its final song with a strong downbeat and cymbal crash.

Applause once again rang out in the bar, and the members of the band smiled and waved in gratitude.

With the show concluded, the band mingled with the audience, showing appreciation and sharing a few drinks.

Shaking hands and sharing smiles, Wright said, “Thanks for coming out! It was good to see you here.”