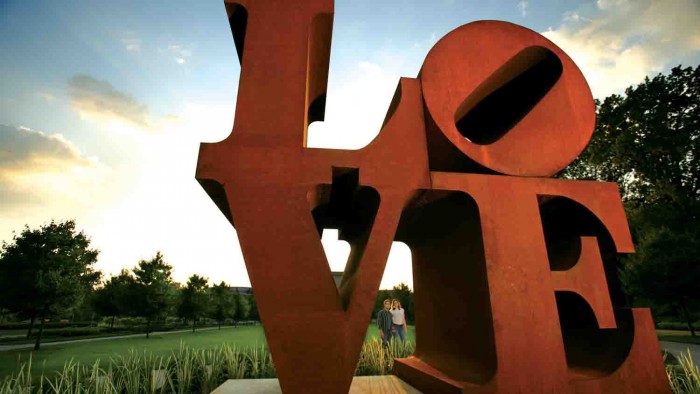 Just living 40 minutes from downtown Indianapolis, I had heard of the Indianapolis Museum of Art before. And I had always intended to visit at some point. I love museums. I love culture, and art, and experiencing new things—especially free things.

Up until April 7, the IMA offered free admission to all. But now for non-members, it will cost $18 to immerse oneself in the rich culture of the Mediterranean and to gawk at the contemporary exhibitions. And honestly, I am glad I visited before the dramatic spike.

I was lucky to finally be forced to go on a class field trip a few weeks ago, thus piquing my interest even more so that I made an effort to visit last week with a friend.

And at the time, I was absorbing all its priceless wonders, from the Asian art, to the nature-inspired exhibit, where visitors can create their own nature-esque masterpieces (largely populated by small children, I might add).

But I was determined not to miss out on a single aspect—taking advantage of all that was at my fingertips—because I knew, after that day,there would be a slim chance I would have that extra $18 to spend.

But that was before a few misconceptions were cleared up.

“With the exception of a brief stint with a $7 fee in 2006 and 2007, the IMA has been free since 1941,” according to an article in the Indianapolis Star. This nearly $20 jump seems rather extreme and is certainly going to impact who visits the museum and how often they do.

Stephanie Perry, manager of public relations at the IMA, said the decision for one collective fee was not made lightly.

“Since 2007, we have been offering à la carte pricing that consists of separate ticket pricing for special exhibitions and parking,” Perry said.

“After a great deal of research on visitor preferences and models of peer institutions, we have decided to move to a single admission ticket that grants visitors access to our entire campus.

“Through research we conducted, we learned that visitors disliked having to pay for these experiences separately.”

She also said the admission price is intended to offer financial stability for the museum; free admission has meant most of its funding comes from endowments, fundraisers and memberships. Over the years, she said, the museum has overdrawn on its endowment.

But how will this impact non-members and the frequency of visitors? Perry said the IMA has already seen an increase in memberships since announcing their new policy, so a drop off in attendance is not expected.

However, many students—including myself—are concerned with how this impacts class trips and even just leisure attendance. With an $18 fee, local college students may deter from the cultural experience—one that is conveniently located just a few streets from Butler’s campus.

Fortunately, there is good news.

“Students at four-year, public and nonprofit colleges and universities in Marion County, which includes Butler University, will receive free memberships to the museum with a valid student ID,” Perry said.

“As members, students will receive free, unlimited admission to the museum, discounts at our on-site retail locations, access to exclusive member preview events, and discounts on programming and events such as The National Bank of Indianapolis Summer Nights Film Series.”

And for those students who may wish to take non-members to the museum, Perry said the first Thursday of every month from 4-9 p.m. is free for everyone. There will also be free community days, such as National Museum Day in May.

The misconception with the fee—while the jump could have preferably been a smaller one—is that there would be no free opportunities. But the IMA is not guzzling out money at all, but rather trying to keep funds to keep the culture flowing for the community.

And you really cannot put a price on culture.