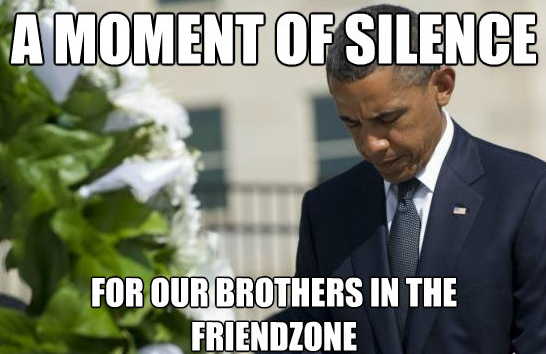 More often than not, people encounter another individual and, by means of physical appearance, choose whether (a) this individual is attractive, and could potentially be of interest; (b) he or she seems all right, but physical attraction is low, so friendship is probable, or (c) there is no way in hell this individual can be tolerated.

Therefore, the general population categorizes someone into one of three groups: the potential-interest zone, the friend zone or the no zone.

Recently, my friend and I engaged in a small debate on whether the friend zone truly exists. She argued against its actuality. And, much to my surprise, many others online agreed with her as well, in posts such as, “So You Think You’re in the Friend Zone… But it Doesn’t Exist,” and “The Friendzone Doesn’t Exist, Dickhead”—which provided more of a good laugh than convincing evidence.

I am not here to say whether it is a good or a bad thing. Regardless of one’s definition of what being in the “friend zone” means, it is still there. It still exists. And more often than not, unfortunately, the friend zone has a negative connotation, a connotation rooted in insecurity and misperception.

Freshman Caitie Santo said that, while she believes it exists, the conflict lies within the different meanings between genders. Both genders associate the friend zone with cynicism. In reality, she said, the friend zone is not a negative concept at all.

“You can deem someone a friend for many reasons, but oftentimes we take it as a negative reflection of ourselves,” Santo said. “I think this is because society has made it bad to be rejected by another person, even if that person has valid reason to do so. Not everyone is good for one another, and not everyone works out for one another.”

An individual can change that initial “A, B, C” impression of his or herself. If one is categorized as a friend originally—and I say this from experience—a charming, genuine personality can ultimately attract someone (and oftentimes make that physically pristine, bright-smiled guy or girl with a semi-lousy personality much less attractive). Those initially in the friend zone can leave—and those in the potential-interest category can, too.

My friend argued that the friend zone does not truly exist, but rather, is a state of mind. Collins Dictionary defines a state of mind as being, “your mood or mental state at a particular time.” Anxiety, fear, and stress are all a state of mind, so does that mean they do not exist either?

It is unsettling that someone would consider such serious cases “nonexistent,” despite the fact they are a state of mind as well. I think people often imagine the friend zone as this dramatic, inescapable, nightmarish place created in the minds of those who feel wronged by the guy or girl that did not reciprocate romantic feelings.

While this can sometimes be the case, I believe the friend zone truly is a sense of structure, a sense of categorization that, socially, most individuals use—people have others they wish to befriend, and some they want to more than befriend. And the friend zone is simply just a sector in this thought process.