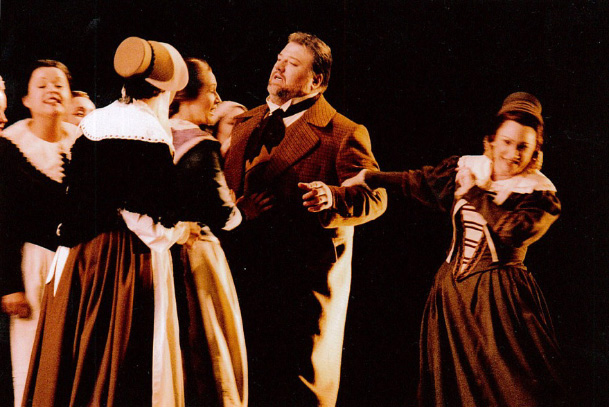 By definition, Thomas Studebaker is an impressive man.

Standing at 6 feet 4 inches, Studebaker, a voice professor, has a commanding physical presence.

But what is even more outstanding about him is his wealth of experience in the opera world.

Born in Danville, Illinois, Studebaker has lived all around the country, including Pennsylvania and New Jersey.

He recently moved from Tennessee to Indiana with his wife, son and daughter to teach full-time at Butler.

As the director of Butler University Opera Theatre, Studebaker is currently preparing for the ensemble’s upcoming concert.

Studebaker has performed in innumerable operas and concerts across the United States, Europe and Asia throughout his career as a singer.

******Studebaker is featured in the video above.

“Last time I counted, I have sung in 19 countries and been to 21,” he said. “But if you count the countries I have been through on a train, it would be more. But I only say I have been to a country if I have stepped on the dirt.”

One of his favorite European experiences was singing in an audition for the grandson of the renowned composer Richard Wagner.

But his absolute favorite experience had nothing to do with music, he said.

Instead, “it was spending time in Bavaria seeing Ludwig’s castles,” revealing his love for a dramatic, enchanting atmosphere.

Studebaker also noted that participating in the Cardiff Singer of the World competition in Wales in 1999 was a highlight of his European singing adventures.

Studebaker won his division in the competition and took home a treasured goblet of rare Welsh Crystal. This award is only attainable as a gift from the royal family.

But a real crowning jewel for an opera singer is to sing at the Metropolitan Opera, for which Studebaker has both studied and performed.

“My favorite roles with the Met were operas by Wagner: Heinrich der Schreiber in ‘Tannhäuser’ and Augustin Moser in ‘Die Meistersinger von Nürnberg,’” Studebaker said.

Despite Studebaker’s success, one does not earn the right to these experiences overnight.

Opera singing is a fine art that requires a lot of training and education, to which Studebaker’s life attests.

“Singing at the Met makes you realize all the hard work you have put in over the years has paid off,” he said.

After completing his graduate studies at the Curtis Institute of Music, one of the most prestigious musical conservatories in America, Studebaker was accepted into the preeminent Young Artist Program at the Met before launching his performing career.

Affectionately called “Studes” by his students, Studebaker imparts all of his performing experience in his teaching.

After a semester of rehearsals for the ensemble, Studebaker said he is confident that the theatre’s upcoming recital will be phenomenal.

The concert will consist of selections from classic operas such as “La Bohème,” “L’elisir d’amore” and “Così fan tutte,” to name only a few.