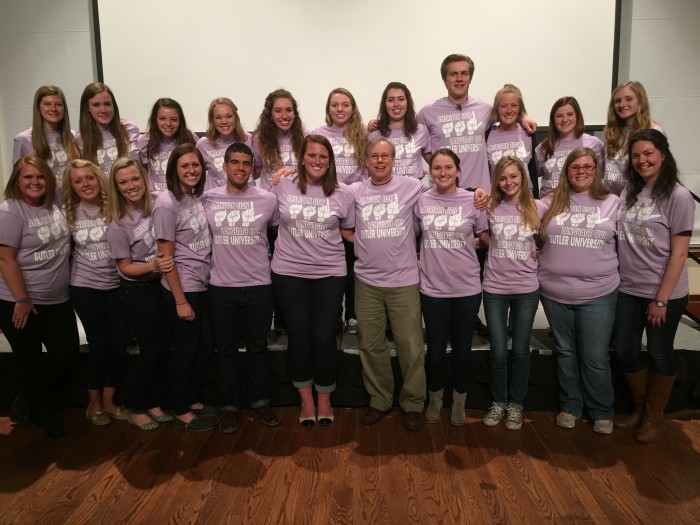 Each Wednesday night on the third floor of Jordan Hall, an organization works hard to have its culture be heard on campus and in the community.

Oddly enough, upon entering one of the meetings, one would find the group making little to no noise.

American Sign Language Club is a group of students occupying many majors, ages and backgrounds.

During their meetings, the members of ASL Club learn about the basics of vocabulary and grammar with signing.

They also hope to immerse themselves in the deaf community in order to better appreciate Deaf culture.

“Before I came to Butler, I thought that sign language was just another language, but it’s really a culture,” she said. “That’s what we really try to show to people.”

Four semesters of American Sign Language are offered as curricular classes at Butler, where students can get an in-depth view of deaf culture and increase their proficiency in ASL in a more formal setting.

ASL Club is one of only two clubs within the communications sciences and disorders major.

While the club attracts many students within the College of Communication, any student from any major can join.

“Anybody can join the club,” Hauschildt said. “There’s absolutely no requirement or proficiency to join this.”

Molly Henderson, a junior CSD major, said she enjoys ASL because of its uniqueness.

After taking Spanish in high school, she wanted to learn something different.

She said ASL has kept her engaged.

“It’s pretty tough to learn, but it’s fun once you really know how to sign,” she said.

The ASL Club and classes are greatly involved with the Indiana School for the Deaf, a nationally accredited boarding school for deaf students.

The school teaches students from preschool to high school ages.

“I like being involved in sign language at Butler because the ASL community is so close-knit,” senior CSD major Steven Gianakas said. “When you go to the Indiana School for the Deaf and other events like that, you can see how bonded they are as a community. I think that’s a really beautiful thing.”

“Hands on Fire” is an annual event hosted by ASL Club on Butler’s campus, featuring performers from the Indiana School for the Deaf performing skits, songs, ABC and number stories, poems and storytelling.

Butler prides itself on being the only university in Indiana that allows deaf school students to perform on a collegiate stage.

“‘Hands on Fire’ is bigger than you expect,” Gianakas said. “The first time I did it I wasn’t expecting such a big turnout, and there weren’t even enough chairs for the audience.”

While many of the audience members will be deaf, Butler students are greatly encouraged to attend, whether or not they have any prior knowledge of ASL.

“It’s neat to see these deaf children and high school students perform,” said Glenn Carlstrand, a professor of ASL at Butler. “It’s a cultural experience to see something that’s totally different, and maybe the first time some students are meeting deaf people.”

The members of the club emphasize that people who attend the event without any knowledge of sign language usually leave with a new appreciation for it.

“People are in awe of the way that these people interact with one another and the language,” Hauschildt said.

Junior CSD major Sarah Spaulding said that this opportunity is one that no student should miss.

“We’re so lucky to go to Butler,” she said. “We’re so close to the deaf community, and the Indiana School for the Deaf is right in our backyard.”

All in all, “‘Hands on Fire’ is just a really unique event,” she said.