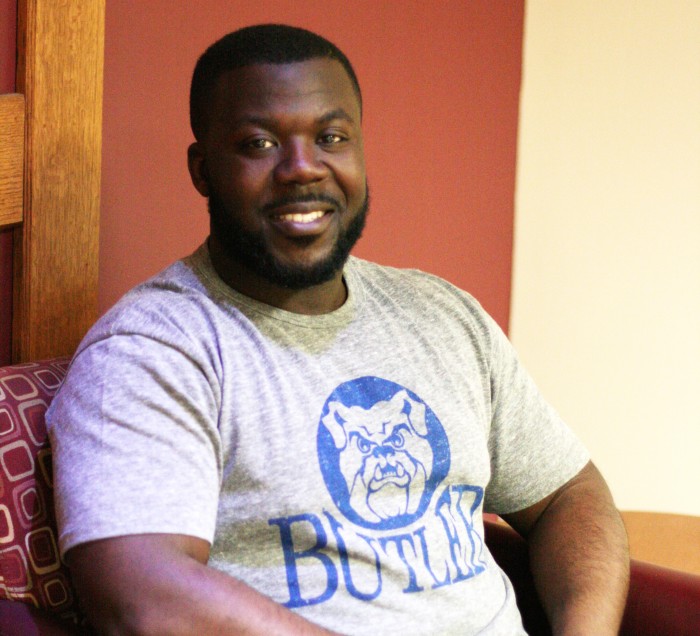 Boateng, a human communication and organizational leadership major, is from Indianapolis. However, he was born in Italy, and his parents are from Ghana.

With so much he could identify with, he said he was proud to be a Butler student after transferring from Indiana University in spring 2014.

At first, however, he did not feel accepted into Butler’s atmosphere.

In developing relationships with his peers, he began making his mark by speaking encouraging words through his own personal development movement called CONQUER.

Boateng created CONQUER while serving as a strength and conditioning coach at Indiana University Health Sports Performance over the summer, inspiring young people to overcome their obstacles.

The ostracization he felt upon first enrolling at Butler reminded him of living in Italy.

There, he was the only black student in his classes.

Boateng learned at a very young age that he was different, but that only helped him build his confidence.

Facing a similar situation at Butler, he was confident enough to reach out and meet new people.

Boateng found it beneficial to “just talk to people,” he said. “If you see a face that is not familiar, get to know them. Why not build relationships with the people here?”

“One thing I noticed about myself was that I liked to uplift people,” he said.

He said he harnessed the power of the word “conquer” to develop the name and the mission behind his movement: to take full responsibility for becoming a better person.

“For me to further promote that, I have to become that change,” he said. “People have to see me conquer me.”

Boateng said he does not know where his personal movement will take him, but he wants to be able to inspire the students on Butler’s campus.

The junior said the value that he brings to Butler is his story of overcoming his obstacles.

He said he had to overcome rejection and a lack of self-validation to be able to create the CONQUER movement.

Now, instead of feeling different, Boateng said he feels Butler is a place where he can be himself.

He said he is always in development.

“If I’m not growing, what is my purpose?” he said.