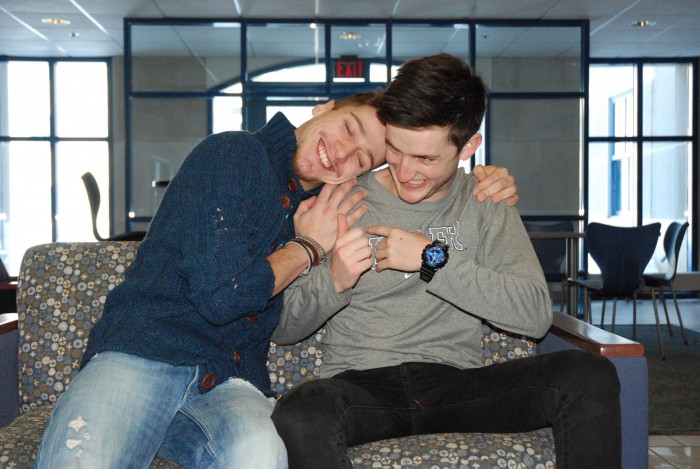 Hamish McLoughlin and Lorenzo Del Giudice are heading back from Starbucks, each with a warm cup in his hand.

McLoughlin is a business major from Adelaide, Australia. Del Giudice, from Salsomaggiore Terme, Italy, is finishing up his master’s degree in international business.

“My bachelor’s degree was in finance, but I realized maybe finance wasn’t my way,” Del Giudice said. “I didn’t really enjoy it, too many numbers. So I said, ‘Why don’t we try something different, Lorenzo?’” referring to himself in the third person.

“I really hope you put that in a quote,” McLoughlin joked. “‘Why don’t you try something different, Lorenzo?!”

Though the two easily banter back and forth, neither of them is accustomed to the cold Indiana winter.

“I’d never seen snow before I came here this semester,” McLoughlin said. “The first few times, I was like, ‘Wow! This is so cool!’ but now it’s like, ‘I hate the snow! It is kind of cold. That’s enough for now. Maybe some sunshine would be nice.’”

The day he left Australia for Indianapolis, McLoughlin experienced a temperature change from 108 Fahrenheit to minus 12.

Needless to say, both of them are looking forward the upcoming spring break.

One of the most exciting parts?

“First of all, try to guess!” Del Giudice laughed. “WARM!”

Del Giudice is meeting up with friends in Raleigh at North Carolina State University and then driving down to Miami, where he will meet his parents.

From Miami, the group is on to Key West before returning to Indianapolis.

“I don’t know if you are interested in the whole trip,” he said. “I don’t want to get too many detailed.”

McLoughlin piped in, teasing him.

“We are renting, like, a red car,” McLoughlin joked.

Del Giudice says he hopes Florida lives up to his spring break expectations.

“I have seen movies and stuff like that,” he said. “I think that I am going to find that what I’m expecting in Miami is going to be met,” he said.

Other than the weather, Del Giudice said he cannot pinpoint one specific thing he is most looking forward to experiencing over spring break.

“Some things are not suitable for a college journal,” he smiled. “That’s why.”

He had planned to visit a friend in Texas, whom he met in France in 2010. The two were going to drive to Colorado to go skiing.

On Friday, however, McLoughlin learned that his friend’s Spring Break is actually the week after Butler’s. Now, McLoughlin is trying to devise another plan.

“I think I’m just going to go to Florida,” he smiled.

Though both friends might end up in Florida over spring break, they have each traveled different places across the world.

“This is my fifth time in America,” McLoughlin said. “I’ve been to Puerto Rico, Singapore, Malaysia and then all around Western Europe.”

As far as the U.S. goes, McLoughlin’s heart, naturally, is set in San Diego.

Back home, his favorite thing is the beach, he said.

“That’s a little bit cliche, isn’t it?” he laughed. “‘What’s your favorite thing about Australia? Oh, the beach? All right, we get it.’”

Del Giudice, on the other hand, said he has traveled throughout 80 percent of Europe.

“I’ve been to Turkey,” he said. “Turkey’s in Europe? I don’t know. Anyway, Turkey, Northern Africa, United States—it’s the very first time. I’ve only been here in Indianapolis so far.”

His favorite thing about Italy? The lifestyle.

Despite its problems, “Italy is the best place in the world,” Del Giudice said.

“We take life maybe less seriously than you do,” he said. “We try to enjoy more life. As I always say with you Americans, we work for living, and you live for working.”