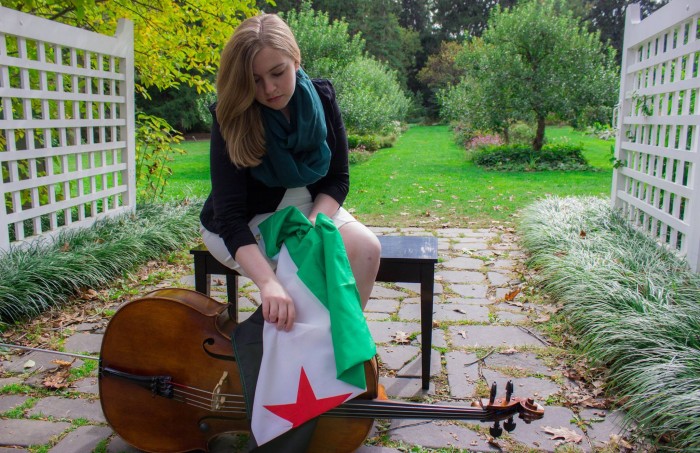 Senior Aliah Ajamoughli is an avid fighter for the Syrian Revolution.

Ajamoughli made it her life’s mission to raise awareness for Syria’s current conflict through her music.

Her decision was inspired by her family’s heritage and connection with the culture.

Ajamoughli began playing the cello in fifth grade despite her family’s pushes to pursue science.

Instead, she chose music.

“I had been told all my life that I have such a big brain and that I should do something with science or math,” Ajamoughli said. “I was scared that I couldn’t get a job as a musician.”

Thus, Ajamoughli was torn when deciding the path of her future.

Ajamoughli struggled to balance typical Syrian aspirations with her own. Her father is Syrian, and because of this, he expected her to become either a doctor, engineer or lawyer.

“Being a musician doesn’t follow the standards of what his culture expects,“ Ajamoughli said.

Still, Ajamoughli decided to follow her passion and pursue a degree in cello performance.

Ajamoughli is on her way to Indiana University’s graduate program, which is ranked between first and eighth overall in the nation in its music programs.

There, she will devote herself to ethnomusicology, the study of cultural aspects of music, with an emphasis in Middle Eastern music.

Ajamoughli intends to find a job as a professor, but she is most enthusiastic about her dream of forming a Middle Eastern ensemble as a side job to remain active in the music scene.

She is passionate about working with Syrian artists within the community.

Naturally, her upcoming recital will be completely dedicated to Syria.

She described Syrian music as having “Middle Eastern sounds with a western flair.”

“In the years past, I’ve done a song at the end of the recital dedicated to Syria, but this year I will be performing a complete western program with Syrian images,” Ajamoughli said.

There will be a brief lecture in the middle of the recital about the music leading up to the Syrian revolution and a few clarifications about the revolution.

This same topic is the theme of her honor’s thesis.

Ajamoughli has strong ties to the Syrian revolution, but they are newly discovered.

The cellist grew up in Alabama. Living in the south strained the ties that her family had inherited.

“Growing up in Alabama made me not want to associate with my Arabic heritage,” Ajamoughli explained, “In Alabama, Syrians were considered to be terrorists.”

It wasn’t until Ajamoughli was auditioning for college that she had dinner with an aunt in Michigan.

She recalls a conversation in which her mother asked her aunt what she thought would happen in Syria if they were to follow the path of the Egyptian Revolution.

“I just remember my aunt’s face going completely white and saying ‘If this happens in Syria, Assad will kill them all,’” Ajamoughli said.

Ajamoughli had never been to her homeland of Syria before, but she promised herself that she would visit that summer if a revolution did not break out.

Sure enough, not long after her revelation, a group of young boys used graffiti to speak out against the regime, which responded by torturing the boys, nearly to death.

Thankfully, the boys returned home, but their impact was unstoppable. Protests broke out in Syria and the damage could not be undone.

“One of my family members stood out on a platform on a mosque, asking for people to donate blood, and was shot by a sniper,” Ajamoughli said. “The news segment was a YouTube video that they were showing. Early on in the revolution, when the protests were peaceful, the people captured the deaths of protesters and put it on YouTube. They thought by doing this they could show the world the terrible things of Assad, but they quickly found out the world didn’t care about Assad killing his people.”

The whole country was going into complete chaos.

Ajamoughli can only speak a bit of Arabic, but she was determined, and decided that her contribution to her country would be an academic one.

She has documented the stories of brave musicians speaking out against the regime. She said she hopes to capture their stories before they are lost to the war.

“The recital’s main purpose is extending my thesis to a musical form,” she said. She also hopes to bring awareness about the revolution.

She understands that Abdul-Rahman Kassig has brought the Butler community awareness about the issue, but she also recognizes that Butler knows only a little about Syria.

“I don’t want Butler to associate Syria with ISIS,” she said. “ISIS is not the revolution.”

Ajamoughli said she also wants to emphasize that the recital will not feature any graphic images and that there will be a reception filled with food afterward.

The recital will take place on March 29 at 5:30 p.m. at Eidson-Duckwall Recital Hall. The program consists of Bach’s fifth cello suite, the Bartok Romanian Dances transcribed for cello and the Shostakovich cello sonata.