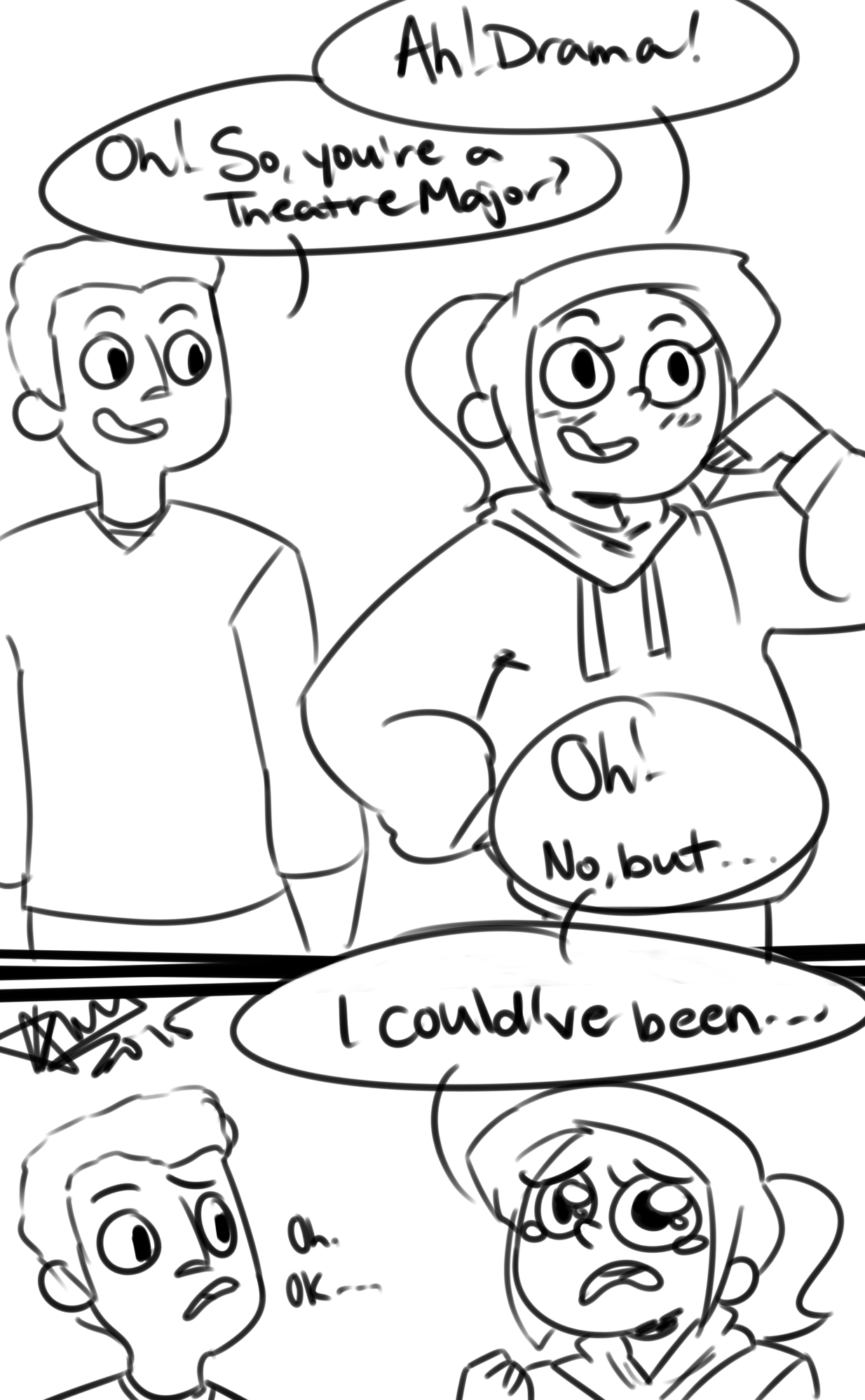 “And sorry I could not travel both and be one traveler.”

I do not think I could say it better than good ol’ Robert Frost did in “The Road Not Taken.”

Do you ever wonder how different life would be if you chose a different path when starting college? If you decided that you did not want to be a mathematics major, and that you wanted to study English instead? Or you chose business instead of creative writing?

It makes me wonder if college helps one follow one’s dreams.

I used to consider that constantly. What would it be like if I could have traveled both paths I originally wanted in college? I could see which one would have been more prosperous, and what would have made me happier.

In high school theatre was my life. I went to a different high school than the one I was originally supposed to go to because the former’s theatre program was very well known.

Instead of spending my evenings at home, I spent my evenings painting sets at long rehearsals.

I started my homework at midnight when I finally got home, and I was constantly skipping lunch to get in extra hours painting and rehearsing.

It was hard to balance the program with everything else you wanted to do, but you were expected to get it all done or you were given a lower grade, or you were kicked out—and for me that would mean changing schools.

Once, I had the flu on the week of the show; I wasn’t in school that week, nevertheless, I still had to go in all day and finish painting. It was really, really difficult.

But I absolutely loved it.

Senior year led to college applications, but for so many of my friends it meant auditions as well. Theatre was not really an option for me; my parents did not see it as a career and I didn’t know if I could handle it. I watched my friends practice monologues, scenes and songs and then go off to their auditions as complete wrecks.

It was something that I knew was completely horrifying to have to do, but I was extremely envious all the same. I did not really know anything else.

My dad was the one that told me to try journalism; but he was not the reason I stayed with it.  I tried it on a whim, along with countless other classes, but my professors cultivated a passion for it in me.

This newfound passion made me realize other strengths I had but never really got to explore because of how immersed I was in the theatre program. I ended up being a good writer, in broadcast and in editorial, and I could not have been more surprised or pleased.

I am taking an English class for fun with Dr. Joseph Colavito, and we recently had a discussion about Frost’s poem “The Road Not Taken.”

I brought up the question if college really helps you follow your dreams, and he said something that tied it all together for me:

With journalism, I am able to do all those things, but get to do them as me, instead of as a character.

I am the one who is imparting that wisdom, not a character that I am playing. If people want to hear me speak or read what I write, then they are doing it because they trust what I am saying or writing.

Although college is a time to focus on a specific major that will lead to a future career, it gives opportunities to explore various talents. I originally thought that instead of helping someone follow his or her dreams, college restricted a student to just one; however, life is too short to wonder what could have been, so take all of those classes and see what else could happen. There is a reason we have the opportunity to double major, minor and even have a concentration.

If I had not tried something new and had not explored my other strengths, then I would not be here writing a column about what I am passionate about. As Robert Frost said:

“I took the one less traveled by, and that has made all the difference.”