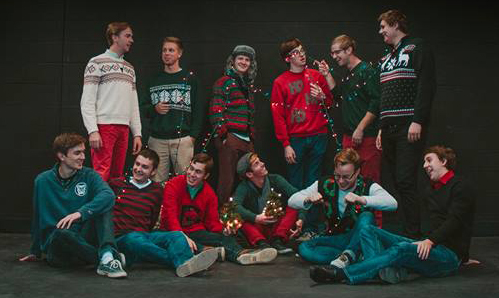 The Howard L. Schrott Center for the Arts was alive with Christmas spirit and the vocal stylings of Butler’s male a capella group Out of The Dawg House last Saturday as the group performed its holiday concert.

The setlist featured “Have Yourself a Merry Little Christmas,” “Happy” and “Good Old A Capella.”

The enthusiastic attendance of students and families was equal to the energy the group presented. The songs exuded energy carried through the entire show.

This was the group’s first performance in the Schrott Center.

However, since its establishment in 2003, Out of the Dawg House has performed at an Indianapolis Colts game, the Super Bowl XLVI Village, Jordan College of the Arts  Rejoice! holiday concerts, and other shows in and around the Butler community.

The organization is completely student-run and managed and holds biannual auditions.

Tanner Walter, a senior business and finance major, has been a member of the group for seven semesters.

“I am not a music major, but I love music,” he said. “Being able to meet three times a week and do something I love has definitely really helped my ear.”

Walter is currently in charge of alumni relations for the group.

Though he works with past members of Out of the Dawg House, Walter said he also wants to build relationships with current members.

The group holds three two-hour practices each week, so the members have gotten pretty close in the time they spend together.

“Several of the alumni in the group will be in my wedding,” Walter said. “It definitely does build really special experiences.”

Daniel Steinbronn, a freshman member of the group, agrees.

He said Out of the Dawg House allows him to feel as if he is contributing more to the group than he would be if he had joined a regular choir.

“It is more unplugged, more upbeat and more dependent on one person, so you feel like you are doing more in the ensemble,” he said.

Together, the group has recorded three albums at The Lodge Recording Studios in Indianapolis.

Its most recent album “Unsupervised” was released in 2012, and the group will begin recording its fourth album January 2015.

“It is a really exciting time for the group,” Walter said. “They have got a lot of good, level-headed people in the group. I would love to see them keep doing what they are doing.”