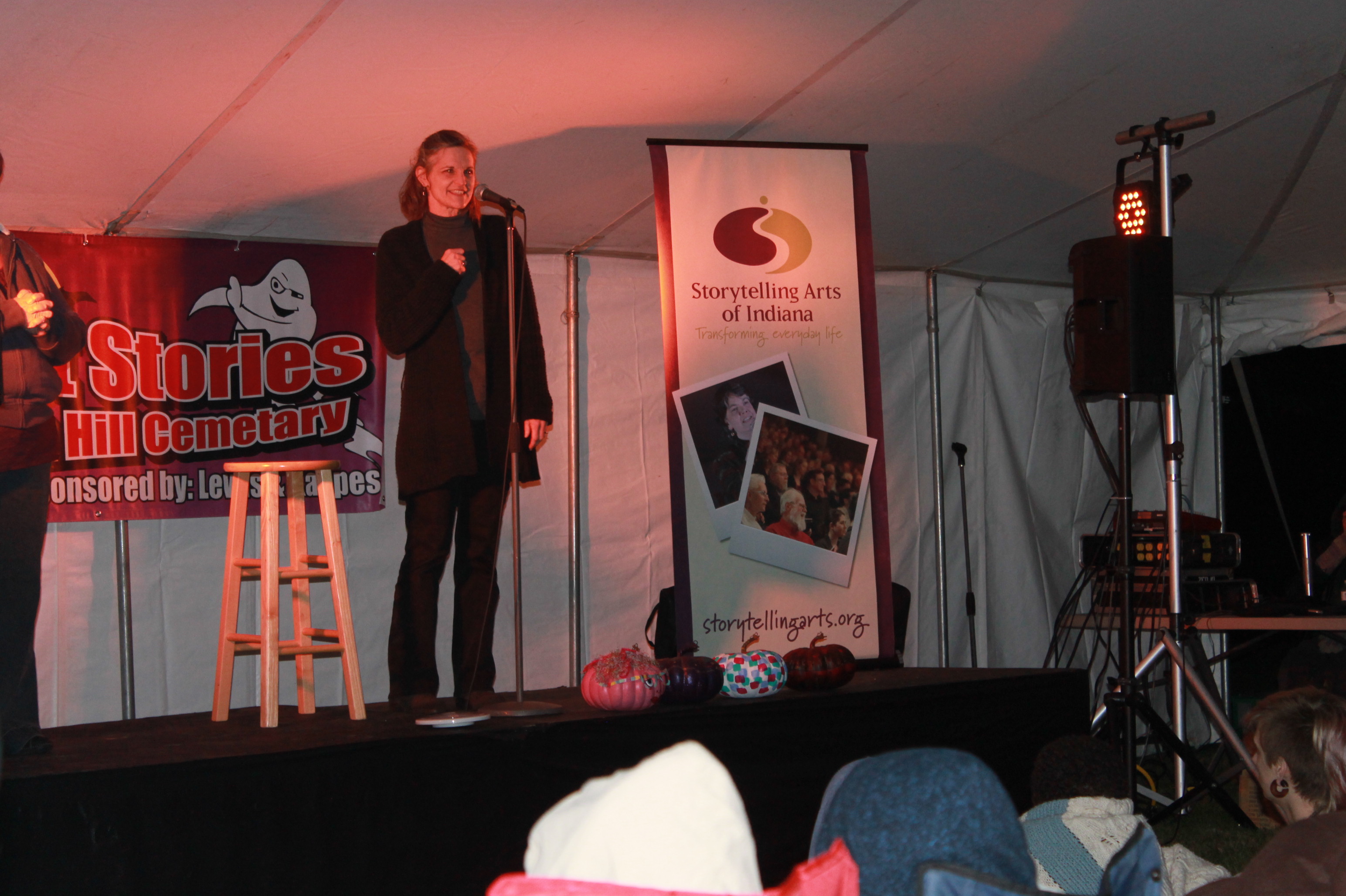 As the half-moon gleamed across the normally quiet cemetery, sounds leapt and bounded off the cold granite and marble, disrupting the peaceful atmosphere.

The crowd gathered at Crown Hill Cemetery for the annual Ghost Stories event cupped their hot chocolates and listened intently to the stories being told.

Throughout the evening, the air grew colder and nipped at the listeners’ skin, but the most faithful stayed until the last story.

Sally Perkins, a public speaking and rhetoric professor at Butler University, ended the night of ghost stories sponsored by Storytelling Arts of Indiana.

She told the tale of an aunt and her nephew exploring the auntie’s childhood home to wrap up the event.

Shifting from the 90-year-old aunt to the nephew in his mid-20s, Perkins morphed her body and her voice to each character.

As the words flew out of her mouth, the audience was captivated and entirely silent, leaving nothing but Perkins’s voice to ricochet off the gravestones.

“The storytelling process is never as easy as just saying a story,” Perkins said.

Perkins is a professional storyteller and won the J.J. Renaux Emerging Artist Grant from the National Storytelling Network in 2013.

“Drawing the picture is fun,” she said. “But it also takes lots of creativity, which, at the start, is really hard.”

Before becoming a professional storyteller, Perkins was simply a listener, just like those in attendance at the Ghost Stories event.

Storytelling actually presented itself to her during a local performance of the chamber orchestra, which featured a reading of the story “Peter and the Wolf.”

She found herself admiring the way the woman reading the story onstage captivated her audience.

“I can do that,” Perkins thought to herself.

When Perkins heard Riley Hospital for Children was in need of volunteers to tell stories, she quickly signed herself up.

She learned quickly that not only would she be reading stories to the children, she would also be telling stories of her own.

Perkins homeschooled her children, which gave her lots of extra practice.

Fortunately for her, she never tells a story she does not like.

“There isn’t a single story I like best, but my favorite ones to tell are ones filled with surprise and laughter, with a hint of wisdom for the audience,” she said.

As a professional storyteller, Perkins’s public-speaking background makes her a credible teacher for speech classes.

“I have taught public speaking much longer than I have been a storyteller, but with public speaking it really doesn’t change much over time,” she said. “Storytelling helped my teaching evolve again to a fresher version. Now I can talk to my students in a different way. I can connect with them because I know the feeling of stagefright. I know how hard and long you have to prepare to make a speech good.”

Perkins also gave insight on how to use the body, as well as the voice, and how to deal with the nerves because she experiences this every time she tells a story, she said.

“The hardest part is getting the motivation to sit down and start, but once you get going, everything falls into place,” she said.