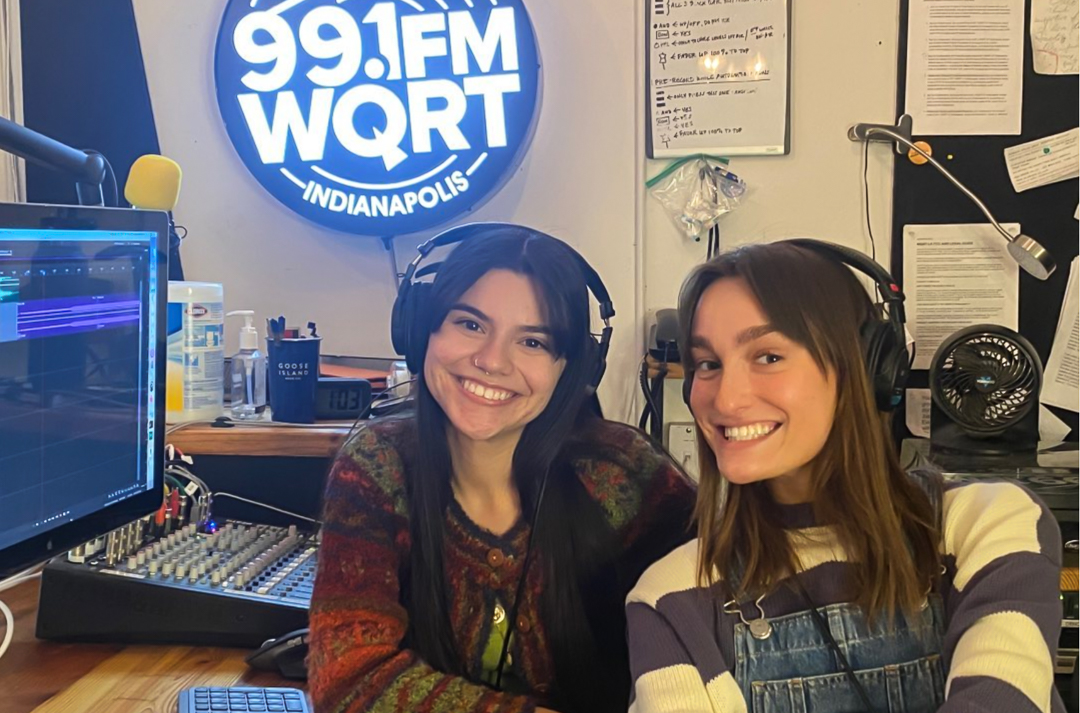 Butler students begin their own radio show on WQRT. Photo courtesy of thebside.fm on Instagram.

Disclaimer: Katerina Anderson is a Collegian staff member and therefore could not be interviewed as a conflict of interest

WQRT’s new 99.1 show, The B-Side Radio, features a variety of genres and new music for students, by students.

A local radio station focused on contemporary art and community, WQRT is giving Kyndal Sagarsee, a junior strategic communication and creative media and entertainment double major, a platform to live out her radio show dreams.

Sagarsee, who is one of the two Butler students working on the show, said she has been looking into starting a radio show to play music since last year.

“I really wanted to get Butler’s campus radio back, just because I know a lot of college campuses have a radio station,” Sagarsee said. “ I reached out to a couple of professors and then shared my idea with a fellow student, Katerina Anderson.”

However, due to issues of funding and copyright revolving around Butler’s former radio station, Sagarsee said she had been looking at other options near campus.

Radio has traditionally existed at Butler, with WAJC becoming the city’s first nonprofit educational radio station in September 1950. However, in 1993, the Butler administration shifted funding to television and sold the station to Susquehanna Broadcasting for more than $7 million.

There has been regular interest in bringing back Butler radio in the past, though nothing has been able to get off the ground due to issues of funding.

Sagarsee and Anderson settled on a studio located about 20 minutes from campus, Listen Hear. The building doubles as an art gallery — featuring exhibits and shows of multiple artists. Although she hasn’t done anything in this realm before, Sagarsee has had a passion for music all her life.

“I’m super big into making very specific Spotify playlists and stuff like that,” Sagarsee said. “In my sorority, my friend Gab Peabody [and I] host a music club, which is where everyone who joins talks about their newest favorite music. It’s the love for talking about music and finding new stuff that not everyone’s heard [that] is really fun for me.”

Gab Peabody, a junior art and strategic communication double major, said that their music club is also a chance to talk about what music means to them. As one of her best friends, Peabody said she is proud to see Sagarsee pursuing her passion for music.

“I think people should listen in to the show because it’s a great opportunity to learn more about music and support Butler [students] who worked so hard to get the show running,” Peabody said in an email to The Butler Collegian. “It was hard for [them] to find a station to allow her to do this but that did not deter her. I’m sure this attitude will continue as she continues to pursue this project.”

Sagarsee said that currently, the station is focused mostly on playing music, but she and Anderson hope to venture into song discussion and having guests in the future.

“It’s just us two right now, but we definitely want to feature local artists or even Butler artists … ” Sagarsee said. “For the first episode, I’m including one of my good friends’ original songs, who also goes to Butler.”

Caroline Wenokur, a junior strategic communication major, said that she is excited to hear a diverse line-up of songs. As one of her best friends, she said Sagarsee is always sharing and looking for new music.

“If Kyndal wants to do something, she’s gonna find a way to get it done,” Wenokur said. “She’s really motivated and super creative. Kyndal also has super extensive knowledge of different artists and genres and you can tell how much she loves sharing music.”

Sagarsee said that one of her major musical influences is her dad, who showed her everything from the Beastie Boys to Fiona Apple. She hopes to engage students as well and currently has a page for song requests.

“I think a lot of the stuff that’s on the radio right now is kind of boring,” Sagarsee said. “I like locally run shows because it digs deeper into all genres of music, which is really cool and we don’t stick to anything specific. We play all different decades, genres, stuff like that.”

Sagarsee and Anderson’s show will air at 6 p.m. on Fridays. You can listen to it on WQRT’s 99.1 or on their website. You can also follow their journey on Instagram or Spotify.