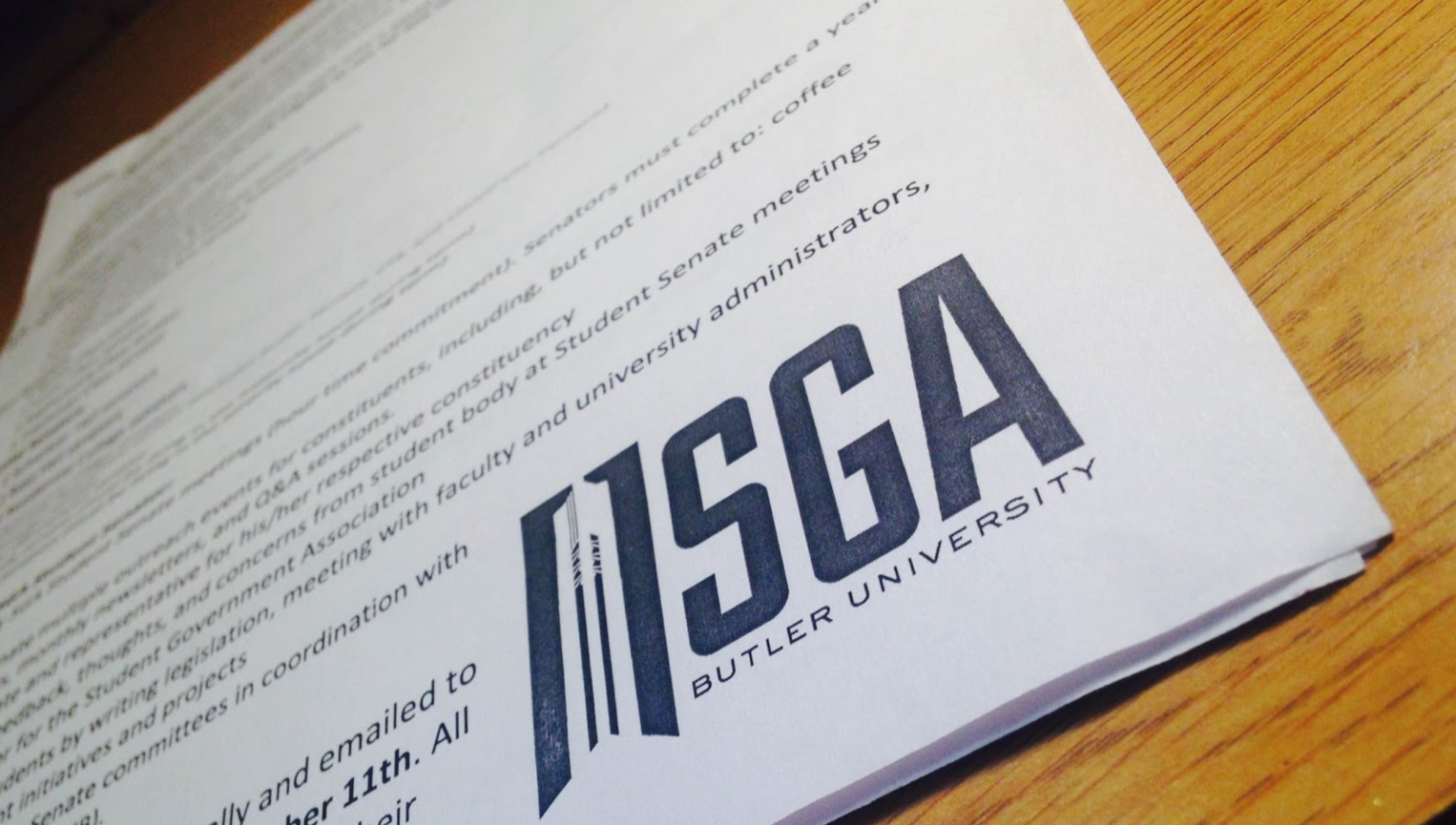 Cade Chezem, Student Government Association president, delivered the state of the student body address during SGA’s weekly meeting. He reviewed the list of accomplishments the SGA was responsible for, which include the donation of half the cost for the new Dawg ride van, providing menstrual products in women’s bathrooms throughout campus and providing students with snacks and hot chocolate during finals week.

Chezem has been having meetings with Butler University President James Danko, Vice President of Student Affairs Frank Ross, as well as the Board of Trustees, where he gives weekly updates and engages in conversation about student life on campus.

This semester, Chezem said he wants to continue working towards his goals of improving student life, revitalization and holding the university accountable.

Chezem is aware his presidency is coming to a close; however, he still continues to be an active leader in SGA.

“We have less than 100 days left in office, and it’s kind of scary to me,” Chezem said. “But we had a retreat [on Jan. 21], and I wanted to make sure that we are all on the same page of what we’ve done and where we’re going.”

One project that Chezem is pursuing is the revamping of Atherton Union. Chezem said that he explored other student unions at multiple Indianapolis colleges, and noticed the variety of activities and resources their students have access to — such as study rooms, lounge rooms, game rooms and restaurants. He wants to utilize empty spaces in Atherton for more student spaces to make Atherton a more active student union. Chezem stated that he aims to turn the former commuter lounge into a game room with a pool and ping pong table.

Chezem also said that beyond providing services for students, Atherton needs to be redecorated to create an atmosphere that is more welcoming to students.

Beyond Butler’s campus, SGA also plans to continue helping the Indianapolis community. Tomi Clark, a senior health sciences major and director of student engagement, wants to continue partnering with different organizations in Indianapolis to contribute resources that would benefit individuals outside of the Butler bubble. Clark is arranging a fundraiser with Indy Humane on Valentine’s Day where SGA will host rescue animals on campus for students to play with, as well as hosting a donation drive for the shelter.

One thing Chezem aims to continue addressing is the stigma surrounding SGA and elitism. He said that he hopes having face-to-face conversations with students will ease tensions.

Yet, Chezem said that progress only starts with free items. He then wants to transition into more opportunities for student feedback.

“I wanted to be sincere,” Chezem said. “I’m all about giveaways … But at the end of the day, I think students want to hear somebody, see somebody who wants their feedback and who’s going to act on their feedback. Someone who deeply cares about your well being and improving Butler.”

Clark is starting Feedback Fridays, where students can send input through the SGA Instagram. She also planned a Breadsticks and Discount Cards Outreach event on Thursday, Jan. 26 from 12:30 p.m. to 2:30 p.m. in Starbucks.

This spring, SGA will hold its annual election. This will include the election of student body president, senators and various director positions. The applications to apply will open Feb. 27 and close on March 12. Election day will be March 28.

“We’re hoping to have a really high turnout for elections and have a lot of different candidates,” Crnarich said. “We want to make sure people are not currently scared, and that they feel welcome and comfortable in running for office as well.”

According to Speaker of the Senate Reagan Markland, a senior marketing and entrepreneurship double major, every year, the election oversight commission readjusts the election guidelines to improve the rules to ensure that everyone who wants to run has an equal opportunity to do so.

In the SGA meeting on Wednesday, Jan. 18, the election commission presented these changes. On Feb. 1, the commission will present the rules again, and there will be a vote on whether or not they are approved.

Candidates would also be prohibited from posting about their campaign on their personal main social media accounts. They must create a new account dedicated to their campaign, and in the first revision, the election commission stated that candidates could not repost on their main account. However, since taking feedback from other SGA members, the new revisions state that candidates can now repost their election posts on their main account’s story.

Amelia Ball is a senior political science and international studies double major, as well as election chair. She stated these revisions are meant to “level the playing field” for all candidates, no matter how much perceived popularity they have on social media.

Ball also said that she wants to see a variety candidates this year to expand SGA’s school of thought.

“I’d really like some people that are not used to the status quo in SGA,” Ball said. “I want to ensure that if other people have good ideas, that those are represented as well, because this is an organization that is for students.”