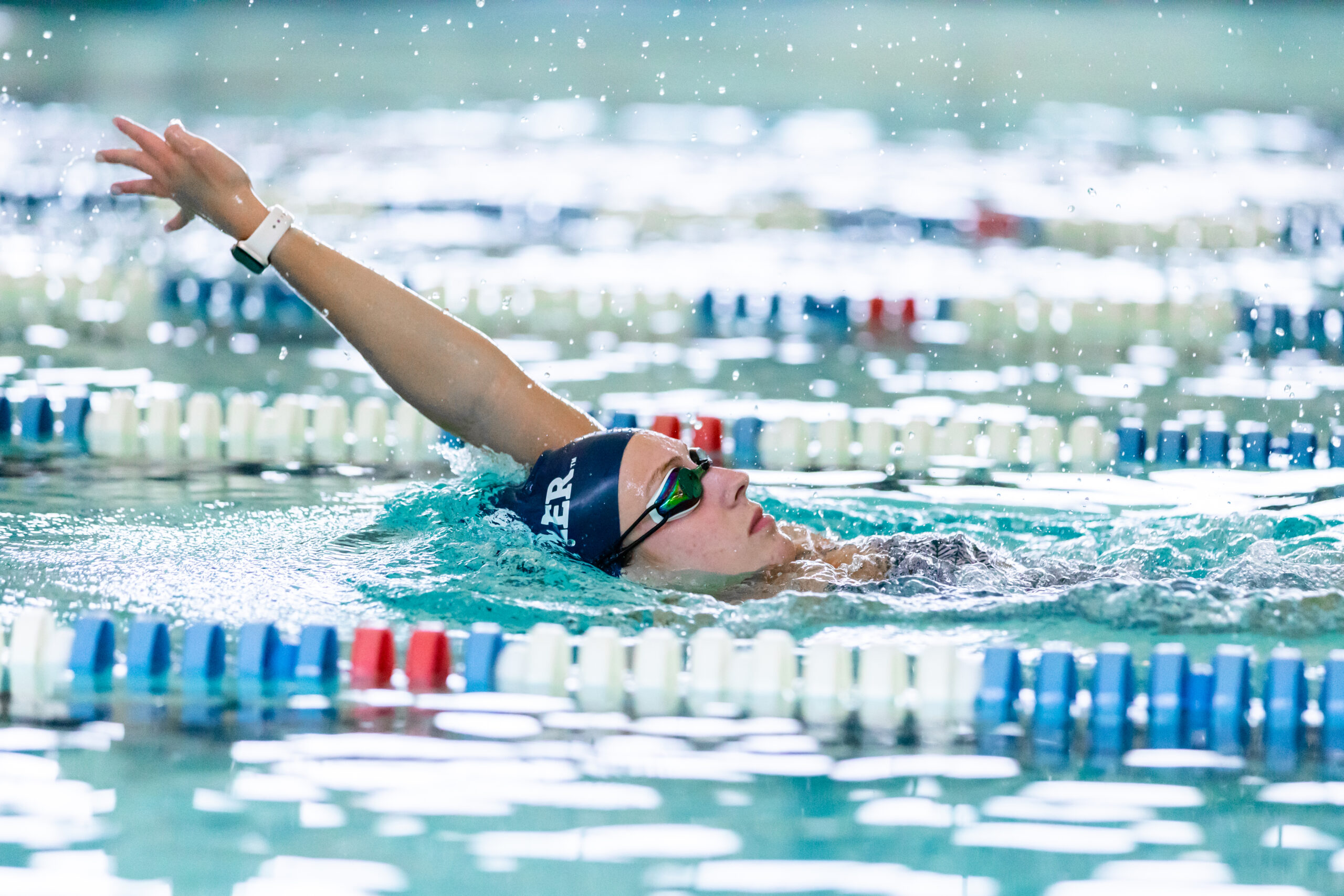 The Butler women’s swim team fell to St. Louis in their opening meet on Sunday, Jan. 15. Photo by Lauren Gdowski.

The Red Storm’s pressure defense stopped Butler resulting in a 77-61 loss for the Bulldogs. Junior Chuck Harris led the Bulldogs with 17 points followed by sophomore Simas Lukosius with 15 points, but that was not enough to keep up with the Red Storm. The team let many of their points slip away with 22 turnovers, their second most of the season. This dropped the Bulldogs’ record to 10-8 and 2-5 in conference play.

The Bulldogs won their second conference game 72-48 against the Hoyas. Junior Kendall Wingler scored a career-high 23 points for the Bulldogs. The team was able to connect as they moved down the court, shooting 50% from the field. To add to their success the team shot 54% from 3-point range and was 7-for-7 from the foul line. At halftime, Butler led Georgetown 34-23 and was able to continue this momentum into the second half. The Bulldogs’ record moved to 7-10 and 2-6 within conference play.

Butler was back in Hinkle Fieldhouse where they put an end to their two-game losing streak with a win of 79-71 against the Wildcats. Fans brought energy throughout the game adding to the Bulldogs’ success. Sophomore Simas Lukosius led the Bulldogs with a career-high 28 points. Defensively, Butler was able to stop Villanova from getting to the hoop forcing 15 turnovers for the Wildcats. Butler led by 10 at the half which Villanova responded to by coming out in the second half gaining a 46-41 lead. Butler regained their momentum and ran with it taking their final lead with 4:54 left to play. Butler improved to 11-8 and 3-5 in conference play.

The men’s team started their season on a high note with a win against the University of Illinois Chicago 4-3. The Bulldogs took their wins in four of their singles matches. Both senior Thomas Brennan and senior Alvaro Huete Vadillo won in straight sets while senior Borja Miralles and freshman Nicolas Arts won in three. As for doubles, UIC won two out of the three matches, where they gained most of their points.

The Bulldogs fell to the Bluejays 75-56. Throughout the game, Creighton had multiple 7-0 runs pushing their lead farther and farther from Butler. Sophomore Sydney Jaynes led Butler with 16 points, five assists and three rebounds, but it wasn’t enough to keep up with the Bluejays. This dropped the Bulldogs’ record to 7-11 overall and 2-7 within the Big East.

Western Michigan swept Butler 7-0. Senior Borja Miralles and Michael Karr came close to winning their doubles set but fell 7-5. Senior Zach Trimpe put up a fight in his singles match with a tiebreak in the first set, but it wasn’t enough to hold onto a win.

After two days of competition, the Bulldogs ended with some outstanding performances across the board at the Rod McGravy Memorial. Senior Jack McMahon placed first in the 3000 meters with a time of 8:11.19. Following right behind to take second place was junior Will Minnette with a time of 8:11.97. Both were new personal bests. In the women’s 3000, junior Abby Olson took second with a time of 9:46.31, a new lifetime best as well. On the field side, junior Drew Herman placed third in the men’s high jump for the second week in a row and graduate student Joey Gareis placed sixth in the men’s long jump for a new personal best. The team travels to the Gladstein Invitational at Indiana University from Jan. 20-21.

The women began their season at home with a 4-3 loss against Cincinnati. The singles matches were split right down the middle with the Bulldogs taking three of the six wins keeping the score close. Junior Natalie Boesing and freshman Chase Metcalf won their doubles match 6-3 while the other two matchups were won by Cincinnati.

The Bulldogs had some successful finishes against Saint Louis. In the relays, junior Emily Landwehr helped her team earn a pair of second-place finishes. Individually, freshman Kate Schilling won the 200 IM at 2:10.22 and sophomore Alani Hightower-Bend took home the crown in the 50 Free at 24.79. Despite these finishes, Butler fell to Saint Louis 61-160.

The Bulldogs lost 0-4 to Indiana bringing their record to 0-2. Indiana won their three singles matches and two doubles matches in straight sets. The Bulldogs will head to Notre Dame next for an in-state showdown on Saturday, Jan. 21.

The men’s team swept IUPUI 7-0, moving Butler to 2-1. In the singles match, seniors Thomas Brennan and Alvaro Huete Vadillo won their singles matches in straight sets. Brennan and Huete Vadillo also were able to pull out a win in their doubles match 6-3. Seniors Borja Miralles and Zach Trimpe both had matches that went into the third set, but were both able to come out on top. The Bulldogs will host their home opener against Youngstown State on Friday, Jan. 20.

After a close first half the Bulldogs could not keep up with the Bluejays ending with a loss of 52-37. In the first half Butler kept pressure on Creighton stopping them multiple times at the hoop.The Bulldogs came within two points of Creighton in the first half, but this didn’t last long as the Bluejays gained momentum. While shooting percentages were below 50% for both teams, Creighton had 47 rebounds whereas Butler only got 25. The Bulldogs have some work to do before they head to UConn on Jan. 22.