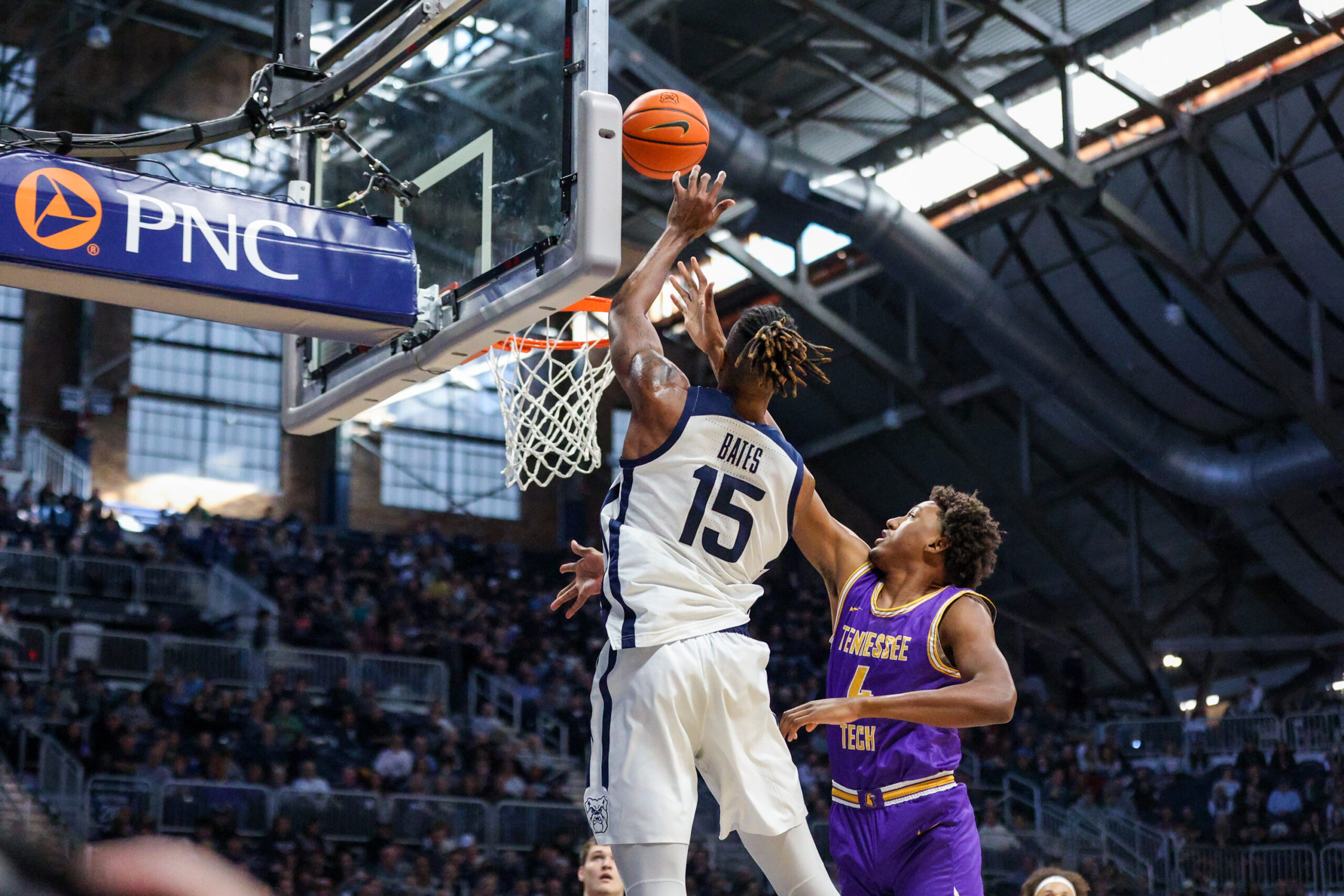 Manny Bates is averaging 14.1 points and 7.3 rebounds per game on the season. Photo by Claire Runkel.

The Butler men’s basketball team defeated Yale 71-61 at Hinkle Fieldhouse to move to 7-3 on the season. Butler led for all 40 minutes of the game and ran a short rotation with only six guys seeing the floor.

Graduate center Manny Bates led all scorers with 22 points and grabbed seven rebounds on the night. Sophomore guards Jayden Taylor and Simas Lukosius each scored 14 points. Graduate guard Eric Hunter Jr. added 11 points to round out the double-figure scorers for the Dawgs. All six players for Butler pitched in with either a steal or a block on the defensive end. Hunter Jr. led the team with four steals and plus/minus at +16.

Yale was led by senior EJ Jarvis and sophomore Bez Mbeng with each scoring 14 points and knocking down six shots from the field. Junior August Mahoney had nine points all on three-pointers. Junior Matt Knowling came into the game as Yale’s leading scorer but was held to six points.

Let’s go beyond the box score to unpack the quality win over Yale.

For the man that played almost the full 40 minutes, Manny Bates did not appear to be fatigued and was dominant in the paint all game. Bates made 9-15 shots from the field and all four of his free throw attempts. In the second half of the game, he took over and scored 14 of his 22 points. Bates discussed the importance of extending his shooting range for how opposing defenses guard him.

“I feel like it’s starting to allow or let defenses know that I am not just an inside threat,” Bates said. “I can shoot a little bit more and I feel like that’s gonna stretch the floor out even more as we go into Big East play.”

Bates hitting mid-range jumpers and being dynamic in the paint has been helped by the shooters that are surrounding him. Bates also emphasized how he has to find the right balance between being aggressive and passing out of the double team.

“We practice a lot on me being patient in the post,” Bates said. “As soon as I catch the ball, I gotta look and see how the defense is playing me. If they’re not coming to double, then I can go to work, if not I’m trying to find somebody open on the wing.”

Bates has now played at least 39 minutes in each of the last three games. So far it has not seemed to affect his play on the court with him continually scoring in double figures. With players such as Myles Wilmoth and DJ Hughes eventually working back in the fold, look for them to eventually help Bates get some much-needed rest down the road.

Shooting the lights out

A strength so far for the Bulldogs this season has been their shooting. This game’s 50% performance from the field was the seventh time that the team has hit that shooting mark. Also, the team has shot at least 40% from three in six of the games and 50% from three tonight was the third game of reaching that figure.

A big component of hitting these numbers is staying engaged on both ends of the floor and being able to remain out on the floor. Throughout the season, Coach Thad Matta has mentioned that he has been wanting to see a complete game from his team. Matta felt that this game was a reflection of what his team has been ten games into the season.

“What these guys are doing right now with the minutes that they’re logging and sort of the stretch we’ve been on is a testament to them and their toughness, “ Matta said. “We’ve gotta keep building, we gotta get healthy and get more bodies so we can run at it.”

Butler will take their three-game winning streak on the road against the California Golden Bears on Dec. 10. This will be the first matchup between the two teams in what will be a home-and-home series that will be completed at Hinkle Fieldhouse during the 2023-24 season. The Bulldogs are 15-11 all-time against current Pac-12 teams.