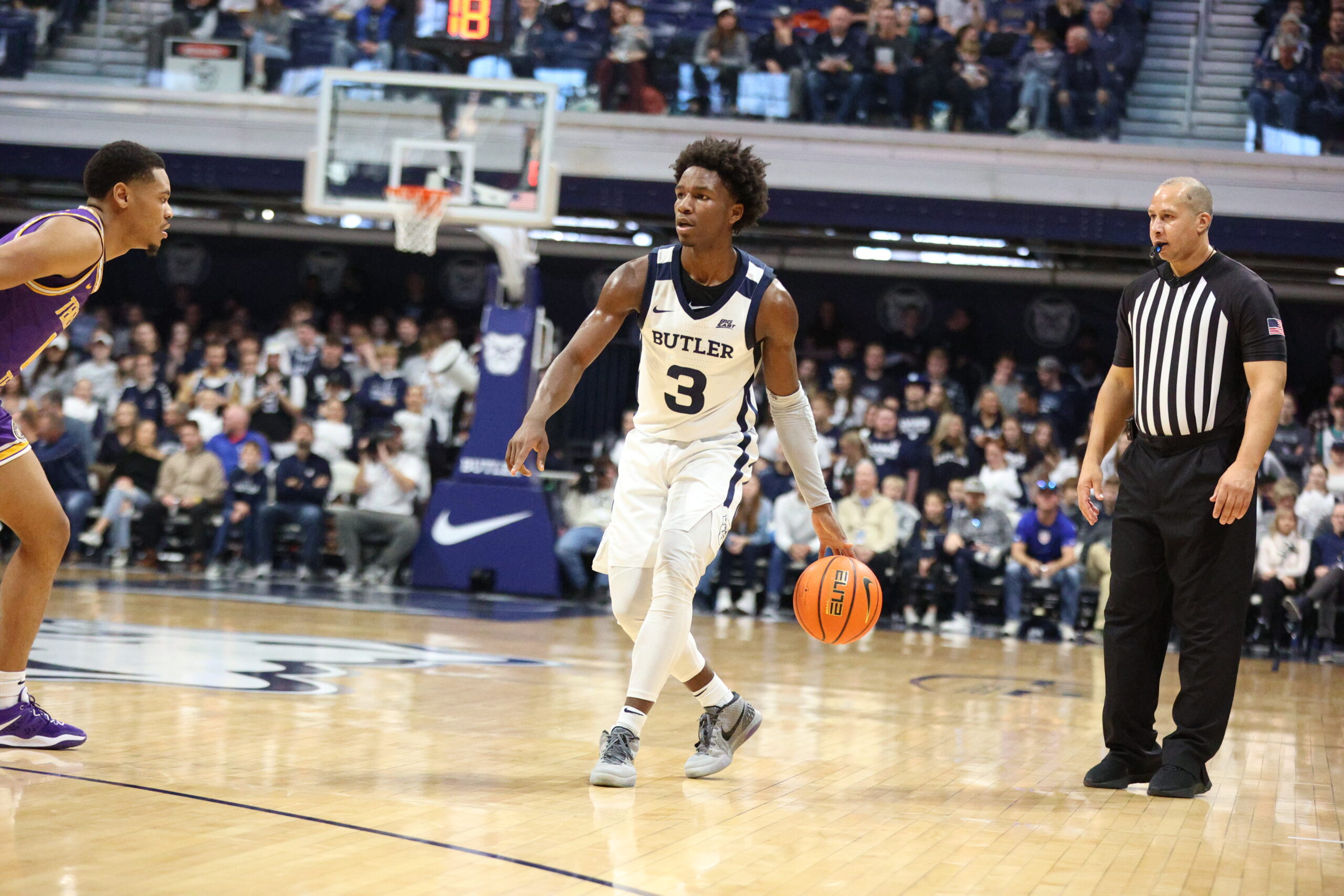 Junior guard Chuck Harris played all 40 minutes and scored 32 points in the win against Tennessee Tech on Dec. 3. Photo by Claire Runkel.

The Butler Bulldogs defeated the Tennessee Tech Golden Eagles 80-66 inside Hinkle Fieldhouse to move to 6-3 on the season. The Bulldogs will close out non-conference play with two more games in the span of a week.

Tennessee Tech was led by junior Jayvis Harvey who had 16 points on an efficient 7-10 performance from the field. Graduate Ty Perry chipped in 14 points and junior Nolan Causwell scored 12 points and grabbed five rebounds.

Let’s go beyond the box score to unpack the win against the Golden Eagles.

Throughout the game, it was evident that Chuck Harris was feeling good about his jump shot. Harris shot 10-16 from the field and 6-8 from the three-point line. He was aggressive from the start of the game and had already hit 17 points by halftime. Harris acknowledged that he was feeling good coming into the game.

“I was going through my routine before the game and everything just felt perfect almost,” Harris said. “ So coming into the game, I ain’t expect it to happen, but I knew when open shots came I was gonna hit them.”

Harris’s performance was even more impressive considering he played all 40 minutes of the game along with Bates. Harris explained that he was not tired and was focused on finishing out the close game.

“I’ll probably feel it later today,” Harris said. “ But in the heat of the moment, during a close game I was just trying to finish the game.”

This game is the third straight game that a Butler starter has played all 40 minutes. Harris has now gone the distance in two of the previous three games. Minutes should continue to be monitored with conference play on the horizon and the rotation still down a few players.

Points in the paint

For all the things that the Dawgs did well in this game, defense — especially in the paint — was not one of them. In the first half, the Golden Eagles scored 24 points in the paint and had nine second chance points off of eight offensive rebounds. Head coach Thad Matta gave credit to the Golden Eagles offense, but was disappointed by his team’s effort on the defensive glass.

“They run a very unique offense,” Matta said. “ Those guys are cutting well when they cut and  the shot goes up, you have to go find your guy and get him out of there. We didn’t do a good enough job of that.”

The Bulldogs must find a way to continue to weather the storm and keep fighting on the defensive end, even with tired legs. Once Big East play begins, the team will need to be at their best on both ends of the floor.

Butler’s next game will be at home on Dec. 6 against the Yale Bulldogs. Butler will look to remain undefeated at home where they are currently 5-0. The Dawgs will enter the matchup 69-2 over their last 71 non-conference home games.