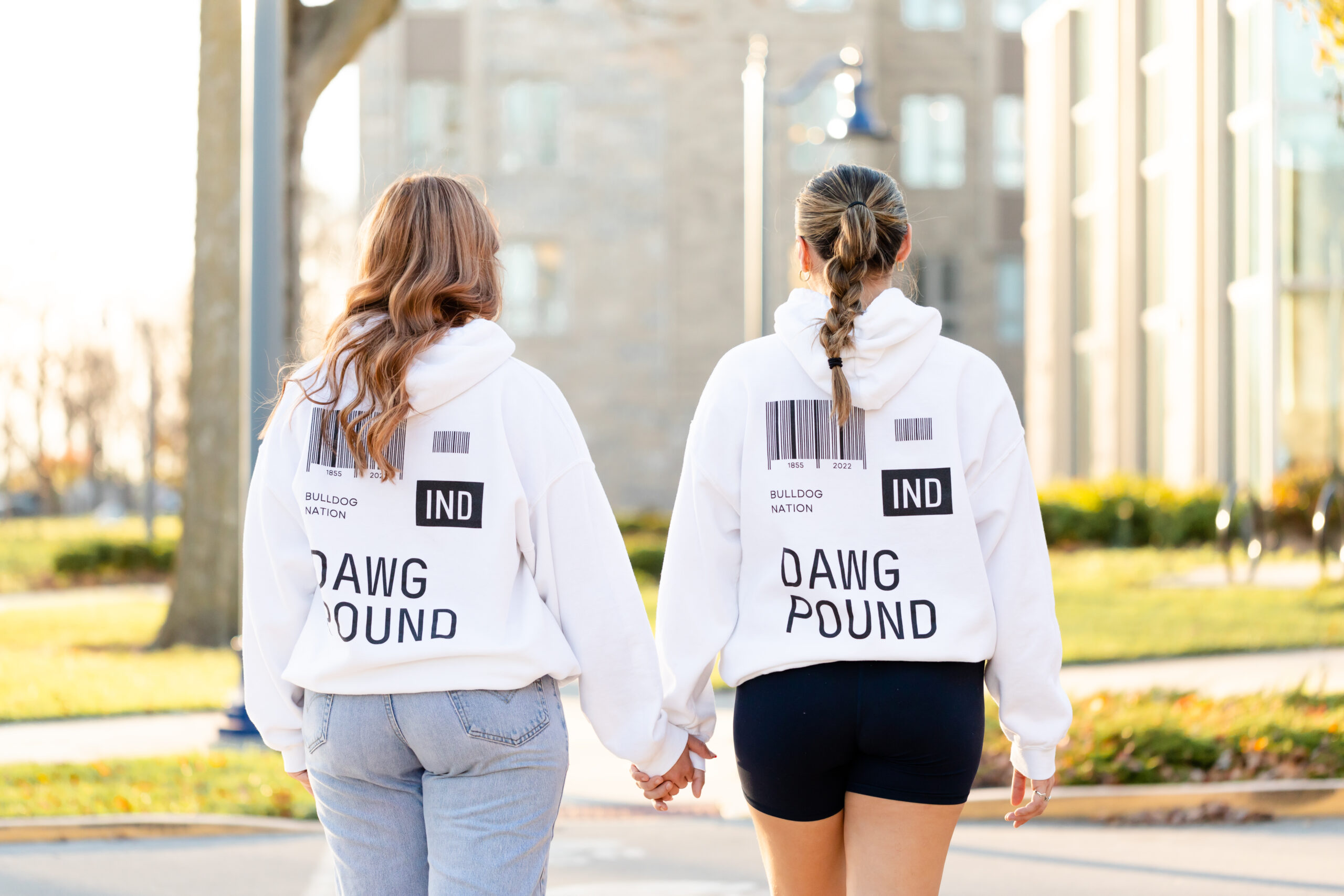 Sunset Avenue Clothing Co. started out as a Real Business Experience, or RBE, project during the fall 2021 semester. Following a successful semester of profits, the business continues to design clothes that can be seen around campus.

The company, which is now run by junior marketing major Isa Sanchez and senior pharmacy major Moni Krasteva, began selling merchandise that was different from the typical bookstore apparel.

The “Wish you were at Hinkle” hoodie put the company on the map. The company’s success as an RBE project fueled subsequent  “drops” of merchandise, and even a pop-up shop in collaboration with Pattern Magazine.

Most recently, Sunset Avenue Clothing Co. collaborated with the Dawg Pound and released yet another successful line of sweatshirts. The white hoodies were given to members of the Dawg Pound. They feature a design of a barcode and “Bulldog Nation” on the back.

The one year anniversary of the company coincided with the release of their Dawg Pound collaboration, and the clothing company has plans to continue their business.

“Since there was such a high interest in the first giveaway that we did with Dawg Pound, we’re considering maybe doing a drop where we are accepting pre-orders so that it’s not just limited to those Dawg Pound members,” Krasteva said.

The success of Sunset Avenue Clothing Co. shocked Krasteva and Sanchez, and they are happily surprised that the company has continued to thrive.

“If you asked us a year ago, in RBE, if we thought we’d still be running this a year later with Dawg Pound that would have never happened,” Sanchez said.

The company hopes to spread messages of love for the Butler and Indianapolis communities, and they hope to continue to spread positivity through their clothing lines.

“Within our line of Butler spirit gear and our Indy spirit gear, I think it has definitely been more of a push towards how we encompass Butler basketball and the Indianapolis community in general,” Sanchez said.

Their original business model ran solely on pre-orders for their clothes. Their model has changed slightly, and they are now contracting with Dawg Pound, and are getting paid for the design of the clothes.

This business model has helped the two current students continue to run their business, while still being able to complete their studies.

“Scaling down from running our own business where we’re selling it ourselves, versus designing for an organization and having them pay us, has been a huge help to us just because we’re still able to run the company and be behind the brand without putting so much work into it,” Sanchez said.

The company made $7,000 in their first semester in revenue, most of which was put back into the company to cushion them for future drops.

Caroline Smith, current RBE student and sophomore finance major, said that the success of the company is what every RBE group hopes to achieve.

“They have become a company that everyone talks about in our RBE class as an example of what we want our RBE groups to become,” Smith said. “When I heard that Sunset Ave was making Dawg Pound sweatshirts, I immediately wanted one without even knowing what the design was yet. They created amazing products in the past, and I knew their Dawg Pound sweatshirt would be the same.”

The Sunset Avenue Clothing Co. presidents hinted at a potential drop in the near future, continuing their successful business, and giving students apparel options that cannot be found in the bookstore.