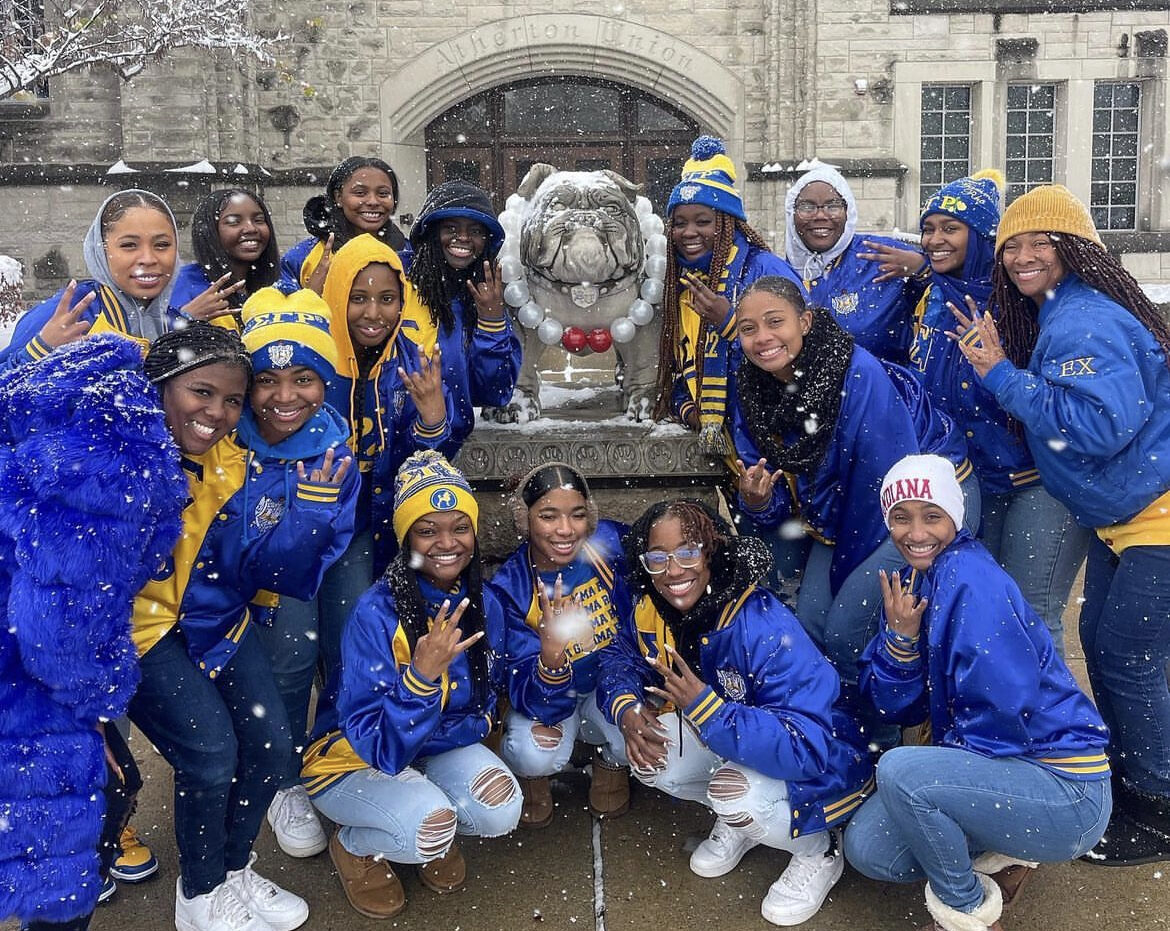 “When I say ‘happy,’ you say ‘centennial.’” It was a celebration like no other as the women of Sigma Gamma Rho Sorority, Inc. counted down to midnight to celebrate the sorority’s 100th anniversary on Nov. 12. The “Where It All Began” event was just one of many over the weekend that commemorated not only the centennial, but the seven women who started the sorority on Butler’s campus 100 years ago.

The weekend of festivities kicked off on Nov. 11 with a street dedication ceremony. Boulevard Place between 49th Street and 52nd Street was officially named Sigma Gamma Rho Sorority Inc. Way.

Senior Spanish major Michaela Ivory, president of the ALMIGHTY Alpha chapter at Butler, said she is proud of the decision she made to join Sigma Gamma Rho and continue the legacies of the founders. She said the street dedication solidified the sorority’s presence at Butler.

“I mean, as if being founded here weren’t enough, it’s really meaningful to know that the university and the city of Indianapolis are taking our existence seriously, and that they’re honoring that,” Ivory said. “So for this street dedication ceremony to occur the day before we turn 100 years old, I will forever remember this as one of the best moments in Sigma Gamma Rho’s history. And we’re only going up from here.”

Maggie A. Lewis is the majority leader of the city-county council and has been a member of Sigma Gamma Rho since 1993. She sponsored the name change and said she was honored to help get it approved.

“I hope that people ask the question when they see Sigma Gamma Rho Sorority way,” Liberty said. “I hope they ask, ‘What is that? Let me do some research on that,’ and find that we are an organization that is building professional women to serve — basically grow and sow in the community. We are an organization that brings you in and grows you but also creates a vehicle through you to sow into the community in which we serve. And that’s what the foundation is, that’s what our seven founders did, and I want people to remember them as really the entity in the vision that made this all come to pass.”

That night, over a thousand sorors, meaning sorority sisters, and guests gathered in Clowes Memorial Hall and stayed until midnight to mark the 100th year of their founding on Nov. 12, 1922.

People traveled from all over the country to be in Indianapolis for the momentous occasion. Ieesha Johnson traveled from Maryland. She originally joined the sorority at California State University, Long Beach in 1998. She said celebrating the seven founders was an important part of the weekend.

“When [our founders] founded this sorority back in 1922, it was during a time where Black women weren’t allowed to do much on campus, and the fact that they founded this organization built upon service and community, I couldn’t not be here to see all these women from different professions around the world join together to celebrate seven women [who] are no longer here, but still a special part in our history,” Johnson said.

Dr. Khalilah Shabazz is Butler’s vice president and chief diversity officer, Sigma Gamma Rho’s International Grand Anti-Grammateus and the great-granddaughter of founder Vivian Irene White Marbury. She officially became a member in 2013 but said she has felt like a member all her life because her great-grandmother raised her steps from Butler’s campus.

For Shabazz, working at Butler and celebrating the centennial was a full circle moment.

“I nearly get emotional every time I think about it,” Shabazz said. “Because now when I drive on campus, I’m driving on campus with a renewed purpose of what it means to be a member — literally walking in the footsteps of my great-grandmother who trailblazed on this campus. And now it’s like the torch got passed to me to keep carrying and making sure it stands strong.”

Danny Kibble, executive director of advancement for diversity, equity and inclusion initiatives and family philanthropy, has helped Butler coordinate the centennial plans for the past five years. He emphasized the importance of the history Butler and Sigma Gamma Rho share.

“What I love most about this event is Butler is embracing the important role and the strong historical bond that the two organizations will forever be linked together,” Kibble said. “It has been important, and I’ve been thrilled to see how Butler University as an entire community has embraced the centennial.”

Molly Q. Ford traveled from Oakland, California and joined Sigma Gamma Rho in 1992. She is the president of her local chapter and grew their membership in anticipation of the centennial.

Ford also said the bond between Butler and Sigma Gamma Rho is special.

“I think we all have a Butler T-shirt even though we live someplace random, so I just thank you all for hosting us and welcoming us,” Ford said. “We went to breakfast the other morning, and we walked in the restaurant in our paraphernalia and our colors, and people started clapping and saying, ‘Thank you for what you bring to Indy,’ so I think we have something special here that we can really call Indy Sigma Gamma Rho’s home.”

On Friday night, the sorority debuted a documentary chronicling the events of the past 100 years. It celebrated the founders who faced extreme adversity — walking by Klu Klux Klan members to get to meetings — and talked about the legacy of the sorority as it stands today and what it hopes to accomplish in the future.

Porsha Knapp, who joined Sigma Gamma Rho in fall of 2008, traveled from Chicago, Illinois for the centennial. She said she hopes to see the sorority continue to progress and expand on their mission and slogan of “Greater Service, Greater Progress.”

“I want us to keep thriving and keep leading the way and keep being trendsetters and being the ones that come up with things and do things differently, breaking the mold, and not following along with what we see everybody else do,” Knapp said. “I feel like that’s something we’ve done, and I want us to continue to do that.”

Nov. 12 was the national centennial day of service where sorors participated in local community service honoring female veterans. There was also a memorial service for the seven founders at Crown Hill Cemetery followed by a rededication ceremony, a day party downtown and the centennial gala that night. The weekend ended with a unity brunch the morning of Nov. 13.

For many women, the weekend was an opportunity to see their fellow sorors and celebrate the bond of sisterhood they all share.

Patrice Campbell traveled from Atlanta, Georgia. She became a member in 1992 and was part of the centennial planning committee.

“I am fortunate to, like I said, join in San Diego, which is the western region, but I now live in Atlanta, which is the southeast region, and I have to say the sisterhood is consistent in both regions,” Campbell said. “And I’ve traveled to other regions and felt the same love, so it’s not a regional thing; it’s a Sigma Gamma Rho thing, and I’m privileged to be a member — honored.”

Tushunda Wright lives in Charlotte, North Carolina, but traveled with her friend Knapp from Chicago. She said it would not have been right to be anywhere except Indianapolis to celebrate the centennial.

“This is a once-in-a-lifetime experience,” Wright said. “To see us all gather like this has just been heartwarming and ‘bluetiful.’”