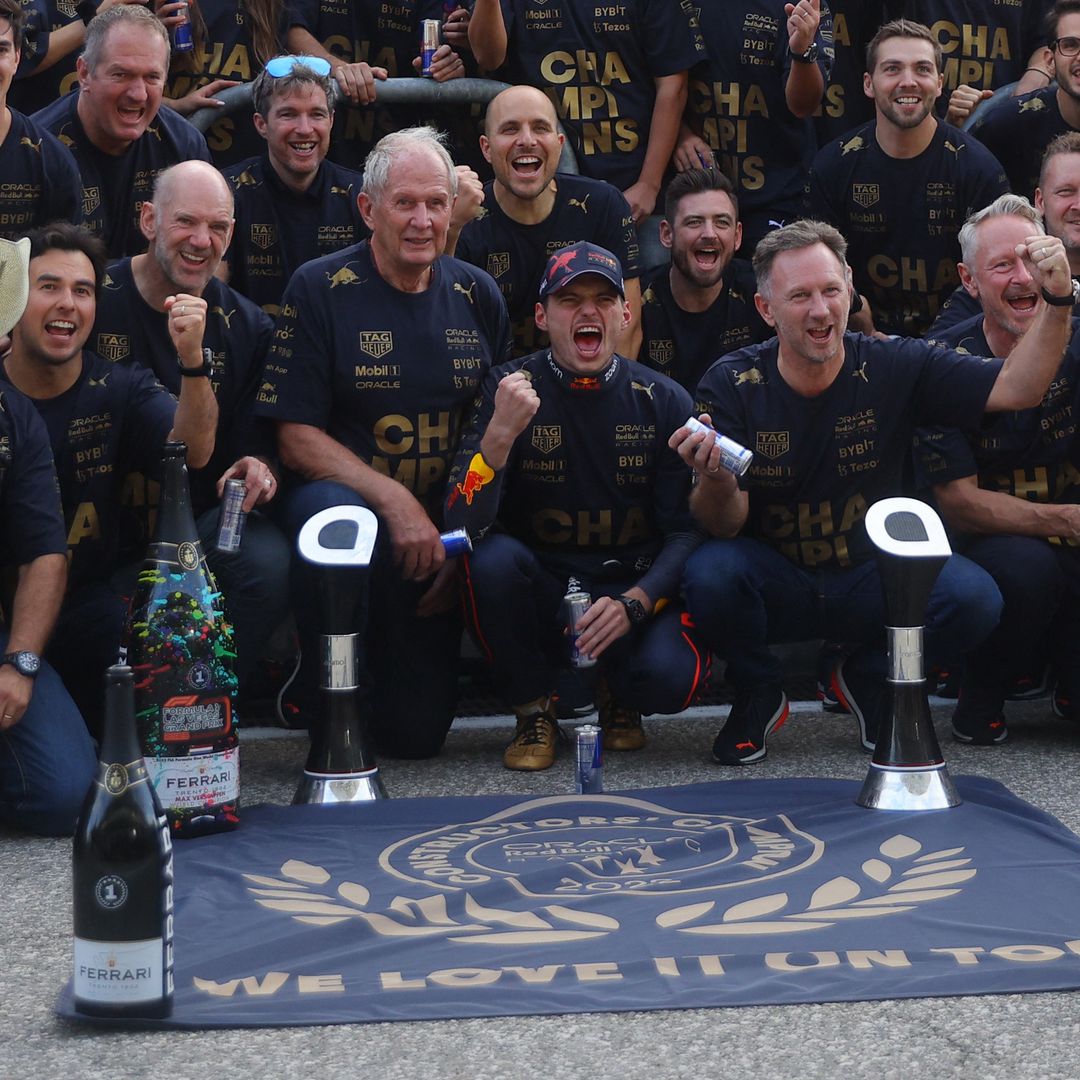 Red Bull celebrates after winning the Constructors Championship at the US Grand Prix in Austin, Texas. Photo courtesy of Brian Snyder/REUTERS.

Barreling through corners, twisting through curves and blasting away on straights are all a part of the international racing circuit known as Formula One, or F1. This has always been what the sport is all about and it was nothing less in the 2022 season. With drivers battling their way to the top there was plenty to cheer about. On Oct. 23, Max Verstappen and Red Bull were finally crowned champions after a long season.

F1 scoring is simple: In each race, the top 10 finishers earn points based on where they place. First gets 25, second gets 18, third gets 15 and so on. With those points, there are two different championships each team is trying to claim. There is the Drivers’ Championship, which is for individual drivers who race against one another to win the title While the Constructors’ Championship is for each team who have two drivers competing for the crown.

For the past eight seasons, the Mercedes F1 team has taken the Constructors’ Championships and were the most dominant team on the grid. This year though, there was a new team on the block. Red Bull Racing took the title and dethroned the once-dominant Mercedes team.

First-year computer science major Harry Savchuk was first introduced to the sport of F1 by his mother. She grew up in Australia and as Savchuk grew up he was brought to the Australian Grand Prix with her. Savchuk — a McLaren fan at heart — talked about Red Bull and their recent success.

“I’m sure Red Bull’s done great things themselves, but maybe also Ferrari and Mercedes got a little comfortable with their positions and expected to come out on top,” Savchuk said. “So when Red Bull put in a bunch of work and a bunch of money into marketing and such, I think they snuck up this year and just took the spot.”

Coming into the season, Mercedes and Ferrari were favorites and Red Bull was not that far behind. They have two top-tier drivers — Max Verstappen and Sergio Perez — and have become the best of the best — evident by their performance this season. Red Bull’s success can also be attributed to errors and the falling off of some of the other top teams in F1.

After building a successful and race-winning car in the 2021 season, Mercedes lost some of their brilliance. It started with preseason testing where all the teams head to Brazil to test their cars and see what can be done to make them better by the time the season starts. At these sessions, Mercedes was shown to have a much slower speed down the long straights than Red Bull or Ferrari, and that trend continued all season long.

Ferrari made management and strategy mistakes that led to their drivers losing out on race wins and podium finishes. First-year health sciences major Jacob DuBrava talked about a key race he remembers where Ferrari messed up.

“You can look at Monaco, for example,” DuBrava said. “[Charles] Leclerc qualified first, through most of the practices he was first, and he was first for a good amount of the beginning of the race. Then they did the double pit stop and they clearly should have told him to stay out and so it’s simple mistakes like that.”

The team from Italy also managed nine “did not finish,” DNF, this season, with six going to Carlos Sainz — the most out of any driver so far — and three going to Leclerc. Ferrari’s poor strategic choices and DNFs combined with Mercedes building one of their more poor-performing cars in recent history made it the year for Red Bull to take the crowns.

Now, crowns mean plural, and there were two up for grabs. Before Red Bull fully won as a team, it was their top driver Max Verstappen winning the World Drivers’ Championship in blowout fashion. Verstappen won the WDC at the Japanese Grand Prix on Oct. 9 and his margin of victory for the championship was 106 points.

This is Verstappen’s second WDC. He won his first in 2021 which is considered to be controversial by the way it ended, so this was his first championship that he won outright and had the opportunity to celebrate without worrying about anything else.

Ben Varner, a senior mechanical engineering and economics major, is a fan of Red Bull and spoke about his reasoning as to why this championship was Verstappen’s and Verstappen’s only.

“I think last year was unfortunate that he didn’t get to celebrate as he should have, but I think [winning this year] is great,” Varner said. “I think he’s one of the top three drivers in the world and it’s fantastic.”

It was a year dominated by Red Bull in every fashion of racing. They won as individuals and as a team and exceeded all expectations. Will this dominance continue in the future? Time will only tell.