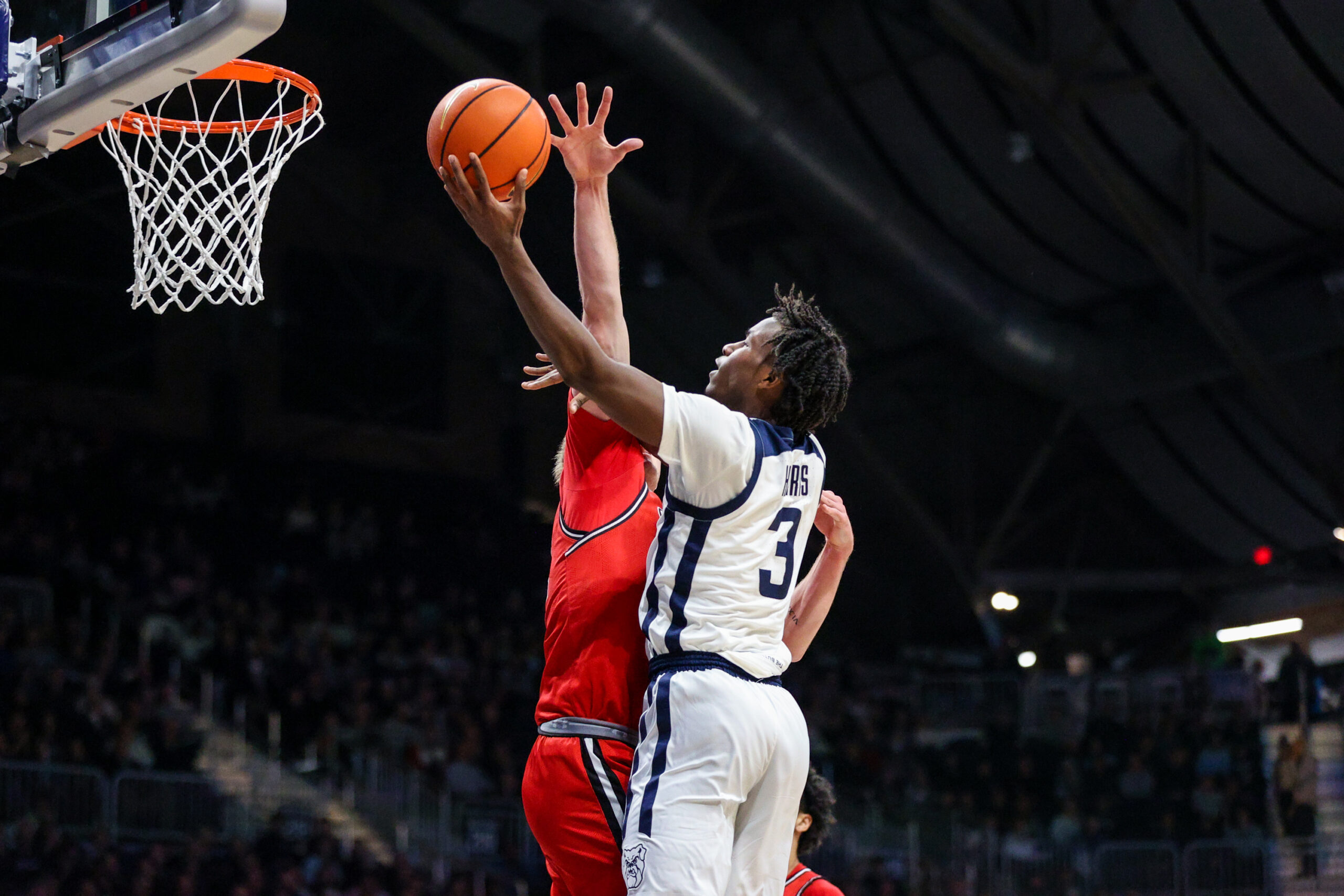 Junior guard Chuck Harris goes up for a layup over a Saint Francis defender on Nov. 17. Harris ended the game with 22 points. Photo by Claire Runkel.

The Butler men’s basketball team earned their second win of the season at home with a 95-67 victory over the Saint Francis Red Flash. Junior guard Chuck Harris led all scorers with 22 points — doing most of his damage in the second half with 15 points in the final 20 minutes. Three other starters joined Harris in double digits. Graduate student guard Eric Hunter Jr. added 18 points on 8-11 shooting. Sophomore guard/forward Simas Lukosius ended the game with 15 points and six assists. Sophomore guard Jayden Taylor also had 15 points to go with five rebounds. As a team, Butler shot 70.4% from the field, the highest mark for the program since 2014.

Let’s go beyond the box score on the Bulldogs’ second win in Hinkle.

Welcome back, Jayden Taylor! After shooting 25% from the field in Butler’s first two games, Taylor settled in and had himself an efficient night. Shooting 6-7 from the field and dropping in his only three-point attempt of the night, his production proved to be the missing piece for creating an explosive offense.

Even though Harris was making baskets all throughout the second half, it was his playmaking that was lethal for the Red Flash defense. He racked up a career-high seven assists and said that head coach Thad Matta stressed to him pregame about having confidence in his teammates’ play-making ability.

“Coach preached before the game ‘just trust your teammates,’” Harris said. “Sometimes, I have a tendency to maybe overdo some things and tonight I just wanted to make the simple plays and make better team plays.”

Harris’s backcourt mate, Hunter Jr., also made his presence felt on offense. In the second half alone, the Indianapolis native had 16 points, missing only one of his eight shot attempts.

Graduate student center Manny Bates didn’t have the production we’ve grown accustomed to him having in this game. Playing just six minutes in the first half and 21 minutes total is naturally going to bring your numbers down. Don’t be fooled though, he was still effective — eight points on 4-4 shooting, four rebounds and three blocks. However, when Bates isn’t on the floor, guard play is going to have to be at a high level. If this game is any indication of what they can do, that shouldn’t be a problem.

Is 88% shooting in the paint good? It certainly isn’t bad. The Bulldogs were uber-efficient down low, taking advantage of size and speed matchups all night long. Butler outscored Saint Francis 56-36 in the paint and made 10 more field goals in the area than the Red Flash.

On defense, Butler at times did allow some easy drives in the paint. They also allowed 10 offensive rebounds that resulted in 13 second chance points. Overall though, Butler was still able to win the battle on the boards 30-22 — thanks in large part to stellar rebounding from the guards. Off the bench, redshirt freshman Pierce Thomas grabbed a team-high six rebounds. Matta hinted that Thomas’s role will continue to be an important one for the team going forward.

“He’s got to be an energy type guy … he’s going to continue to settle into his role and give us what we need,” Matta said.

Butler’s next matchup on Nov. 19 will also be at home, this time against The Citadel. The only other time the two teams have met was in 2015, a game where Butler doubled The Citadel’s point total in a 144-71 rout.

This season, the opposing Bulldogs also come in 2-1, losing their season opener to Clemson before winning back-to-back games against Presbyterian College and Morris College. After losing their top three leading scorers from last season, The Citadel are led by senior Stephen Clark and graduate transfer Austin Ash. Clark and Ash are averaging 20 and 18.7 points per game, respectively.