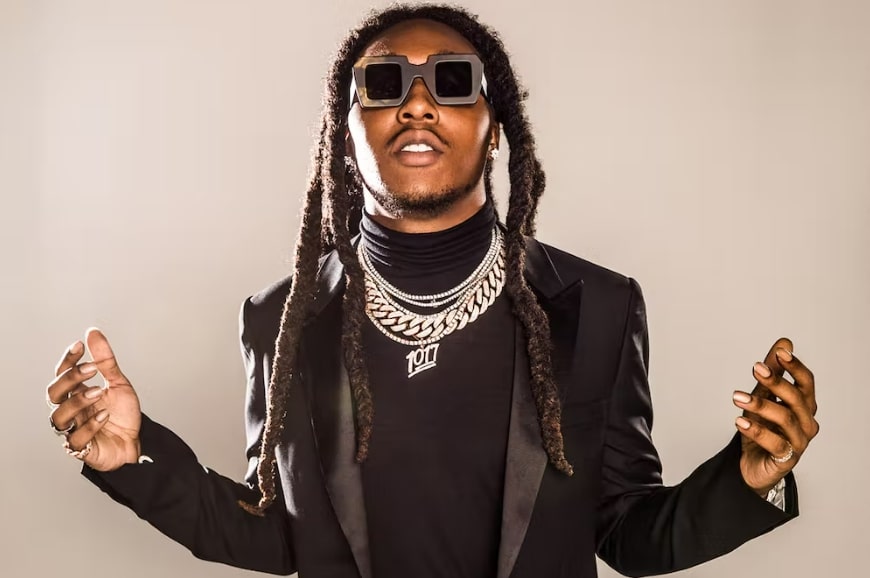 Takeoff, one-third of the Migos rap trio, was 28 years old at the time of his death. Photo by Bryan Steffy/Getty Images.

On Nov. 11, the memorial service of Kirsnik Ball — better known as Takeoff, one-third of the famous rap trio Migos — was held inside State Farm Arena in Atlanta. Ball was shot and killed inside a Houston bowling alley on Nov. 1. Known as the quiet one of the Migos group, Takeoff was known for his effortless sense of humor and impressive rap flow.

Sadly, the death of Takeoff only adds to the list of famous rappers that have been killed by gun violence. Since 2018, 21 famous rappers and hip-hop musicians have been murdered in shootings. 15 of those deaths took place in the U.S., with ages ranging from 20 to 37 years old.

Jahseh Onfroy, better known as XXXTentacion, was murdered on June 18, 2018, after being robbed in his car. The news sent shockwaves throughout the music community as fans everywhere were stunned to hear of Onfroy’s death — who was only 20 years old.

Senior pharmacy major Afam Nzekwe listens to hip-hop and rap often. He described hearing the news of XXXTentacion’s death as “one of those moments I remember exactly where I was” and the first time he noticed that this cycle was a real problem.

“[XXXTentacion] dying was like the first time that I realized like ‘Wait, this is a problem,’” Nzekwe said. “Because you read about the Biggies and the Tupacs … I didn’t really live through that. And then that was like my first [time thinking], ‘Oh, that’s a young prominent artist in my life that has just now passed away.’”

Another rapper that was recently killed, Rakim Allen, also known as PnB Rock, was robbed and shot on Sept. 12, 2022, in Los Angeles. Allen’s murder added to the notion of gun violence being attributed to rappers.

For college-aged rap fans like Nzekwe, the issue of gun violence has only become a more common issue within the rap community in their lifetime. When big-name rappers like XXXTentacion, Pop Smoke and Takeoff pass away, the knee-jerk reaction is to post a photo or a favorite song by the artist on their social media, using hashtags like #RIP or #GoneTooSoon. What is rarely seen, however, are calls to fix the larger systemic problems that are at play in these deaths.

Owen Beute, a sophomore environmental studies major and a fan of hip-hop and rap, says that the responsibility for why this issue still exists spans far past the rap community.

“I think it’s important to realize that no one wants [gun violence] to happen, but it’s possibly an equity and equality issue, [rather than] just a musical issue because it’s not the rap community, in particular, that’s responsible,” Beute said. “It’s the underlying tensions and communities and the poverty line [and] the [inability] to escape poverty.”

The notion that rap music is too violent has been around for decades. From N.W.A. and Snoop Dogg to Lil Durk and Tee Grizzley, gangsta rap has continually been seen as the culprit for violence within the rap community. There have even been scholarly articles about the “violent messages that gangsta rap promotes.” What these articles don’t highlight, however, is the root of the violence.

In an Instagram post by Impact, writer Kaysia Elaine explains how rap music is only a reflection of the communities that these artists come from. Elaine writes that “the problem is not that a musician rapping freely about murder, but rather that murder is common within their life that they are desensitized to it.” Some rappers within their lyrics are talking about the poverty they escaped from and how their friends and families might still be stuck in that life.

When people listen to their favorite rap songs, especially songs that fit within the sub-genre of gangsta rap or drill rap, they often don’t listen past the melodic beat and analyze the lyrics. The topics that these rappers talk about are more times than not based on true stories of gang violence, drugs and poverty they faced before making it to stardom. Listeners may be privileged enough to never have to live through those sorts of traumatic experiences, so it can easily become an afterthought.

The same sentiment can be shared for record labels and governing officials, which Elaine eludes to as groups who should be assigned part of the blame for the deaths of young rappers.

“Labels sign these artists aware of the grim lyrics that are inspired by their circumstances and the psychological impact of growing up in these conditions,” Elaine wrote in the Instagram post. “But, there aren’t enough preventative measures to ensure musicians stay alive after signing.”

Looking from the outside, it may seem that having bodyguards and detailed security is enough to protect these stars. Sabrina Stock, a senior psychology and English double major, believes that those measures only address part of the problem.

“If there’s a way a [security] agency can help … there is logic to that,” Stock said. “It’s putting a bandaid on the wound without really thinking about the underlying issue. You could have as many people watching over these celebrities and artists as you want. You could be safeguarding to the max, but that’s still not going to address the problem of gun violence at its core.”

It also certainly does not help when governing officials, such as New York City mayor Eric Adams, claim that declaring a “war on drill rap” will actually produce positive results and keep people safe. Where are the efforts to bring these people out of unstable living conditions, so they won’t be forced to believe that crime and violence is their only option?

When these famous rappers continue to die so young and so violently, oftentimes, the moment takes precedence, not the cycle.

Nzekwe emphasized how the conversations over these deaths end up dissipating with no action being taken.

Time after time, it takes the death of someone famous for people to take notice. Talented young artists seem to be taken for granted. Instead, give them their flowers while they are still here. Listen to them and listen deeply. Because it is unknown when it may be our last chance to do so.