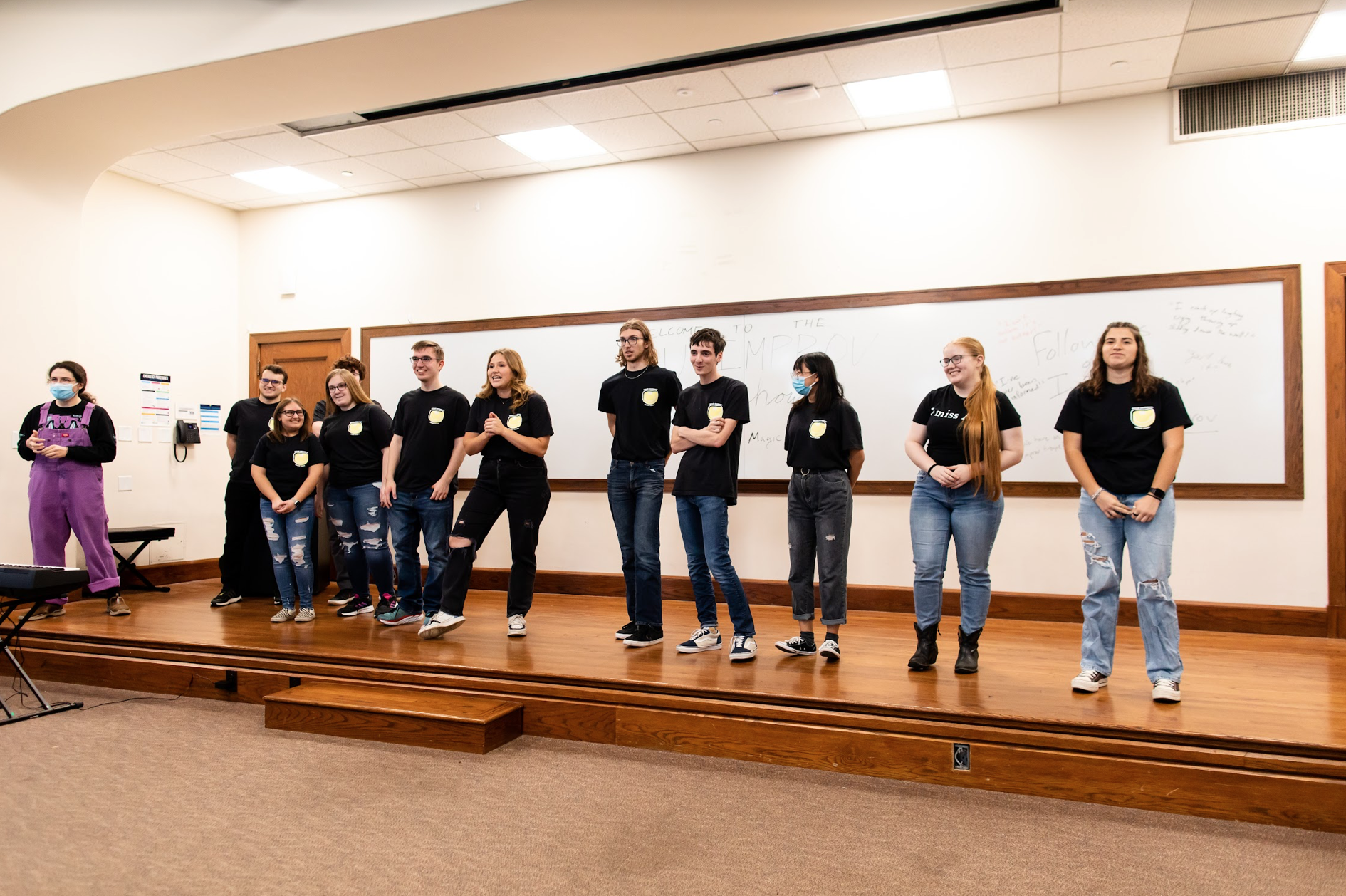 Grace Gordon, a senior strategic communication major, is a co-leader of the troupe. She described the structure of improv shows. She also noted how this year has been the best turnout for a show she has ever seen. She is excited that the Butler community has gotten more involved over the years.

“Improv shows are really exciting because we play a lot of games,” Gordon said. “When you think of games, it’s more of practiced improv [and] skill development opportunities. There’ll be a lot of skits; there’ll be a lot of word play [and] some opportunities for musical improv. It’s all built around suggestions from the audience, which is really cool and unique to any other theatrical experience.”

To be a part of the Butler University Improv Troupe, no prior experience is necessary. In their practices, they play a variety of improvisational comedy games and learn new improv techniques. Each semester, they perform these games.

Gordon said that she has seen a lot of people grow through improv this year. She encourages people to join, even though it may seem stressful at first. She notes how improv can teach people real-world skills.

“I think a misconception of improv is that you have to be super funny to do it, which is just not true,” Gordon said. “As long as you trust the people you’re working with … and are open to the opportunity to mess up a few times, you’re gonna have fun. We do [improv] all the time in our daily lives. When you go to an interview … being able to think on your feet and talk about past experiences you had are really important. You build those skills up at improv.”

Team building and community is a big part of what makes the Butler University Improv Troupe so special. Everyone uplifts each other and encourages each other to do their best and grow.

For Orly Trachtman, a sophomore psychology major, it is her second year being involved with the troupe. She notes how the troupe is different this year.

“In the past, it’s been more casual,” Trachtman said. “This semester, [the leaders] really wanted to focus on building a team. A big [idea] in improv is not always trying to be funny, but just letting it happen, [also] working on how you give someone their moment so that you can get yours later.”

Improv as a whole offers a lot of teachable moments and new things to learn. Unlike any other form of performance, improvisation requires thinking on your feet.

Gabe Young, a first-year psychology and philosophy combined major, began improv when he joined the Butler University Improv Troupe this year. Although he had been involved in theatre before, this is his first time performing unscripted work.

“The funny thing with improv is, it’s simple,” Young said. “It’s complex in its simplicity. On the one hand, there are very limited rules. At the same time, you don’t have a lot of things to guide you. There’s two two key [responses in] improv: ‘yes, and’ or ‘no, but.’ You don’t want to say just yes or just no, because then it derails everything. It just stops. With improv, you want to keep it constantly going.”

By being a part of the troupe, Young has benefited greatly from interactions with other students.

The group meets every Thursday at 8:00 p.m in Lilly Hall, but it is not required of members to attend every meeting. Some people try out one practice or come every few weeks, while some come each and every week. For updates, checkout the troupe’s Instagram account @butler_improv and their Engage page.