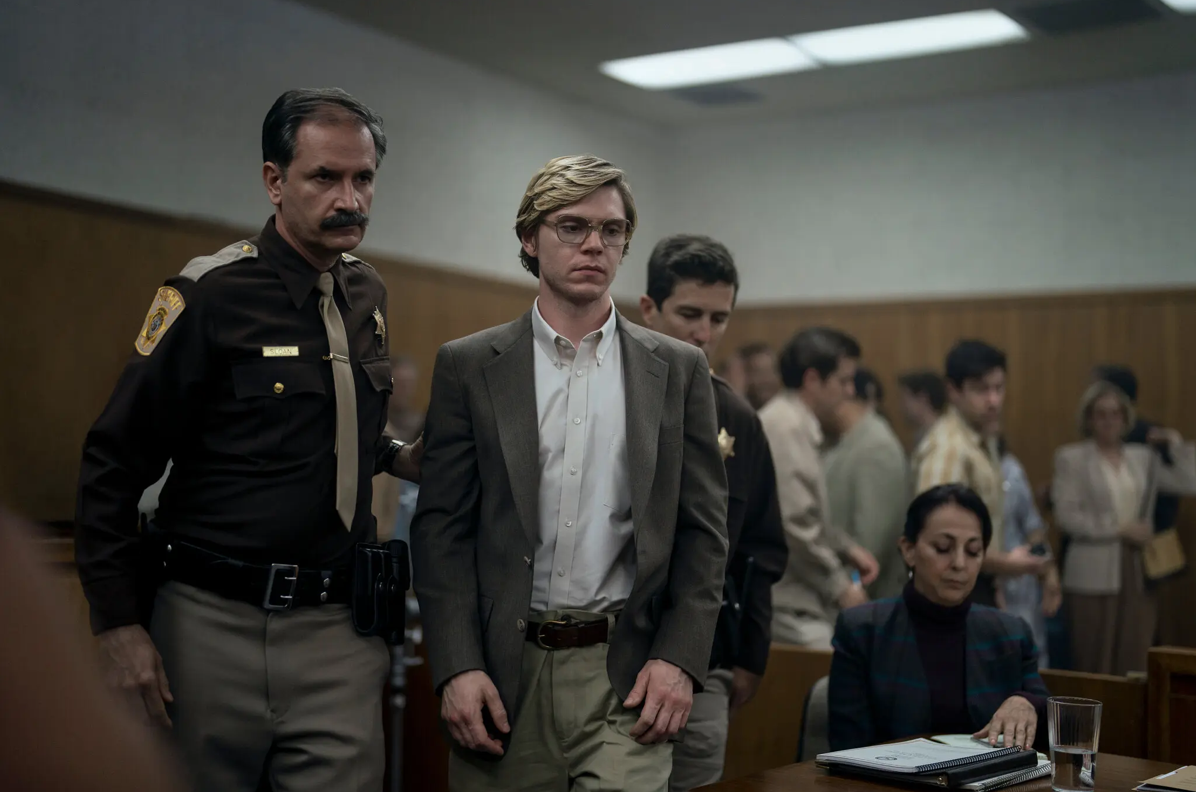 Dahmer’s crimes, which were racially motivated, have been depicted in media for years — the most recent portrayal being that of Evan Peters. Photo courtesy of The New York Times/Netflix.

Ryan Murphy’s newest project, “Monster: The Jeffrey Dahmer Story,” was released on Netflix on Sept. 21 and took social media by storm. Jeffrey Dahmer and his crimes seem like a tale as old as time, with countless movies, TV series, videos and podcasts discussing the murders he committed. The aim of Murphy’s series is to bring the focus on the victims and how racism, homophobia and the criminal justice system allowed, and nearly encouraged, Dahmer to continue to kill. Nearly all of Dahmer’s victims were gay, Black and brown young boys and men.

The first episode starts off with the night Dahmer was caught. Dahmer brought a man back to his apartment with the intention to murder him. His would-be last victim Tracy Edwards was able to escape and alert nearby police officers. As Dahmer is being handcuffed, Edwards, portrayed by Shaun J. Brown, is seen sobbing, cursing at Dahmer, “You killed my people.” The scene ends with Glenda Cleveland, played by Niecy Nash, Dahmer’s neighbor who was a Black woman, frantically shouting at the police, “I called y’all, and I told you over and over a million times that something was going on, and you know what you did? Y’all did nothing!”

In the last four episodes, the series seems to be self-aware and addresses criticisms of how the media has talked about the case before. Many characters who depict the families of Dahmer’s victims express their frustration with the media glorifying this tragedy. They claim the media has turned it into a source of entertainment, with books, movies and TV shows profiting off of the murders, people sending Dahmer fan-mail to him in prison and the infamous Dateline episode. In an interview for Dateline, Dahmer went into detail about his crimes, and his family members gave their input on the tragedy.

The show has received mixed reviews, with many people arguing that the Dahmer story does not need to be retold and starting discussions on how the media creates true crime content.

Gabi Mathus, a sophomore criminology and psychology double major, spoke about their thoughts on the show.

“I feel like it suffers from biopic syndrome, but [it] does a relatively okay job of focusing on the victims,” Mathus said. “There’s still an emphasis on, ‘Don’t you want to understand why Jeffrey Dahmer did what he did? Look at his sick, twisted mind, but we should feel bad for him.’ I feel like at this point, that story’s been told dozens and dozens of times.”

Biopic syndrome is the term used to describe how TV show or film adaptations of real-life events try to focus solely on the high-points of an event and leave out other stories or perspectives. Dahmer is one of the most infamous serial killers of all time, and there is an endless catalog of retellings of his crimes. The aforementioned Dateline episode and shows like “Jeffrey Dahmer: Mind of a Monster” let the killer explain the situation himself, rarely giving a voice to the victims.

Throughout the show, there are multiple references to homophobia, whether it be homophobic comments made by Milwaukee police officers or mentions of the beginning of the AIDS epidemic. Dahmer is depicted as weaponizing homophobia to avoid being caught by the police, at one point telling officers to not look in his apartment because they are only going to find “gay stuff.” Episode seven, titled “No One Listened,” follows civil rights activist Rev. Jesse Jackson as he tried to advocate for the victims, specifically pointing out that almost all of them were gay and people of color.

“I thought it did [a] pretty good job at highlighting the major issues with the case — the racism, homophobia, class issues and the police incompetence … highlighting those aspects that let Dahmer do what he did,” Wann said. “Obviously, [the show is about] Dahmer, but I think it could have focused more on the victims, who they were, what their lives were like, because when you focus it on Dahmer, it feels like it kind of glorifies him in a way.”

One of the main parts of the show that is being praised is its focus on the victims’ identities and how they were targeted. It is common for true crime content to focus on the mind of a killer, speculating why they committed the acts they did, but spend a very limited amount of time talking about the victim, their identity and how it may have led to their untimely deaths.

Mia Fazio, a senior organizational communication and leadership major, appreciated the approach, but purposely chose not to watch the series.

“So often in the media we see people of color get hurt, and then to watch someone like [Dahmer] who did target people of color, and how companies create more ways to consume his crimes, makes me so sad,” Fazio said.

While the series does follow prominent figures like Rev. Jesse Jackson helping the victims’ families, the families have minimal parts of their story told, without their permission. Since Dahmer’s trial is public record, Murphy and Netflix were not required to, and reportedly did not, ask for the families’ consent to make the show. Many critics have taken issue with the families being left out of the show as family members say that these series continue to traumatize them.

“If Murphy had actually gone to the victim’s families and said, ‘Hey, we’re doing this show. Do you want to have a say in it?’ then it would probably shine a better light on ‘Dahmer’,” Wann said. “The way that House of Hammer went about talking with the victims and talking with the family of Armie Hammer — that’s how something like that should be done.”

True crime’s modern day origins come from author Truman Capote’s “In Cold Blood: A True Account of a Multiple Murder and Its Consequences” and Vincent Bugliosi’s “Helter Skelter,” who were amongst the first writers to publish true crime novels. Both books have been a massive success and inspired other writers to contribute to the genre. By the 1990s and 2000s, stories like Jeffrey Dahmer’s murders, O.J. Simpson’s “Trial of the Century”, the JonBenét Ramsey case and the death of Caylee Anthony captured the public’s attention.

True crime remained a relatively niche genre, with a small audience until 2014 with the launch of the podcast “Serial.” The podcast is hosted by investigative journalist Sarah Koenig as she explores unsolved murders and the American criminal justice system. Many people credit “Serial” as bringing true crime and podcasting to the mainstream since it garnered 80 million downloads in two years. By 2018, the podcast had been downloaded 340 million times.

Fazio explained what draws her to true crime content.

“I was listening to a podcast about true crime content and they said something about adrenaline, and I was like, ‘Oh my God, that’s such a big aspect of it!’ because you’re trying to see what happens next and you can get addicted to that adrenaline,” Fazio said.

The extreme success of this podcast drew many content creators to true crime, but as they slowly gained more popularity, discussions about the ethics of true crime and how they were reported began. There are YouTubers like Bella Fiori, Eleanor Neale and the now defunct BuzzFeed Unsolved series that make sit-down videos and report on a specific case, typically focusing on the victim.

Lauren Moreland, a senior criminology and psychology double major, talked about the importance of looking at true crime media critically.

“In my major, we talk about and learn about the different representations of crime, whether real or dramatized, and how that kind of affects how people perceive crime,” Moreland said. “I’m very critical when I watch [true crime].”

Other creators have come up with new ways to tell true crime stories by mixing different styles of videos like True Crime ASMR, true crime mukbangs and Bailey Sarian’s infamous “Murder, Mystery and Makeup Mondays” series. In a few short years, true crime has become extremely profitable for some content creators and nothing comes from their videos other than entertainment.

Moreland shared her concerns on how profitable true crime media is currently.

“I’ve seen how financial incentives can sometimes, and have, taken a hold on creators and how desensitized people are getting,” Moreland said. “It’s disturbing to me when people talk about really sad and traumatizing events while putting makeup on, as if it’s a fun fictional thing. I think there can be benefits with learning about true crime. It’s just that people don’t put in the effort to make sure they’re talking about things in a way that is safe and isn’t going to encourage wrong ideas in the public mindset.”

While creators have responsibility for the content they make, there are steps that people can take to be responsible and make sure that they are being respectful of victims.

Fazio encouraged true crime watchers to be more cautious of what they chose to watch.

“I think people can consume true crime in an ethical way,” Fazio said. “If they watch or listen to something, and then really think about it and digest it and think, ‘Does this show patterns of things we’ve seen before? Or like, is this just a different case of someone going around and murdering a bunch of people?”

Cutting through a lot of the noise in the true crime community is YouTuber Kendall Rae. She focuses on bringing attention to unsolved cases and often has the families of victims participate in her videos. Many people argue that her format of videos should be the future of true crime.

“I think as long as we keep the forefront of the media that is being produced about true crime, that the story of what happened is the victim’s story and not the offender’s story,” Mathus said.

If you find true crime interesting, one way you can respectfully consume true crime is by doing research on the case on your own. Money can also be a large barrier that victims’ families and organizations who try to help solve crimes face.

“You can always donate to foundations for crimes against women or crimes against marginalized communities or the Cold Case Foundation is a really important resource,” Mathus said. “Even signing petitions to get public attention on certain cases or petitioning to ask for better ethical standards for big media companies like Netflix to be more conscious of how they’re telling these stories.”

“Monster: The Jeffrey Dahmer Story” is now Netflix’s second most watched English-language series in a week, closely trailing behind “Stranger Things 4.” Aside from the show’s mixed reviews, it will undoubtedly have a cultural impact — whether it will have a lasting impact on the way true crime is covered in the media is yet to be seen.