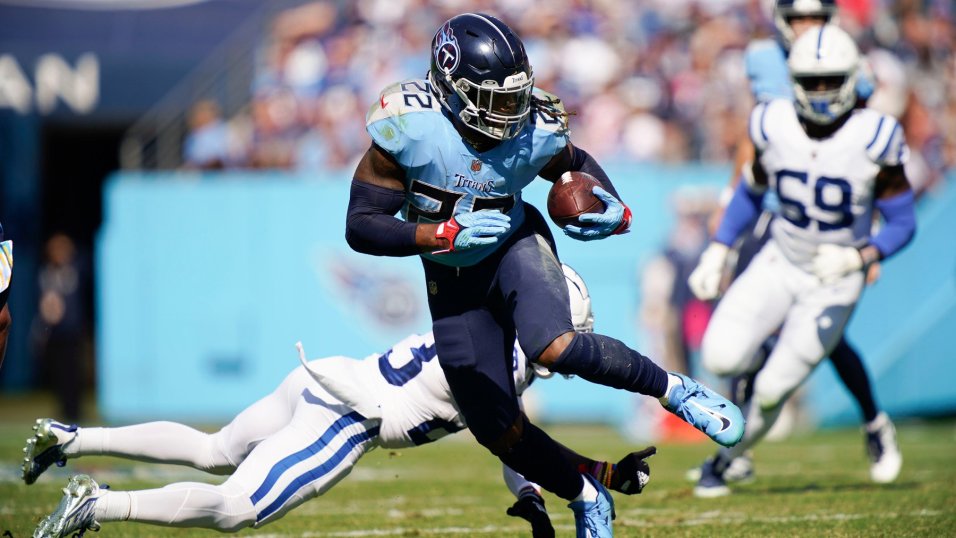 Titans running back Derrick Henry looks downfield after shedding a tackle in Sunday’s victory against the Indianapolis Colts. Photo Courtesy of George Walker IV of Tennessean.com.

After a week where the Panthers traded Christian McCaffery and then proceeded to beat the Buccaneers 21-3, the NFL seems to have been flipped upside down. Whether or not we will have another plethora of upsets this week is unknown. However there is no need to fear, Michael’s week eight picks are here.

Start: Jalen Hurts, Philadelphia Eagles. All season Jalen Hurts has put the hurt on for fantasy owners facing the Eagles maestro. Undoubtedly performing to a tee, Hurts has put up six touchdowns in the air and five on the ground. His receiving core has done nicely to set him up for rushing touchdowns while Miles Sanders and Boston Scott have complemented Hurts both in the flat and on the ground. Hurts’ composure and confidence both in the air and on the ground will give the Steelers all they can handle on Sunday. Not to mention they will have to cover the terrifying trio of A.J. Brown, Devonta Smith and Dallas Goedert.

Sit: Aaron Rodgers, Green Bay Packers. It is simple to look at their matchup against Washington and think that maybe Green Bay can no longer rely on Rodgers to pull a rabbit out of the hat every time it comes down to the wire. Moreover, fantasy owners can no longer expect the former Super Bowl Champion to eclipse even 17 points. Posting meager numbers this season, Packers and fantasy fans alike will likely want to bench Rodgers to protect their season. Buffalo’s defense has been a nightmare for opposing quarterbacks this season and Green Bay might just be the statement game for a defense that has forced 13 turnovers and sacked quarterbacks 19 times through only six weeks.

Start: Derrick Henry, Tennessee Titans. If the Texans’ rush defense was a metaphor this year it would be a hot knife through butter, except they are the butter. Allowing a league-worst, 164.7 rushing yards per game, King Henry has been presented with a feast and hopefully he is hungry, as the Chicago defense certainly will not be getting in the way. Henry saw 33 touches last week —a season-high—and will definitely trample Houston in NRG Stadium.

Sit: David Montgomery, Chicago Bears. The Bears’ offense has been a mixed bag of performances this season. However Bears fans do not worry, Micah Parsons and Dallas are up next. Montgomery is going to have his work cut out for him alongside Justin Fields this weekend as the Cowboys’ front seven has been the engine room and catalyst for the possibly overperforming offense. Fields will not be throwing for more than 200 yards which means the rushing game will be the focus. Montgomery’s unappetizing two touchdowns should make fantasy owners think this is yet another week to eat their words and bench the Bears’ back.

Start: Ja’Marr Chase, Cincinnati Bengals. Joe Burrow’s Bengals have all the arsenal accessories they need to absolutely light up FirstEnergy Stadium and the Browns this weekend. A defense without a leader and a passing defense that runs the rookie formations from Madden, Joe Woods’ will be the third most important Joe in the stadium as Burrow along with Joe Mixon and one Mr. “J Chizzy ” can shred the shoddy secondary. The Browns have allowed the fifth-highest yards per catch in the league –14.1– and Chase should have a field day as Burrow looks to reignite the rookie season scoring streak that made the duo Super Bowl contenders last season.

Sit: Chris Godwin, Tampa Bay Buccaneers. No matter how much Panthers fans hate their organization this year, Sunday may have furthered their rage toward their team. Carolina went on to beat a Tom Brady lead Tampa Bay and did not allow them to score more than a field goal. For an organization that was supposed to be rebuilding, Brady and the offense had a nightmare and their week eight matchup against Baltimore seems to only be a two stair step up. The Bucs’ offensive line is a shell of itself and no matter how many laser line throws Brady makes, Godwin and company will struggle to see big performances unless major changes are made come Sunday.

Start: Zach Ertz, Arizona Cardinals. Booming in three of his seven weeks so far, Zach Ertz has shown signs of rolling back the years to his time in Philly. After a rough season last year, the Cardinals’ tight end looks to continue his rise in stock this week against a defense that allows the most yards per passing attempt and fourth most per completion, 7.9 and 11.5 respectively. Ertz is a guarantee for decent yards this week and fantasy owners should continue to put faith in the veteran.

Sit: Robert Tonyan, Green Bay Packers. As mentioned above the Packers’ offense is sure to struggle this weekend against a bullying Bills defense and regardless of his big week against the Jets with 19 fantasy points, Tonyan has been average at best this season. Aaron Rodgers will be terrorized this weekend and despite the high catch percentage for Tonyan, it is unlikely he will show out in a matchup where Green Bay is the double-digit underdog.

Start: Dan Carlson, Las Vegas Raiders. The league leader in made field goals 16 and a perfect field goal percentage, the Raiders’ three-point man has been the Steph Curry for an offense trying to establish their identity. Booming in half of his games this season he is a guarantee for seven or eight at least week in and week out and no matter the flow of the game, Carlson will get his points.

Sit: Chris Boswell, Pittsburgh Steelers. A 75 percent success rate on field goals would land most kickers a spot in free agency. However, kicking issues have taken a back seat to offensive and defensive irregularities in a team that Mike Tomlin has kept remarkably consistent over the course of his career. Unfortunately, the Steelers as a whole have been underwhelming and their consistency has been nothing short of fragile and Steel City supporters have taken notice. Keep Boswell out of the mix unless Pittsburgh pulls a Pickett fake slide and starts turning things around under Tomlin.

Start: San Francisco 49ers. 24 sacks and nine turnovers for a defense would make anybody want to have the 49ers on their roster for their week eight showdown against a slow-operating Rams offense. Additionally, they have two turnovers for touchdowns and they could get another this weekend as Matthew Stafford has been more interception prone than ever before.

Sit: Denver Broncos. Jacksonville has been a uniquely unusual offense this season and much of that has depended on Trever Lawrence. While Denver has been great defensively booming in two of their games, they also busted in two and whichever way Russell Wilson feels like playing this weekend, this is a trap game for Denver. Trevor Lawrence is coming off a massive week, and with James Robinson out of the picture, Travis Etienne Jr. will be fed and fed often on the ground and in the flat.