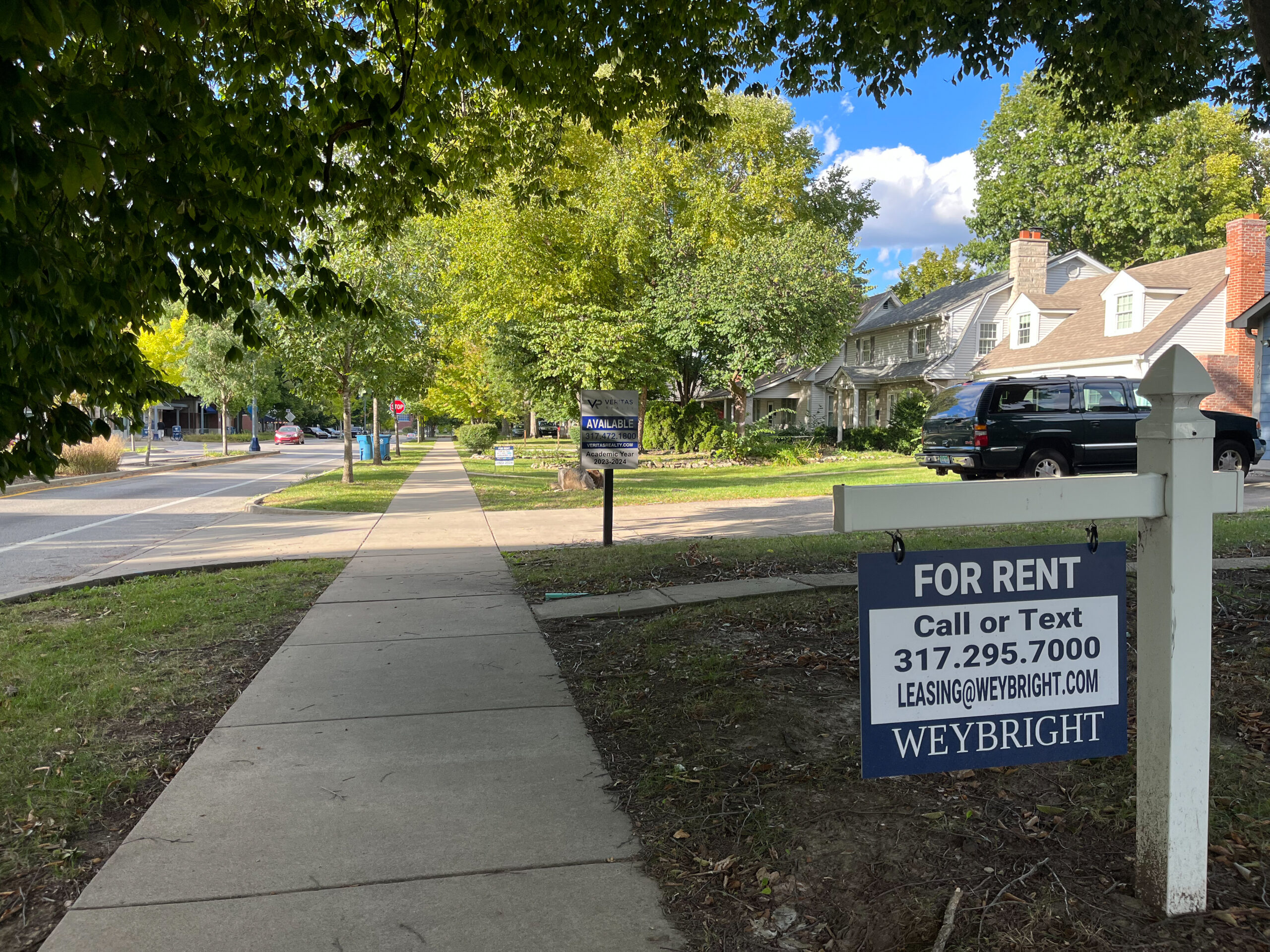 As students settle into the middle of the semester and prepare for midterms, sophomores and some juniors are faced with the added stress of finding and signing leases on senior houses.

Students have differing opinions when asked the question of whether signing a lease to a senior house two years in advance is appropriate. Some might say it is a positive experience to learn about the renting process and be proactive in one’s own student life. Others may claim it is an unnecessary source of stress or anxiety for 19- or 20-year-olds to have to make such significant decisions.

There are several real estate companies that own and rent out houses surrounding Butler’s campus. Weybright Management, Inc., Butler Property Management and free agent Niels Thompson are the major providers, with Weybright being the company that serves the largest number of students.

Of the seniors who live in off-campus housing this school year, Weybright manages the property of about 500 students. They provide similar services to students at Indiana University, Manchester University, Ball State University and Marian University.

Matt Ajdaharian, a senior risk management and insurance major, has been working for Weybright Management for several years as a student leasing consultant. Since his sophomore year, he has toured properties for potential clients, assisted with move-in paperwork for new Weybright residents and helped with general house maintenance.

Ajdaharian said the process of finding and securing a house is a fairly straightforward process with minimal steps and a low time commitment.

“When I first have someone reach out to me, I try to gauge what their interests are, what kind of stuff they’re looking for in a house,” Ajdaharian said. “Then I come up with two or three good houses to tour with the group, we coordinate a date, show them the houses … and from there usually they talk around, and they eventually pick a house. Then it goes from there to signing [the lease] and deposits and all that.”

After a group of students decides on a senior house owned by Weybright, the steps to securing a lease include signatures on the lease paperwork from a maximum of four people and a security deposit. After that, the house becomes theirs to live in during the time stated on the lease.

The bigger concerns for students about signing a lease two years in advance are oftentimes less about the paperwork and more about house availability and the assumption that things will not change among friends in the meantime.

Ajdaharian said for students who wait until junior year or later to find a house, the process is only different in terms of the location of houses that are still available to rent. If a group is beginning to house hunt as juniors, they will most likely be considering houses further away from campus on Clarendon Street or even closer to Broad Ripple.

There is arguably not much harm in waiting to make a decision about senior housing until junior year or even later. Living in an off-campus house will always be an option for students who want to do so, no matter when they decide to start looking. However, if there is a specific house or location that students want, they will have a better chance to secure it by being proactive and signing a lease their sophomore year.

Sophomore students may have a wider selection of houses to choose from by starting the process earlier, however, signing a lease to a house two years prior to living in it can be concerning for social reasons.

Samuel Ingham, a sophomore exploratory business major, signed the lease to a senior house with a group of his friends. He said he agrees with Ajdaharian that it is worth finding a house that you love as soon as you can, but also thinks it can be a risk to choose a group to live with so far ahead of time.

Students tend to agree that once they begin the process of leasing a house, it becomes much more simple and straightforward to understand. However, the uncertainty, confusion or anticipation leading up to that point can cause a great deal of stress.

Cael Read, a sophomore statistics and computer science double major, is currently starting the process of forming a group and searching for houses. He believes the house hunting process could be made easier for students, like himself, if there was more information available about the process.

“I think there could be a little more advertising from Butler about what options are and who you can reach out to …” Cael said. “It can be kind of stressful for a bunch of 19- and 20-year-olds … I think if there was some more advertising that would be helpful.”

For the most part, it is up to the individual or group of individuals to figure out for themselves how to go about finding a senior house. That is a big responsibility, especially for young adults. Some of that stress could potentially be alleviated with increased advising opportunities for underclassmen before they begin the process.

Compared to younger students who are just being introduced to the home-owning process, current seniors feel the pros and cons of senior housing to a much higher degree.

For the majority of students who live in off-campus senior housing, it is the first time that they live full-time on their own in an off-campus residence. As such, they get to experience the freedom and independence that comes with living with friends outside of university residences, however, it is also the first time they will deal with landlords or real estate companies managing the property as they live in it.

Maddi Eary, a senior English major currently living in off-campus housing, talked about some of her experiences with Weybright and how living in a senior house has had its highs and lows.

“We had a bee infestation that took them all summer to take care of,” said Eary. “We filled out like four maintenance requests for it … it was a headache. If they had just taken care of it properly the first time, it wouldn’t have taken so long.”

Seniors are learning the complexities of house renting such as these, but they are also able to enjoy its benefits. Similar benefits that are in store for sophomores and juniors currently facing the challenges of signing a lease.

“I think [living in a senior house has] been really nice …” Eary said. “It’s good to be able to cook for yourself, not have to worry about room checks and make your own rules … Adulting is hard, but it comes with the territory.”